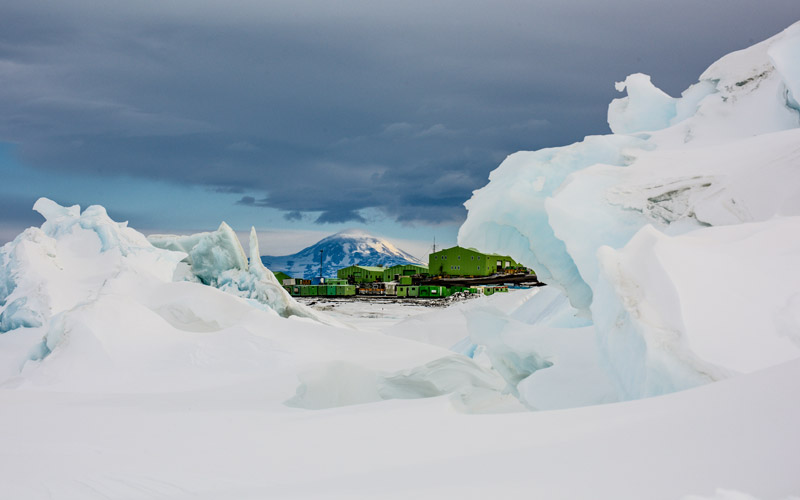 Scott Base in Antarctica, one of the settings for the National Geographic Channel reality series Continent 7: Antarctica. (Photo by Marcus Arnold/NG Studios)

Antarctica is an abstraction: nothing but miles and miles of ice, inhabited only by sea life and the occasional expedition.

That was my conception of the seventh and southernmost continent on our planet before I watched Continent 7: Antarctica (National Geographic, Tuesdays at 10), which quickly expands what Antarctica is, showing it to be a place full of life—and not just wildlife, but people who live and work there.

It is the first long-form documentary reality series to be filmed in Antarctica, according to the network, and the show excels at presenting this place and its inhabitants in a way that makes it seem both enchanting and forbidding.

If you are drawn to the beauty and thoughtfulness of The Last Alaskans, this is a show for you. It’s not quite the same, of course, but it shares an isolated setting inhabited by mission-driven people and packaged in a series that treats its subjects with respect—and alternates between mesmerizing and thrilling television.

Continent 7 flips its world upside down

There is rarely a scene that does not emphasize how isolated and dangerous Antarctica can be. Yet the place is lovingly photographed—the show is produced by National Geographic Studios—and the images are exceedingly beautiful. There’s judicious use of slow motion, and with a few notable exceptions, it’s presented with a light touch.

Transitions between scenes are accomplished with a hypnotic, must-see effect: the screen rotates 180 degrees three times, like an iceberg flipping over and revealing what’s attached to its underside. The first two flips are brief glimpses at life in Antarctica, perhaps some penguins leaping into the water off of an iceberg, or a storm coming in; when it stops flipping, we’re in a new place, following different people.

There are a lot of people—a surprising number, actually, who live and work in Antarctica. The show gives us access to their lives, which are all dedicated to supporting scientific missions. The scientists and support personnel are all good advocates for their work and its importance in their interviews, though few stand out as individuals or as fully-drawn characters.

The place is the star, and it offers continual surprises: the geography, the climate, and the information that Antarctica holds. There is no commercialism or conflict, just an attempt to learn.

That’s not to say Continent 7: Antarctica is boring television; drama emerges from the environment, and the show renders that work in exciting ways, whether scientists are trying to land a drone on sand or a U.S. Coast Guard ice-breaking ship is ramming its way through 10-foot-deep ice.

Whether people are trapped in their tents for more than 16 hours by a storm or diving beneath a ship, like in the scene above from tonight’s episode, they’re only all trying to save our world.