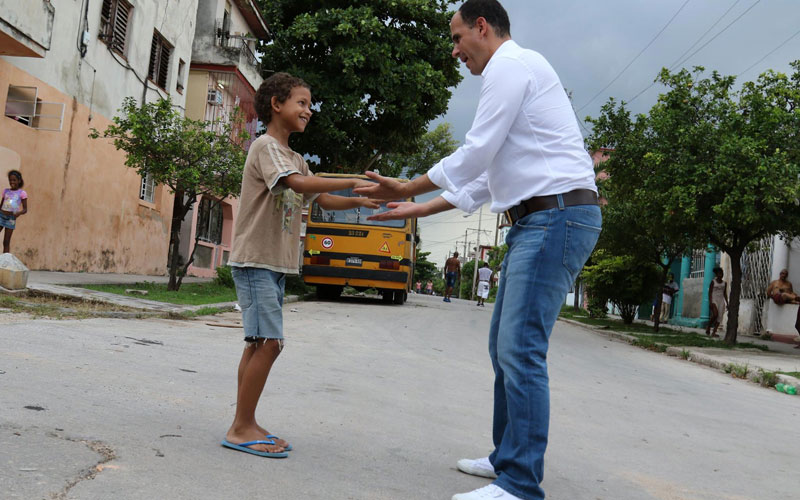 Lemonis, right, during the special The Profit in Cuba episode. (Photo by CNBC)

While The Profit remains an entertaining and strong show that’s grounded in reality, it has fallen more into a formulaic rut this season. This has been somewhat frustrating on multiple levels, starting with the fact that it started as a show that avoided formula so much it was almost disorienting how episodes would just end. Wait, that’s it?

Of the fourth season’s first eight episodes, nearly all followed a structure that was as predictable as the ones used on lesser shows such as Gordon Ramsay’s Kitchen Nightmares. The conflict arrives in the same spot during the hour; the episode ends with a grand reopening. By the Bowery Kitchen Supplies episode, I was basically calling out the beats as they arrived: Here’s the part where Marcus Lemonis asks to see the financials! Here’s the part where he comes back to visit and expresses dismay about progress!

But when its fourth season returned two weeks ago after an odd month-long break, it was entirely different show, right down to the title: The Profit in Cuba.

Marcus Lemonis cannot invest in businesses in Cuba, so instead he just talked to small business owners. Most were open and candid, though their reluctance to discuss some details—especially how much they’re making—was one of many reminders about the Cuban government’s role in their lives. The most striking part for me was how quickly some people would deflect questions or change their demeanor when Marcus asked certain questions, and he even addressed that directly with a couple who ran a bakery: “Is it difficult to talk with the cameras because you worry about people seeing it?”

The hour focused on the opportunity in Cuba, and the tremendous obstacles that still remain. But mostly it just humanized a place that for many Americans is either villainized or idealized or both.

George Lopez and a brand-new business

Last week’s episode was also different, but in an entirely different way. Marcus’ interaction with Los Gemelos, a Mexican restaurant that also makes and distributes tortillas, was prompted by his friend, George Lopez. The business turned out to be not investable, starting with the fact that the equipment wasn’t up to code.

Instead, Marcus proposed starting an entirely new business with its owner, Adelo Ramirez, and George Lopez, a three-way partnership in a Mexican food business called Ta Loco. There was conflict, though in this case it originated with Adelo having passion but no business experience, though he turns out to be an excellent salesperson for the new brand.

Because they were basically dumping an old business and starting from scratch, the formula was upended

George Lopez seemed a little nervous about all of this—and maybe that’s because it seems like he wasn’t exactly calling one friend to help another, though that’s what the editing suggested.

Earlier this year, Los Gemelos was tweeting at Marcus, George, and CNBC star Tilman Fertitta, and the non-stop series of tweets over several months was annoying for me to just browse through, so I would totally understand if this episode happened just to stop the damn tweets. (A few of the many examples: 1, 2, 3, 4, 5) I understand why Marcus might not want to encourage that kind of behavior, but I would have liked a little more detail about how this came about.

The Cuba episode wasn’t perfect either.

On The Profit, the narration—Lemonis in a studio, reflecting on the episode’s events—can feel a little heavy-handed in his favor. That is forgivable since he’s talking about his experience, but it’s still clear who’s the hero and who’s the villain.

But the Cuba episode exposed the writing of his narration as being a little too easy, too obvious. Of course a one-hour episode cannot adequately cover and dissect all of the nuances of Cuban politics and business. But it attempted that a little too often—reaching a little too hard to make sweeping statements or just sounding too broad (“Despite free health care, housing, and higher education, many are struggling”).

The true power of the episode, however, were Lemonis’ personal interactions. Watching him play with a kid on the street, or have one of his subjects reverse the questioning and ask about his sexual orientation, made for terrific television that was enlightening and entertaining.

With Marcus Lemonis’ ability to invest in individual businesses becoming more and more challenging as the show ages, I hope the show will continue to try new types of episodes like these.