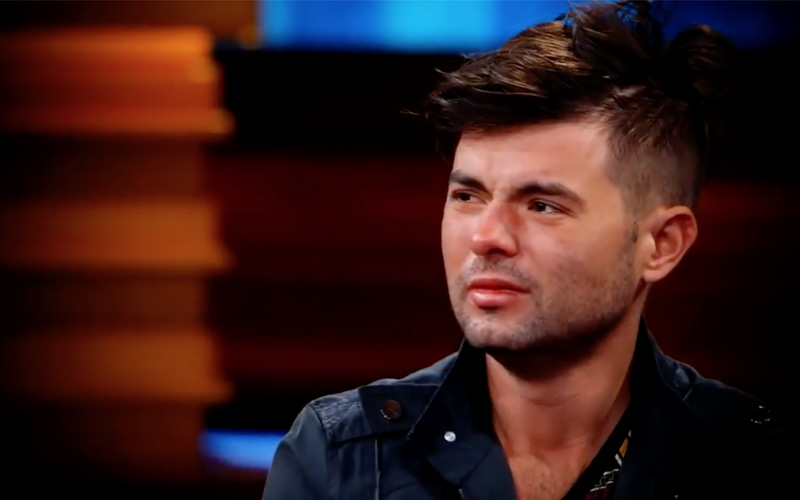 Survivor China's Todd Herzog in a preview for a November episode of Dr. Phil, on which Todd has a seizure.

Survivor China winner Todd Herzog, whose alcoholism has nearly killed him in the past, is currently in rehab after relapsing again. And he will soon appear on Dr. Phil, as he’s featured in a preview of November episodes.

In that preview, below, Dr. Phil says, “He has hit rock bottom again,” adding that Todd—who’s in a wheelchair—has had 12 seizures the day before and two the day of taping, and then another hits as they’re talking.

“Hello everyone. I wanted to let you know that I have had a relapse recently. An extremely bad one at that. I was fortunate enough for my health, sobriety and life to go back on Dr. Phil and sent to treatment. I Have been here for almost two weeks now and am going to continue fighting my disease of alcoholism for a while. I’ll warn you that the episode of Dr. Phil that will be airing will not be a pleasing one, but if you know me in any way shape or form you know that I’m a fighter, a strong and determined man and I am willing to do anything I have to to to kick this demon I have faced in the butt!!! Please, if you yourself suffer from addiction or know or have a loved one with addiction help them find the tools needed to live life. I’m not done with my journey of life. Please feel free to send me mail I’ll do anything possible I can to write back because I know how alone and scary it can feel. I won’t be online for a while because I’m focusing on getting myself to 100% But rest assured I’m doing fantastic and healthy so far and am not even close to giving up and letting my addiction win!

Todd first appeared on the show in 2013, when he was “closer to death” than any of Dr. Phil’s other guests. He was unable to walk on his own, and drank an entire bottle of vodka before filming began.

A year later, Todd was back on the show, after his mother said he was mere “days from organ shutdown and death,” but was resisting going back to rehab in Texas.

How you can help Todd Herzog, according to another Survivor

With the episode already filmed, Todd is apparently back in rehab now, and his fellow Survivor cast member Coby Archa wrote on Facebook that it was Todd himself who reached out for help this time, but doesn’t give other details because that might spoil the episode of Dr. Phil.

However, there is a way for fans and others to help Todd, who’s currently in Texas at the Origins Recovery Center, which says it “offers rehabilitation and treatment for adults with issues of drug addiction and alcohol abuse.”

What I am here to do is pass on the info of where he is and encourage anyone reading this to write him. Todd has requested it from his family and friends that he NEEDS the pressure with support to keep him there.

He has left or not finished every treatment so far because he is so ill. He NEEDS your help.

Take the time to drop him a line and tell him what him getting better means to you as a fan, family or friend. He must stay in treatment and do what the doctors say if he wants to beat this.

Todd is worth it and we all need him to believe in himself enough to get better.