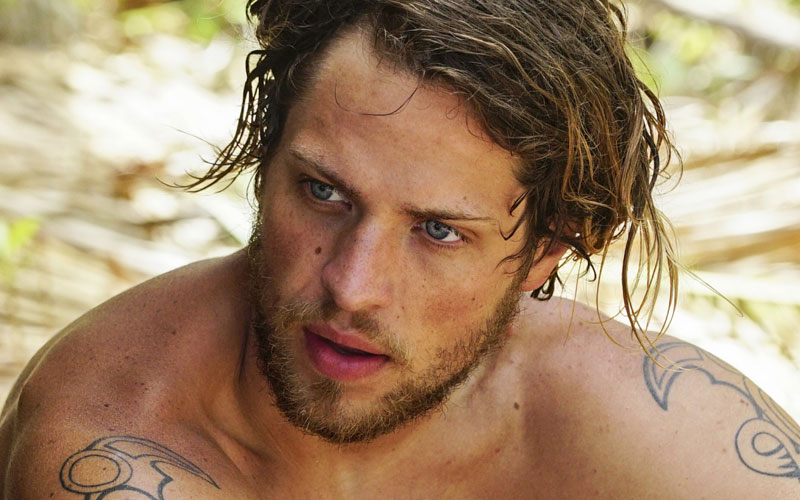 One of the most prominent storylines on Survivor Millennials vs. Gen X has been the relationship between Taylor Stocker and Jessica “Figgy” Figueroa, and now Taylor is having a baby—but not with Figgy.

The day after the episode aired on which Figgy was voted out, Taylor posted a photo to Instagram with a caption that said, “Stoked to announce that I’ll be a snow boarding instructor/dad this winter!” The baby is due in November, according to a photo that Taylor posted to Twitter.

This season of Survivor was filmed from April 4 to May 12, meaning the baby’s mother was definitely pregnant before Taylor, who’s 24, left for Fiji.

On the show, Taylor said at one point, “A million bucks will get you 10 years of doing nothing but fun, but man, if you have a really cool partner like figs, you’re going to have fun forever.”

But in real life, Taylor appears to have had two overlapping relationships. In a now-deleted Tweet that was written in reply to someone, Taylor wrote,

“I had a relationship before the show so when I got back things were pretty crazy. And then things ended with fig after that “

A now-deleted tweet by Survivor’s Taylor about his relationship with Figgy and his pregnant girlfriend.

Figgy is not happy with Tayls

Whether it’s a showmance or a romance, Figgy and Taylor’s relationship during Survivor Millennials vs. Gen X was significant enough to merit:

So imagine being any one of the three people involved here—or a kid who comes across this season of Survivor in 15 years—and knowing what really happened.

In her exit interview with EW, Figgy seems to refer to Taylor’s other relationship when she suggests they were together after the game but broke up because of what she found out:

In Fiji, however, Figgy was into Taylor enough to actually marry him. Figgy told SheKnows:

“I was a Survivor first! Why not do it? I mean, hell, I would’ve divorced his ass afterward anyways. I’m a Millennial. I’m all about doing things for the first time and being that person who says, ‘Let’s friggin’ do it.’ It’s kind of a joke. I wasn’t in love with Taylor at that point. I felt for him, and I did love Taylor at some point. In that moment, I didn’t realize that I actually did love him.”

But now, of course, there is no connection. Figgy also said,

“The legend of Figtails has come to an end. When you’re on an island, it’s completely different from real life, and you find some things about people in their real life that you didn’t know on the island. It leads to a downfall, and it’s for good reasons we’re not together. It’s for the better. If we would’ve gotten married at Tribal Council, it would’ve been the world’s quickest divorce.”