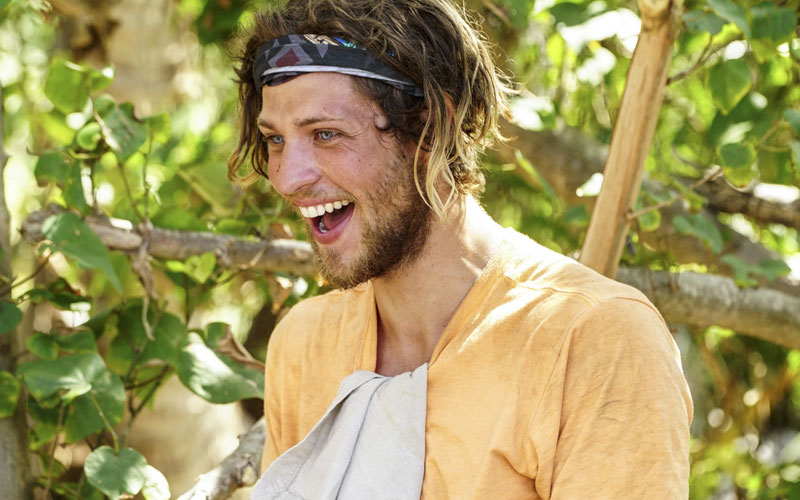 Before the Survivor Millennials vs. Gen X tribe voted to send a second person to the jury, Bret summarized the events of Tribal Council by saying that there had been “several different errors” committed and asked, “Who’s the most culpable?”

Thankfully, this tribe did the right thing (for once) and voted out Taylor, who’d confessed not jut to stealing food, but to gorging on it all with Jay because they thought one of them would be eliminated. His confession came in a dramatic reveal. “Here we go,” he said. “I’m gonna do something. When I got caught eating banana chips, I did hide two jars packed full of food, and Adam helped me do it.”

Hannah basically hyperventilated, previewing what would happen in all of our living rooms.

What was most remarkable, though, was how effective—if disturbing and ultimately non-consequential—how Taylor was able to confess his own sins and spin it to point fingers at Adam. It really was an effective argument: I stole food and hid it and then ate it all, but that guy watched me do it and promised not to tell you all because he also had his own secret. Also he’s going to steal your loved ones family visit from you.

As Taylor sat there with that stolen-food-eating grin on his face, I was both awestruck and hoping Taylor would be struck in the face by an errant bat that would flap around his face and slap him silly.

All Jeff Probst could say to Taylor’s confession at first was just “wow,” and for once, I agreed entirely with his reaction. Of course, Probst then had to try to spin this into his season-long narrative about generational differences, and asked Jessica, “Do you think what Taylor is expressing is millennial?” No, it’s just stupid—like your question! Zing!

So much eating for an episode of Survivor

The editing had to work hard to present alternate scenarios to Taylor’s exit, primarily focusing on the anti-Adam alliance, as Jay tried to convince Hannah and Zeke that Adam was more awful than Taylor. (It appeared to work; perhaps they were just humoring him.)

The episode also introduced an odd, from-nowhere grudge that Sunday suddenly has toward Jessica. Why does one of the only three women left want to target another? She’s annoyed, apparently.

But most of the episode was about food. Between Taylor’s nighttime beach snack and Jay and Taylor’s pre-exit “last meal” binge, there was a surprising amount of eating. The reward challenge sent the winning team—the one selected by Chris, which won easily in a “blowout,” as Probst called it—to a resort where they feasted on food poolside.

Then the immunity challenge offered the players a choice: play for immunity or eat and have the editors constantly point out illustrate your piggishness by cutting from the competitors struggling and your eating, complete with gross eating sound effects. Will and Zeke opted out, tempted by grilled ham and cheese sandwiches and beer. (Random fact: Fiji allows 18-year-olds to drink, but Probst wouldn’t allow Will to imbibe.)

But of course, it was Taylor’s food hoard that had the biggest effect on the game—and ultimately, and finally, led to his exit.

Watching Jay and Taylor gorge and strategize may not have indicted an entire generation, but it was like watching a parody of Survivor, a bad SNL sketch that uses second-string players whose only effective impressions are of stoners.

“Do it! He voted out Figgy! Do it, dude!” Jay said to Taylor after Taylor revealed that Adam had a secret advantage, and Taylor suggested he could out Adam in front of the tribe.

In his exit confessional, Taylor said he “made a new great friend, his name is Jay.” He also told us, kind of as an afterthought, “I got a girlfriend,” which was apparently not a reference to the woman he’d impregnated before leaving for Survivor but a reference to Figgy, who he had a showmance turned romance with until she discovered that he was already in a relationship.