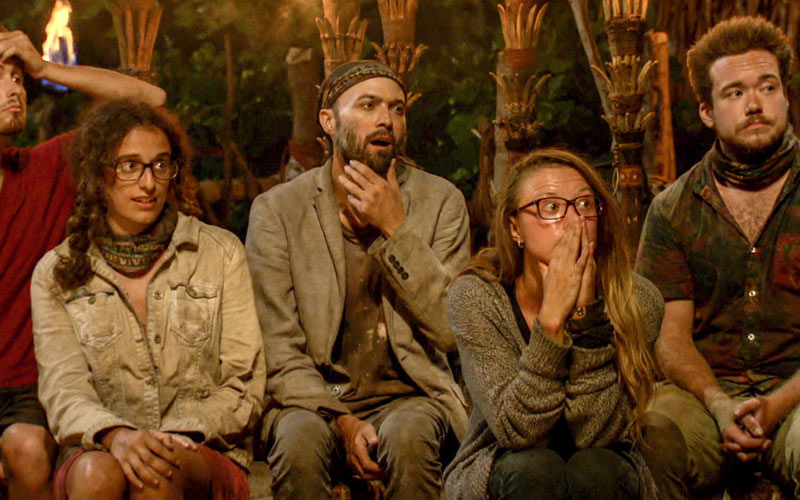 The two Thanksgiving eve episodes of Survivor Millennials vs. Gen X resembled—if you will humor me a little—a Thanksgiving feast. The first episode was meticoulusly laid out, a great table of gossip, the sloppy mashed potatoes of David’s journey, the gravy of his immunity challenge win, and the whipped cream of Gen X civil war sending Chris to the jury. It was the sort of idyllic Survivor episode, full of rich character development and strong challenges.

And then, with the preparation done and the table set, everything fell apart.

There was brief but frantic gorging before the family turned on itself at the second Tribal Council, with simmering animosities rising to the surface—Bret mocking David’s emotional outbursts, winged beasts landing on Taylor, and so much whispering it wasn’t possible to understand what was happening.

And I can’t help but think that, as Jessica looked down at the black rock in her palm, she must have felt like many of us after a Thanksgiving meal: All that anticipation and hope and work, and it’s over already? Are you serious?

How disappointing for her! And how delicious for us! There’s something about Thanksgiving lately that brings out the best in Survivor (remember this?), and I am grateful for it.

Jessica was a target from the start of episode one. Though Adam was ready to vampire the heck out of Jay (“I can taste his blood in my mouth”), Chris was gunning for Jessica, which he admitted was 90 percent strategy and 10 percent revenge.

During this long pre-reward challenge period of strategy, we had one of the greatest sequences in the show’s history. Will confessed to Zeke that Jay had an idol, was “a way to build trust,” he said, adding that “telling one individual who I need to build trust with definitely doesn’t hurt my game.” Then:

After that, strategy took a back seat to emotion for most of the rest of the episode, flowing during and after the reward challenge. Because the tribes would be split into two teams, leaving one person unable to compete, David tried to bail, and Jeff Probst, sensing a story, turned it into a moment. “These guys have really been helping me deal with my anxiety and fear,” David cried—and then went on to apologize to his losing team for their loss, even though it was not his fault.

The tears continued during the reward, which took place just offshore from their beach, on board a boat where the winning team at pizza and burst into tears when someone showed up holding a tray full of letters from home. While everyone was sobbing, most of the focus was on Adam reading a letter from his brother, which mentioned his mother, who we’ve previously learned was being treated for stage four lung cancer during the time the show was being filmed.

There was also emotion on the beach, where David started crying again while he and Ken made their Survivor dinner (“my whole life I’ve had this gigantic fear of death … it morphed into a fear of life,” he said). David followed this by winning individual immunity, and then teaming with Ken and Jessica—and basically everyone else—to get rid of Chris.

At Tribal Council, Hannah created a new Survivor term: not an alliance and not a voting bloc, but a “trust cluster.” When Probst immediately embraced it, Hannah was overcome by fan ecstasy.

Aside: I was overcome by fan ecstasy during the second episode’s Tribal Council when suddenly DGAF Bret started mocking those terms and said, “Enough of this. Give me a break!”

Second aside: I keep forgetting Sunday is a cast member.

Episode two’s reward challenge began, coincidentally enough, with a rock draw, though it was for a reward: the odd person out would automatically win the challenge and go on the helicopter reward. (Let’s pause for a moment to reflect on how Survivor appears to be purposefully designing team-based reward challenges that leave one person out. This episode had 10 people; they designed a challenge for nine.)

Jeff Probst was in a mood for this challenge, introducing it by saying the winners would get a “nice chance to strategize away from all the losers.” And then he started relentlessly mocking the Survivors, even though the challenge of slithering through sand with their hands and feet bound was providing enough comedy on its own.

Some of Probst’s comments were innocuous—”Zeke looks like a Survivor mime”; he pointed out Bret’s “white butt glowing in the sun”—but there was one really cruel comment, when he said, “Hannah like an elephant seal, trying to beach herself.”

At the actual reward, the tone shifted from comedy/cruelty to character again, as Bret and Zeke bonded as drinking buddies—and Bret came out to Zeke. Though this offered yet another of this season’s look how different the generations are! moment, it was actually one that resonated rather than feeling forced.

After Bret said, “You’re not the only gay guy out here,” Zeke pointed out that he never considered not telling other contestants that he’s gay. Bret, who served in the military under Don’t Ask, Don’t Tell, said that his sexual orientation has “been in my head my whole life.”

The episode played this off as just a moment between friends, but in an unaired confessional, Bret said this was an entirely strategic reveal: “I needed him to align with me, and I thought this might be something—he might see me as more of an equal to him.”

Another unexpected turn of events followed at the immunity challenge. The players had to navigate a maze without looking at it in order to free themselves from behind a Survivor-style cell door, and then complete a slide puzzle. “I will not be saying who’s in the lead and who’s falling behind,” Probst said. But rest assured, he did not stop talking.

Jay was the first to free himself, and started on the puzzle by just flinging pieces around. As I typed what Jeff Probst said next—”This could be over quickly if Jay is good at slide puzzles” and the letters “HAHAHA”—Jay finished the puzzle and won immunity. Or, as he said, he “crushed these fools.” I stand impressed.

When Zeke tried to convince Hannah that David is the most threatening person and should go next, Hannah balked, and Zeke immediately knew that this was a pivotal moment—whether she was going to “play the rest of this game with David…or with me.” She did not even attempt to convince him their alliance was still intact, so Zeke turned against Hannah.

That was such a quick scene, but so much took place, and it was all in their body language and the hesitation in language. We were watching the game change, and watching two people realize how it was changing.

So, with that alliance over, Hannah and David targeted Zeke, and told David, “I’m probably going to need your idol tonight.” Had she received it, this Tribal Council would have had a very different outcome, but David did not give up his idol to his new BFF.

Instead—and this is so nuts—he gave it to Ken. Ken! Who received no votes!

After David presented his idol to Jeff Probst, he walked back to sit down, and Adam blurted out, “they were whispering over here, they want to vote for Ken.” So David said the idol was for Ken, making Ken immune for no reason from the vote and the subsequent rock draw.

There were two ties, but again, Jessica seemed to be on the verge of switching and voting out Hannah. Zeke spelled it out to her: “Jess, are you willing to go to rocks?” But she seemed conflicted and stuck with her earlier vote. A second tie vote would mean that they had to decide unanimously, and if they couldn’t, Hannah and Zeke became immune, and everyone else would be up for elimination.

The deadlocked players then fought amongst themselves until Probst cut that short and let rocks decide what they could not. Perhaps this should be a strategy adopted for certain Thanksgiving family dinners.