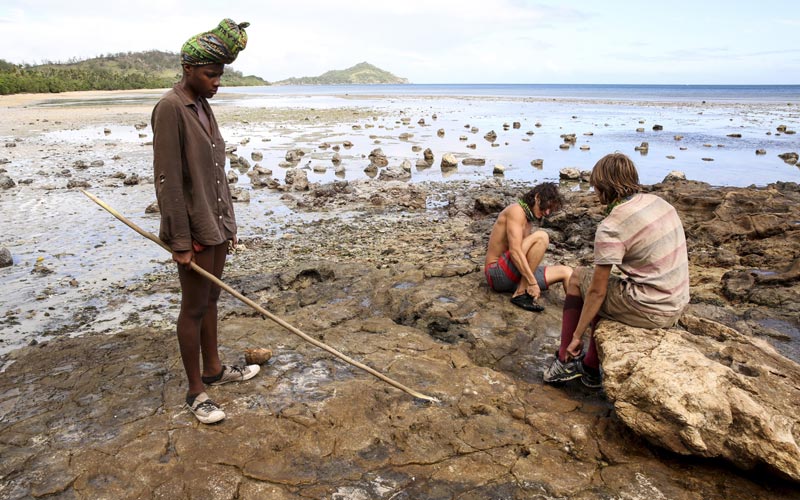 As devastated as I am to see Michaela Bradshaw leave Survivor Millennials vs. Gen X, her exit was quite dramatic—and quite the dramatic reversal. Last week, she mocked Figgy for being overconfident and being incapable of keeping her alliance together. This episode, she went home for the exact same thing.

She had the audacity to think ahead in the game with her alliance. That made Bill and Ted—I mean, Will and Jay—freak out, all that thinking.

Will said, “dude, you’re thinking way too far ahead,” i.e. she was actually thinking. Jay’s brain go “boop,” which I have no doubt is the actual noise his brain made, because “she is freakin’ smart.”

Michaela’s mistake, it seems, was to think in front of people for whom thinking is not a familiar activity. But she was as honest and entertaining as she has been all season, even as she was voted out.

Of course, she made some obviously fatal errors.

First, she was publicly overconfident—for that alone, she might have been an early post-merge target. (However: the preview for next week showed the merge and suggested that the millennials were unified, despite their anti-millenial votes the past two episodes.) At the start of the reward challenge, when Jeff Probst questioned her, Michaela said, “Sometimes you say what you’re supposed to say, not what you want.” She added, “It’s been time for Figgy to go home for a while—bye, Felicia!”

Second, and more critically, was the mistake Michaela admitted in her exit interview (though she didn’t yet seem to recognize it as a mistake). “My focus was the end, and I’m not even at the merge,” she said. A long game is important, but Survivor requires making the next best move, because there are too many variables that can disrupt long-range plans.

Michaela was looking at Probst and missed the fire in front of her, to turn Tribal Council into a metaphor.

All of this led to an epic Tribal Council showdown before Jeff Probst read the final vote, but after it was clear what was happening: Jay and Will teamed up with Sunday and Bret, and voted Michaela off the island. When Michael cried out “what?!”, there was no confusion: Jay said simply—and incredibly—”I did it.”

Michaela turned to Jay and looked at, with bewilderment and annoyance and anger all bottled up into one immobile stare. That did not, alas, make Jay shatter, emotionally or otherwise.

After her torch was snuffed, Michaela realized she’d left her shoes behind, and walked over to retrieve them. She stared again and said, “Damn, Jay. Fuck up something good, bro.”

Behind the scenes with Survivor’s balls

Confession: I don’t know these three tribes’ names. I’ve gotten out of the habit of learning tribes’ names because they’re so often now referred to by their theme, by viewers and by the show itself, and I also know that they’ll be gone sooner than later.

So on the tribes whose names I don’t know:

I suppose I can also not end a recap without noting that Probst was back in full on balls mode for one of the challenges—”release those balls!”—though now that I know Probst does that on purpose, it’s a little less fun.

But here’s some behind-the-scenes balls info about the actual balls.

One of the strong, multi-part challenges—which were not held in the middle of the ocean this time—involved throwing balls and landing them so that they stayed in a narrow groove between two boards. That’s challenging enough, but consider that Survivor’s fantastic art department takes regular balls, such as a basketball or rugby ball, and wraps them with fabric-like material, kind of like paper-mâché. Then they’re painted, usually to match the tribe’s color.

That leaves the balls with rough, uneven surfaces, and also gives them more weight, and can even make them lopsided. You can see that in the photo below, as Chris tries to land the ball for his tribe. Not only does it make the balls look homemade and more natural for the environment, it also makes them much more challenging to handle. Other shows might just use a basketball, but Survivor is not any show.

During a rehearsal I participated in years ago, I remember how strange it was to hold and throw one of these balls. But it’s also attention to detail I really appreciate, because it makes the game look better and makes it slightly more challenging, which ultimately makes for better television. 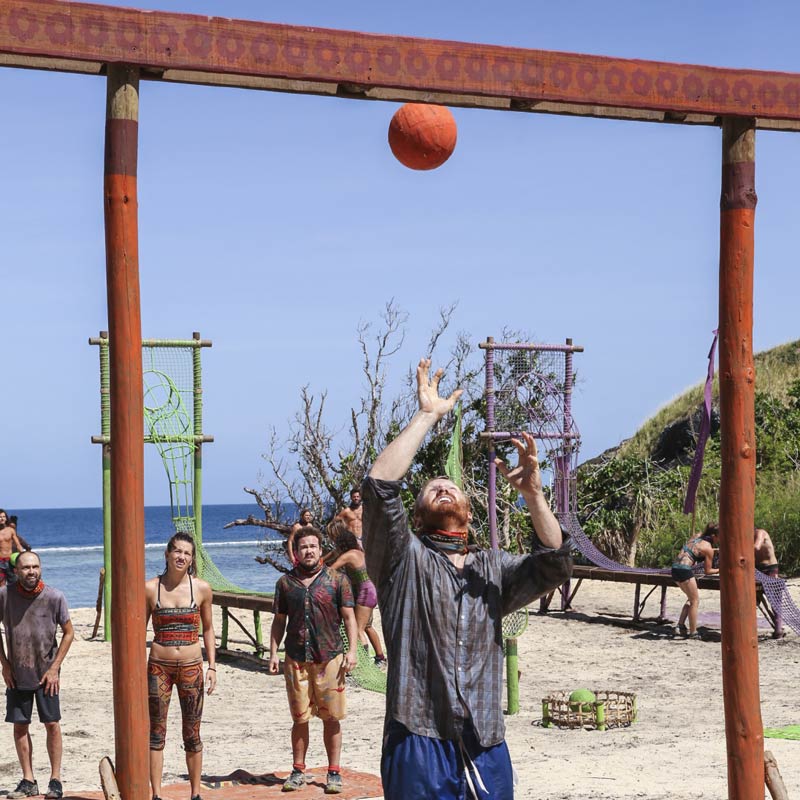 Chris Hammons during a challenge on Survivor Millennials vs. Gen. X. (Photo by Monty Brinton/CBS Entertainment)