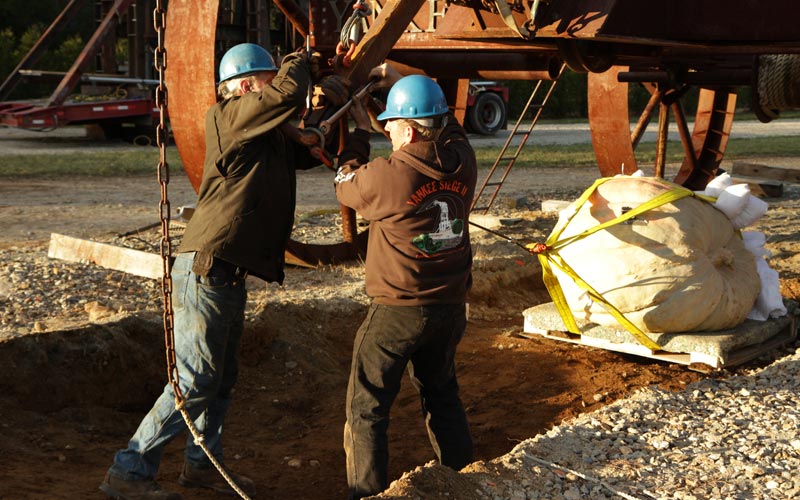 A team prepares to launch a 1,000 pound pumpkin during the 2014 Punkin Chunkin: Superchunk! special. (Photo by Science Channel)

Punkin Chunkin, a televised competition where teams from around the world fling pumpkins through the air with various contraptions, has been cancelled this year. While Science Channel sent a note to media yesterday saying that “due to scheduling changes, Punkin Chunkin will not premiere on Saturday, November 26,” it was actually due to a near-deadly accident that so severely injured a producer that first responders first reported that she’d been killed.

On Nov. 6, when the show was being filmed in Delaware, a cannon exploded and a metal door hit the producer in the head. The Cape Gazette’s detailed report explains what happened:

“It was about 2:45 p.m. as the team Punkin Reaper was preparing to launch a pumpkin from an air cannon. Police say the cannon malfunctioned, blowing off a trap door used to load the pumpkin into place. The door flew into the air before striking the woman in the head and face.

Muzzi said the woman was in the wrong place at the wrong time. A few seconds and the metal projectile would have hit the ground. “It hit her in the hard helmet, and she dropped,” he said.

… First responders at the scene—medics, troopers and other emergency responders—initially said the woman had died after a flying, object struck her in the head, but they stablized her and updated their original prognosis, said Master Cpl. Gary Fournier of the Delaware State Police.”

Philadelphia’s ABC affiliate has video of the explosion taken from a distance, so it does not show the impact.

The producer’s current condition is unknown, as is her name. She’s 39 and was in critical condition when she was airlifted to a hospital. She worked for Sharp Entertainment, which is based in New York and produces the television version of Punkin Chunkin, and which has refused to provide information to media outlets.

The Gazette reported that “event organizers” were not revealing information, and “told participants not to comment during the ongoing investigation.”

Discovery first aired footage of a competition in 2002; in 2008, it became a regular show on Science, which last aired it in 2013. Clip shows aired the past two years because the competition couldn’t secure insurance to cover it.

Science Channel said this in a statement:

“In light of the unfortunate incident at the Punkin Chunkin event on Nov. 6, Science Channel will not air Punkin Chunkin as originally planned. We are sending our hopes and prayers for a full recovery to the injured woman, her family and loved ones.”