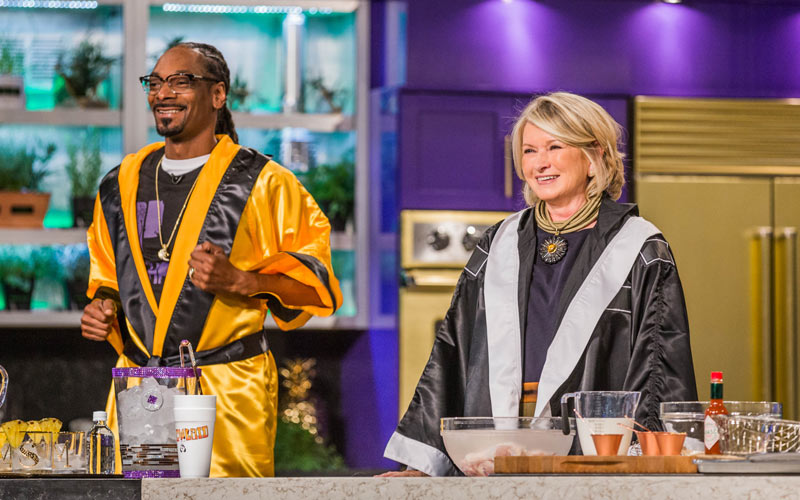 “If you took a buttermilk bath,” Martha Stewart says to Snoop Dogg in the first episode of their new VH1 show, Martha and Snoop’s Potluck Dinner Party, “you’d be whiter.”

One of their three guests, the actor Seth Rogen, says, “If one person knows how to make shit whiter, it’s Martha Stewart.”

The joy of this show—and there is a lot of light-hearted fun—is entirely in that interaction: cooking as an excuse for banter, some of which pushes right up against a line of inappropriateness and/or discomfort, but most of which is just the product of a random group of people who like each other, hanging out and enjoying each other’s company.

Shot in a studio on a set that makes flimsy-looking Food Network sets seem extravagant, and in front of an audience that apparently gets to taste the food, Martha and Snoop’s Potluck Dinner Party (VH1, 10 p.m. ET) has a cooking competition as its primary element. But it is not a cooking competition. It is also not a cinema verite reality series that just follows them as they cook.

Instead, it’s a talk show organized around cooking, with stoves and a table serving as a gathering point instead of couches. At some moments, it resembles Today Show cooking segments; at others, a raucous UK talk show with a pile of celebrities all bouncing witticisms and observations off of each other. There’s even a musical guest at the end.

The chemistry between Martha Stewart and Snoop Dogg is at the center of the show, of course—though in episode one, Seth Rogen gets most of the best zingers. The jokes between Martha and Snoop sometimes relies on their differences, but it’s when they let those external things go—and let go of the obvious—that the show takes off.

While the cooking is a slight afterthought, there is a surprise or two on the stove. That Martha Stewart has ideas and strategies about how to prepare certain foods is expected, but Snoop’s proficiency was a shock. He is not just screwing around in the kitchen; he knows his stuff.

Rogen jokes in the premiere that he thought their two dishes (both prepare fried chicken) would be so disparate that he’d have to lie when he judged to make the contest seem closer. Instead, Snoop surprises with a strong fried chicken that’s coated with hand-crushed barbecue potato chips—quite the contrast from Martha Stewart’s chicken, which has been brining for two days, a length of time that gets her a lot of well-deserved shit.

As they mock Martha for fried chicken that takes days to prepare, Snoop and the guests become the doubting voices in our heads when Martha Stewart—or Rachael Ray, or Ina Garten, or whoever—acts as if a complex series of steps is easy and totally worth the outcome. There’s a level of absurdity to the whole exercise that is Martha & Snoop’s Potluck Dinner Party, of course, but it’s when they’re pointing out the absurdity in each other’s approaches, methods, or assumptions that the show really finds its groove.

When the producers let Martha and Snoop—and their many guests—just cook and talk, ask questions and riff, and gently mock each other, it’s wonderful television, a reminder that differences (and food!) create connection.

However, the producers—the show is from SallyAnn Salsano’s 495 Productions—do not just let that happen. There’s a heavy hand at work, especially in the early part of the first episode. I hope this tight grip is insecurity and that they quickly realized what magic they had if they just trusted their hosts.

But in episode one, Martha and Snoop’s chemistry is also dampened by the time they spend staring at cue cards and reading, which is as awkward as an SNL guest host staring blankly off-camera. There’s a surprising amount of that here, whether they’re working through pre-written bits or setting up the next segment.

In those moments, the show can feel like its title, which is trying so hard to be clever that it ends up being pointless. (There is no potluck in episode one, so the title is inaccurate, but I assume they wanted to get the word ‘pot’ in the title and this seemed like the best way to do that.)

Also not helping is the hour-long length of the premiere, which drags and stretches to fill 39 minutes. Other episodes will be 30 minutes, and that’s a good thing, to use Martha Stewart’s catchphrase. That’s plenty of time for Martha and Snoop to banter with each other and their guests, entertaining us more than their food ever could.