Skip to Content
Marc Summers on the set of Double Dare in the 1980s. (Photo by Nickelodeon)

Fellow children of the 1980s and 1990s, I have terrific news: Double Dare may soon return to television, with its original host, Marc Summers. Whether or not it returns is dependent upon the ratings for Wednesday’s 30th anniversary special  (Nickelodeon, 9 p.m. ET), but if it does well enough, the show could be back early next year.

Yes, it has been 30 years since Double Dare first debuted and allowed its young contestants to win money and prizes, but mostly just get messy in physical challenges and the incredible obstacle course. As a kid, I watched Double Dare and dreamed of opening those teeth and sliding down the jaws of the throat, or spiraling down a slide into a giant ice cream sundae. I also judged the kids who couldn’t answer simple trivia questions or make their way through the obstacle course.

In a story appearing in today’s L.A. Times, I profiled Marc, having spent time with him  earlier this year in Indiana, where he was performing scenes from his life in a two-person show, Everything In Its Place: The Life and Slimes of Marc Summers. The play, written by Tony-nominated actor Alex Brightman, revealed so much of Marc’s life that I didn’t know—and was suprisingly emotional—for Marc and the audience.

Whether Marc and Double Dare return to TV is entirely dependent on how well the show does tomorrow night, in ratings and other signals, such as on social media. As a Nickelodeon executive told me, viewers will “decide the fate of this.”

If it does return, however, Marc has an idea: In an anecdote that didn’t make the story, Marc told me that he’d love to have the new Double Dare include a reunion between teams from the 1980s, with 30- or 40-something contestants who want another chance to play each other.

A reunion of Marc, Harvey, and Robin 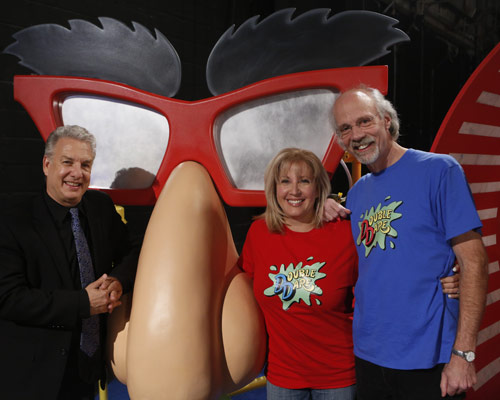 Wednesday night’s Nickelodeon special does not feature any new game play, alas, but will apparently include footage from Comic-Con, where Marc hosted a modified version of the game with Nick stars. (It was streamed live to Facebook, and you can still watch the video.)

It reunites Marc with Robin Marella (who assisted with the physical challenges) and announcer John Harvey (known as just “Harvey”), though the three have never been out of touch in those 30 years, Marc told me.

They were the network’s first stars. Nickelodeon was so young that Marc’s interview on The Today Show with Bryant Gumbel was their first major national press.

In a clip from that interview shown before the play in Indiana, Gumbel frets about the effects of giving kids VCRs as prizes, which seemed so quaint it’s almost charming in its ridiculousness.

But Double Dare allowed kids to have fun and also benefit in the real world, whether it was by winning VCRs, cash, or that coveted trip to Space Camp. And soon it may be doing that for a new generation.