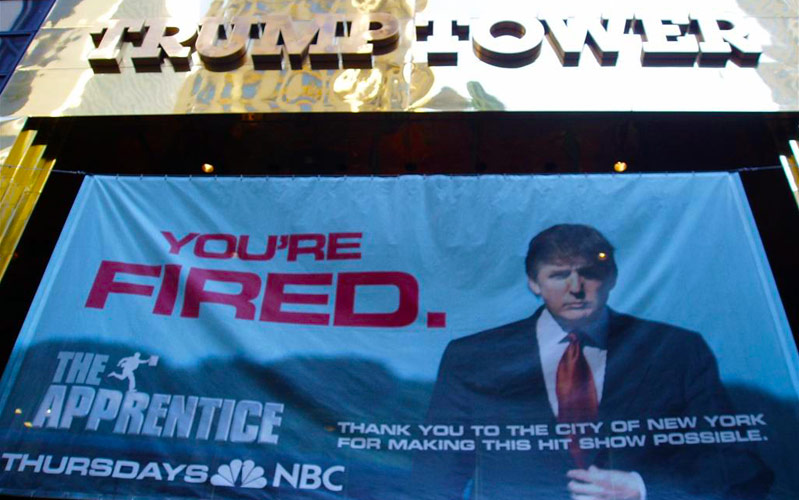 A banner on Trump Tower advertising the NBC series The Apprentice. (Photo by David)

Just over twelve years ago, I wrote a piece asking, “What’s with Trump’s weird voiceovers?”  Discussing the star of NBC’s The Apprentice, I wrote that its “boardroom is also where [that] billionaire, Donald Trump, shines,” and where “he demands answers and casts judgments” and where “sometimes irrational decision-making” was on display. But there was something unusual:

“Listen carefully during the boardroom sequences, especially when Trump issues his rationale for firing, and you’ll notice that the sound quality and audio changes frequently. While Trump speaks in a weird, slower, overlord voice, we don’t see his face and hair, but instead watch reaction shots of the candidates, George, and Carolyn. It seems apparent that some of the audio is being dubbed, replaced by voiceovers Trump records later.

… Are these redubbed lines scripted? Rerecorded to be smoother than the original version? If not, why is the production so bad that Trump’s audio cuts out so frequently, both in the boardroom and elsewhere?”

This was among the earliest instances I’d observed what’s now a common practice: recording new audio in post-production and then layering it over actual footage to make it seem like it was spoken in the moment. As with any editing technique, it can be used ethically or to completely change reality.

So what was happening on The Apprentice? Twelve years later, thanks to Donald Trump’s run for the presidency as the Republican party’s nominee, we have an answer.

How Apprentice’s editing covered for Trump

CineMontage, the “Journal of the Motion Picture Editors Guild,” published a story last month that I missed until hearing its author, A.J. Catoline, discussing it on The Jay and Tony Show Show.

Catoline interviewed editors who worked on The Apprentice from 2004 to 2007. One of them, Jonathon Braun, ACE, said they were told to, “‘Make Trump look good, make him look wealthy, legitimate.’ That was our objective. But that’s what we do as editors anyway, right?”

Part of their task was to ensure that Trump’s decision-making make sense. As those of us who watched The Apprentice know, and as a different, unidentified editor told the magazine, “Trump would often make arbitrary decisions which had nothing to do with people’s merit. He’d make decisions based on whom he liked or disliked personally, whether it be for looks or lifestyle, or he’d keep someone that ‘would make good TV’.”

The editors had to fix this with what CineMontage calls “editorial gymnastics” that “proved a tremendous feat” with Trump.

Braun said the team of editors would have to “reverse-engineer the show to make it look like his judgment had some basis in reality. Sometimes it would be very hard to do, because the person he chose did nothing. We had to figure out how to edit the show to make it work, to show the people he chose to fire as looking bad—even if they had done a great job.”

“He would say things like, ‘We had a million applicants and we chose this small group to be contestants on the show,’” Braun recalled. “And I would turn to my producer and say, ‘A million applicants? Really?’ And the producer would shake his head no. Trump would just take numbers and throw them around. I mean, from Season One to Season Two, he said his net worth tripled.  One day he said he had a billion dollars and then later it would become three billion; he just made stuff up.”

Trump’s propensity to exaggerate, to distort, and to outright lie about the most basic, obviously false things is now common knowledge. Donald Trump lies so much—almost 500 different lies over the past few months, as one analysis found—that his active denial of reality is the status quo now. (Just watch Trump’s version of reality versus actual footage of the event he’s describing.)

Watching The Apprentice, I was entertained by the contestants, the tasks, and yes, Donald Trump. But it also now seems clear that the show, and viewers like me, enabled and encouraged the worst in him.

The reality of watching Donald Trump

Over the past few months, a few readers have directly communicated that I should avoid political stories—and by that, they meant my coverage of The Apprentice, which I wrote about when Donald Trump’s behavior on that show became news as part of the election. My coverage ranged from an accusation that he’d sexually assaulted an Apprentice candidate to an unfair attempt to blame him for language in the show’s contract.

I understand the discomfort that comes from being confronted with facts that do not make one’s candidate look good—and it’s perhaps especially discomforting to come across that kind of information when reading about reality television.

So here’s a disclaimer: discomfort ahead.

I was hooked on The Apprentice from its first season, drawn in to its urban version on Survivor. From the tasks that challenged the contestants to the Boardroom and Trump’s final verdict, it was engrossing television.

In 2011, however, Donald Trump crossed a line: denying that Barack Obama was born in Hawaii, and even absurdly claiming that Obama “came out of nowhere” and was never seen at law school.

This was not Donald Trump expressing a political view I disagreed with. This was Trump denying factual reality, and doing so to challenge the legitimacy of a black president. And yes, the president’s race has everything to do with the birther movement, because it’s fueled by racism, as researchers have found.

Trump was encouraging racists—and encouraged by them, he became increasingly emboldened, even as he tried to pretend otherwise.

Yet I continued to watch and cover The Apprentice. Some readers commented publicly and privately that they’d given up, and wondered why I was still giving attention to Donald Trump and his show. It was a fair question.

Eventually, I wrote about this: How to watch and enjoy The Apprentice even though Donald Trump is an ass.

One of the reasons I gave was “all the good the show does in terms of raising money for charity.” The Celebrity Apprentice was not just about bolstering Donald Trump’s brand, but it was about giving—and Trump himself often showered charities with his own money.

Except: he did not. As we learned from exceptional reporting over the past few months, Trump never once paid what he promised. The money he said he’d pay personally came from either the production or his foundation—to which he has not contributed since The Celebrity Apprentice debuted. In other words, he took credit for giving away other people’s money.

But my primary argument was that “The Apprentice has always held Donald Trump up as a hypocritical, ridiculous reality show cast member who has more ego than self-awareness.” So, the show was mocking him, and so could we, no harm done.

On Sunday’s Last Week Tonight, John Oliver said that Trump has “unleashed a river of racism and misogyny.” Trump certainly didn’t create either, but by being so publicly and unashamedly racist and misogynistic, he gave others permission to be that way more publicly than before.

His candidacy has fueled incredible hatred. Saturday, at a rally in Tampa, a mother and her children protesting were escorted out, and Trump’s supporters kicked her son’s wheelchair (he has cerebral palsy). Another supporter wore a t-shirt that advocating lynching journalists—never mind how much relentless harassment journalists who cover Trump’s rallies have been subjected to. There’s also a “surge of Trump-fueled anti-Semitism.” There are endless examples.

The river is flowing, and it is horrifying.

And to watch The Apprentice in its later years was to see the dam leaking.

It’s one thing to watch the irrational decisions, the desperate need for validation, the dismissal of his own responsibility—I really had no choice—and laugh.

But it was another to see things such as his objectification of women and denial of facts, and moments like the above, and keep watching because the rest was entertaining. To observe his vile treatment of Rosie O’Donnell, which went beyond criticism to personal insults based on her body and sex.

What created Trump and allowed his rise is complex, and more than I fully understand. But I now deeply regret watching The Apprentice while looking the other way at behavior like his sexism and racist pandering.

Too many people, I fear, are doing that now.

I know that tomorrow, or during the past few weeks, many people will vote for Donald Trump because he has an R next to his name. Others will vote for him because they cannot stand Hillary Clinton, both because of her own mistakes and because of the ire she earns for being ambitious and transgressing expectations about a woman’s role in our society.

My objection to Trump—and my horror over his rise over the past year—has nothing to do with policy or with political party. It has to do with human decency.

Eight years ago, when a woman at a town hall told John McCain that Barack Obama is “an Arab. He’s not—” she was interrupted by McCain, who said, “No, ma’am. He’s a decent family man [and] citizen that I just happen to have disagreements with on fundamental issues and that’s what this campaign’s all about.”

That’s what a campaign should be about: disagreements, often passionate, even angry. That’s democracy.

But from day one of his campaign, when Trump said of Mexican immigrants, “they’re rapists,” Trump has made his run for the presidency about hating other people, and encouraging hatred of others. He’s demonstrated that he feels entitled not just to unlimited power, but also to women’s bodies, to assault them and do whatever he likes.

That did not start with The Apprentice, but The Apprentice empowered Trump, and then Trump became liquid fuel poured on the embers of bigotry and misogyny.

I should have fired Trump’s version of The Apprentice from my DVR and recaps long ago. And I hope that, on Tuesday, the country will choose to do what I did not.