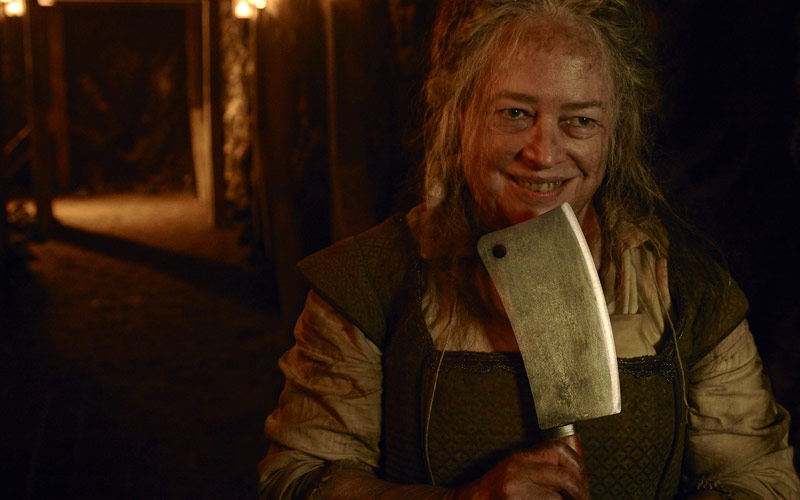 Referring to American Horror Story: Roanoke as a satire of reality television is generous, in the same way that it’s generous to refer to what AHS delivers each episode as “story.” The FX series less narrative and more spectacle, camp splattered with graphic violence. The most fun it offers is watching extraordinary actors—Kathy Bates, Angela Bassett, Jessica Lange, Zachary Quinto, et cetera—have fun playing the most extreme, absurd scenarios imaginable. Add jump scares and gross-out moments, and it has earned a decent following.

For its sixth season, creator Ryan Murphy and FX decided not to tell anyone the show’s theme beforehand, and instead unleashed a marketing campaign of 24 separate teasers created by the true artists in FX’s marketing department. Those were far more interesting than the actual show.

What season six turned out to be was an attempt, on some level, to take down reality television, with five episodes of a show-within-the-show called “My Roanoke Nightmare,” a true-crime reality series, and another four episodes of a sequel, “Return to Roanoke: Three Days in Hell.” Within them was an alleged true story of a couple being haunted and others being slaughtered, followed by the haunting and slaughtering of the actors who played them in reenactments.

Creating a show within a show had a dulling effect on the first half of the season, and not just because of its glacial pacing. It cut between real people narrating their experiences and recreations of those experiences. Acknowledged fiction within fiction means we’re being told twice that we’re watching actors, and it calls attention to the fact that the on-screen action is make believe.

Seeing Leslie Jordan’s intestines being pulled out of his body was gross, sure, but utterly inconsequential, because this was an actor playing an actor playing a fictional real person, Cricket. And the editing made sure we knew it, cutting back to Matt talking about seeing that in real life. Of course, “Matt” is an actor talking about a fictional life, so we know that the actual disemboweling we’re watching is not true on two separate levels.

Ryan Murphy, Brad Falchuk, and their team of writers were comically disconnected from even the type of show they were attempting to emulate/parody/use. There’s a glut of low-budget shows that retell the stories of true crimes or alleged hauntings, but no one actually seemed to watch any before writing this season. None of them resemble “My Roanoke Nightmare” in even the most basic of ways.

Characters making dumb decision after absurdly dumb decision—Let’s go wander in the woods! Then go back to the house where someone was just murdered! Then stay there with a child!—is perhaps forgivable because that’s to be expected from slasher horror.

But then American Horror Story tried to convince us that the reality show we’d been watching was the most-watched television show in 2015. The most-watched! That’s some ego to imagine this shlock would out-rate anything on ID or Oxygen, never mind The Walking Dead or The Voice.

Also, if we’re to believe the events being retold in the first five episodes were real, why in the hell would the people who lived through the bloodbath volunteer to return? There was more exposition than blood this season, but even their specious rationale required too much suspension of disbelief.

And if the producer, Sidney, was so convinced the original ghost story was phony that he planned to stage everything from ghostly rattles to the return of the pig-man actor, why return everyone to the house during the blood moon?

“Return to Roanoke” offered a glimmer of hope with its broken fourth wall, but the bloodbath overtook any attempt at using the tropes of locked-in-a-house-together reality TV or commenting on how real life is more interesting than staged reality.

Yet like other chapters of American Horror Story and basically everything Ryan Murphy creates, there was something interesting that occasionally emerged from the detritus, which here attempted a critique of this kind of nonfiction storytelling.

In one of the “Return to Roanoke” episodes, Lee tells the actor who portrayed her, Monet (played in real life by Angela Bassett), that the public only knows the fictionalized version of her. There’s something to explore there, but Murphy and company behaved exactly like their caricature of a reality TV producer, handing over their cast be tortured and eaten instead of letting them be real for a moment.