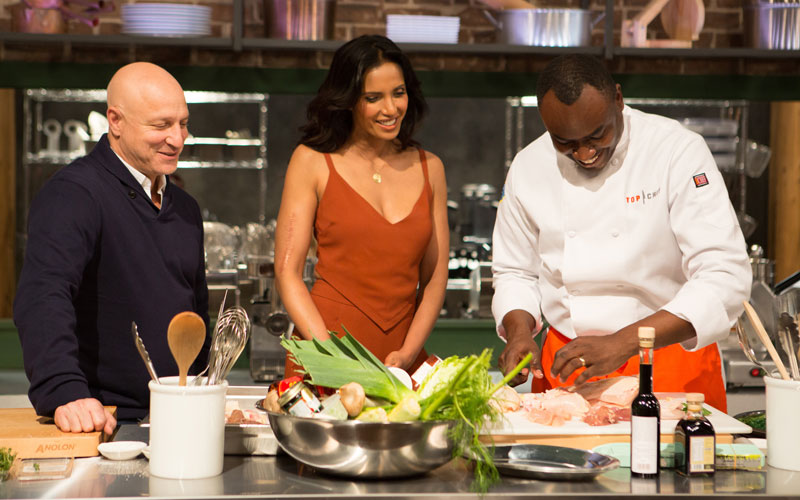 First Top Chef added its own version of Survivor‘s Redemption Island, and now, five years later, the show is borrowing another Survivor format: fans versus favorites, or returnees versus newbies.

The new season, which will debut Dec. 1, has also added former MasterChef judge Graham Elliot to the panel, joining host Padma Lakshmi, Tom Colicchio, and Gail Simmons. (That means Richard Blais, who’s been a judge the past two seasons, is out.)

I have learned that one returnee is season two runner-up and fan favorite Sam Talbot. All the returnees will be revealed on Facebook and Instagram over the next week, starting with clues such as this one.

Bravo announced the “rookie chefs” today, though its press release also acknowledged that the new cheftestants are “eight acclaimed chefs from across the country”; they will face off against “eight chefs from seasons past, who have never won the prestigious title and are back for redemption.”

We can guess how well that’ll go: eight people used to the pressure of the competition versus eight people who’ve never experienced all of the craziness.

The new contestants are:

The new season was filmed early this summer in Charleston, and Bravo says that “[f]rom a shrimp and grits cook off to a biscuit blowout, the chefs dive deep into the roots of Lowcountry cuisine to prove to the judges, the world, and themselves that they have what it takes to conquer their competition.”