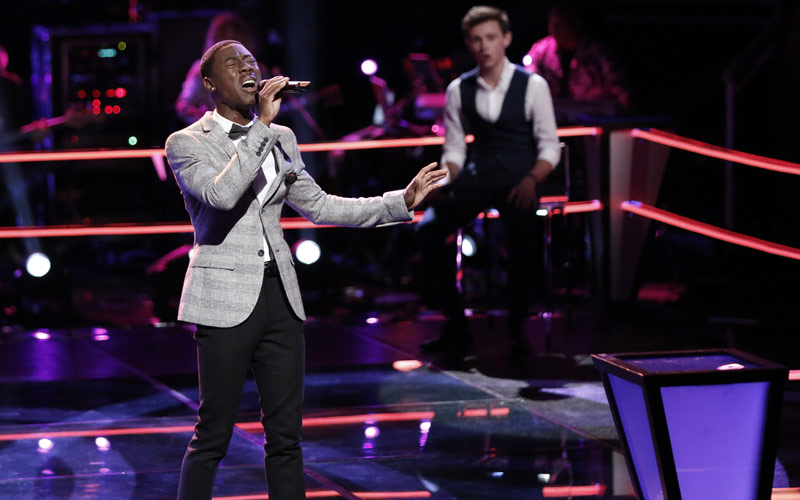 The Voice season 11 contestants Jason Warrior and Riley Elmore during the knockout round on Oct. 25, 2016. (Photo by Tyler Golden/NBC)

NBC’s The Voice will narrow its top 20 to the top 12 next week, but there’s a problem for television’s number-one show: it’s results show can’t air on Tuesday, because it’s election night, when all networks will have wall-to-wall coverage of another NBC reality show star’s fate.

So the show is borrowing from the short-lived 2014 ABC singing competition Rising Star and having live, real-time voting followed by eliminations in the same episode. This is a terrific idea.

The Nov. 7 episode, this season’s first live show, will have the franchise’s “first-ever real-time vote via The Voice Official App and Twitter,” according to NBC.

Eight of the final 12—two from each team—will be selected by viewer vote. The other four will be chosen/saved by the coaches: Miley Cyrus, Alicia Keys, Adam Levine, and Blake Shelton.

Viewers on the west coast won’t get to watch live, but they will be allowed to vote. NBC says the show’s Twitter, account, @NBCTheVoice, “will announce which artists are eligible.”

More things that are live!

To continue the Live! Really! Like right now! theme, the show will also use Facebook Live to broadcast from behind the scenes, with host Jeff Dye, who stars on NBC’s summer series Better Late Than Never and was on last summer’s I Can Do That.

“After the voting results and coach save from each team are revealed, the three remaining artists on each team will sit down with Dye immediately after they step off stage in the fun, newsdesk-style show. The Facebook Live show will serve as an extension of the real-time voting story on air with each artists’ real-time reaction to voting results—access that fans have never been given before.”

Both the live vote and the behind-the-scenes content are smart moves, I think.

Two years ago, after Rising Star concluded—having taken the attention and money that really should have gone to The Quest, but I digress—I wrote that its one great idea was live voting on an app. It really was interesting to watch how other viewers were thinking at the moment. I wrote, “I hope other shows borrow/steal that, because every real-time show from Big Brother to American Idol would benefit from the interactivity and thrill of impacting a show in real time.”

Incredibly, no show has. And The Voice doesn’t seem to be going that far; we won’t see the vote results displayed in real time as we did on Rising Star. Still, it’s a solid step forward. And maybe a step toward eliminating fluff-filled results shows?