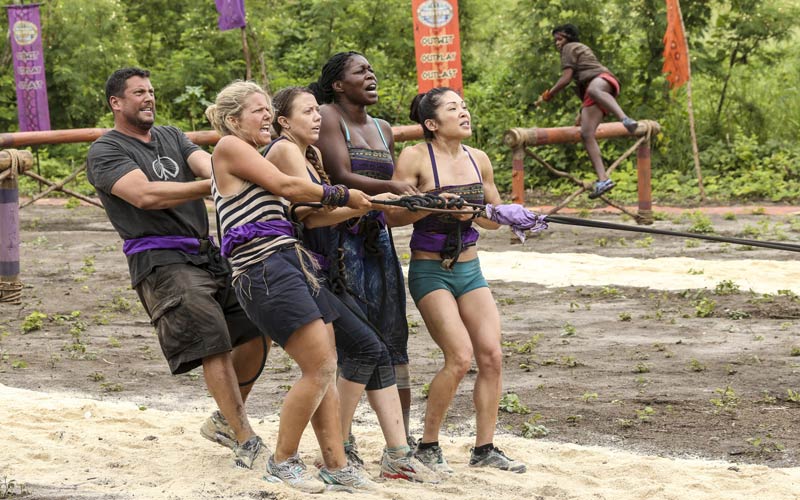 Sometimes the editing on Survivor is more obvious than a hidden immunity idol, and about as subtle as the wave that nearly knocked Jeff Probst off his feet as he announced the winner of this season’s first reward challenge. Episode four, “Who’s the Sucker at the Table?”, was one of those episodes.

Most of the focus, again, was on the Gen X tribe, probably because they’re older and have less time to live and if they don’t make it to the end of the season, they’ll at least have this.

It spent practically no time with the millennials tribe, except to show Adam’s idol discovery and Hannah’s subtle game play. Adam’s discovery of the idol was a wonderful moment, in that it broke the fourth wall and connected him with life outside the game. He broke down as he remembered his mother, who has stage four lung cancer. “To have my biggest dreams coming true at the same time my worst nightmare is happening—it doesn’t feel real,” he said. He called his mother a Survivor superfan and added, “she’s the ultimate reason for being here.”

The millennials lost the reward challenge—and yay, reward challenge, which took place on a stunning sand bar in the middle of the ocean—though they won the immunity challenge. Immunity involved a fun contraption that required the entire tribe to lift one of their members. Gen X curiously chose to have Chris as their first person on Survivor’s version of a dumbwaiter—perhaps their biggest, heaviest guy. He was a great choice for the reward challenge, battling puny millennials in the water, but for this? Not so much.

Meanwhile, the millennials solved their puzzle by staring at it. At least, that was the suggestion of the editing and the Baby Boomer who was standing behind them shouting like they’d parked on his lawn.

The mystery of an idol played

On the Gen X tribe, the departure of Paul gave way to the introduction of an apparently new tribe member, Lucy, who filled the power vacuum. Her power grab was both bad game play and dripping with sexism. She repeatedly insisted, as she said at Tribal, that she was just speaking to men like they must be spoken to: “Most of the time when I speak to men, I think you can handle bluntness, and a lot of them tell me they appreciate it,” she said.

Lucy clearly appreciates masculinity, and the lack of it prompts her sexist scorn: “Ken’s so emotional like a girl,” she said. I’m so used to gross sexism and misogyny on Survivor but it was still disorienting to hear such direct sexism from a female cast member.

Her anger toward Ken came thanks to his plan to secretly oust her. Ken’s attempt to take down the person who claimed the power was a smart move, and I love how Ken and his terrified shadow David seemed to be secretly controlling the game from wherever it is that they’re always hanging out away from the rest of the tribe.

Earlier, they were threatened by Lucy. “I don’t wanna see you guys talking to anybody else. If I do, I’m gonna get upset,” she said, tossing a horse’s head onto the ground next to them.

But they ignored the warning and made the mistake of telling Jessica that she’d suddenly become Lucy’s target for her role in dumping Paul. “I am stunned,” ADA Jessica said. “I thought we all kind of came up with [the Paul plan] together, so it seems a little suspicious.”

What’s interesting is that:

Instead, Lucy and almost everyone else stuck with the original Jessica plan—including Ken! At Tribal Council, the entire tribe voted for Jessica except for CeCe and David. And just before the votes were read, David stood up and declared that he was going to disappoint people. (I honestly thought he was going to quit the game, he sounded so dejected.)

But then he saved Jessica. I’m all for a great blindside, but I just do not understand this at all. Why on earth would David use his idol to save Jessica, who’d essentially just indicated that she wasn’t to be trusted? Why not just let her go off to ponderosa? If Lucy was that much of a threat, and she was truly made at Ken or David, Lucy probably would have ordered a hit on one of them. Was he just that desperate for a blindside that he took the first opportunity?

Now David is idol-less and even more vulnerable. He would have made himself less of a target if he’d stolen a Survivor transpo department speedboat, found the nearest Target store, stolen its sign, and then worn it around the beach as a costume.

Lucky for him: a tribe swap is next week.