Television journalist and analyst Mark Halperin is standing in the shadows outside of the Ecuadorian embassy in London, followed by a camera crew from Showtime’s The Circus. Having interviewed someone with connections to Wikileaks founder Julian Assange who says Assange is obsessed with coverage of himself and is often the person posting to Wikileaks’ Twitter account, Halperin starts tweeting, trying to get Assange’s attention. Then he waits.

The show breaks the fourth wall to show Halperin’s small crew. Someone may have emerged from the building where the embassy is located. The music is subtle but tense and relentless as the shadowy figure approaches—the person is both literally in shadows and also blurred out from head to toe, giving the person the aura of a dark spirit. The person starts asking vague questions and giving evasive answers. There seems to be real danger, and then the person asks Halperin to step away from the camera crew.

Eventually, though, the shadow agrees to give a question to Julian Assange. A producer says, “”You want something he will answer.”  Halperin pulls out a small notebook and starts scribbling: “What aspect of the Podesta e-mails do you think the U.S media has underreported?”

That is the one question he wants to ask? With accusations that Assange is doing Russia’s bidding to help elect Trump or disrupt the election, that’s what he cares about? What Assange thinks about the choices being made by journalists such as Halperin himself?

I should have seen that question coming, though, because this is The Circus: Inside the Greatest Political Show on Earth, which, as its subtitle says, purports to pull back the curtains on politics. Instead, it ends up pulling back the curtain slightly on the media’s coverage of politics—and is vital, important, well-crafted television.

It’s hard to pin down just what The Circus is, as it’s changed almost week to week this fall, but having watched since the beginning, I can say this: It has become a valuable part of the campaign, and is essential viewing for its perspective on the media.

The series follows two Bloomberg reporters, Mark Halperin and John Heilemann, along with political strategist Mark McKinnon, as they follow—and cover, for Bloomberg TV—the presidential campaigns. It’s shot and edited in virtual real-time, with each Sunday’s episodes covering the preceding week, although events of the early part of the week have tended to get more weight and time, with news that breaks late in the week getting less attention. (The events in London appear to have been filmed Friday, however—remarkable turnaround for such a tightly edited scene.)

The show is not comprehensive nor thorough, but it is wide, a highly reel of the past week viewed from a little more distance, physically and narratively. Even footage you may have seen looks different here. There are more camera angles, and more perspective: of the crowds, of the candidates, and of the people who make up that amorphous, demonized “media.”

During the debates, The Circus cut from answers to Bill Clinton, Ivanka Trump, Don. Jr—reaction shots we never saw during the actual debates—and also to the room where hundreds of journalists gathered on location to watch on TV like the rest of us.

The Circus always seems to be there, at big events in the campaign, but it’s behind the scenes, following people down hallways, or lingering outside. Of course, The Circus’ footage is still filtered and carefully selected, too, because that’s what all media does.

Most shows begin with the three men—some diversity of perspective would be welcome for future seasons—discussing the week, usually over a meal, and giving it a theme. It’s here that we watch not only television journalists shaping their narrative, but identifying the focus of the episode itself. We’re told, essentially, the angle from which the show will approach that week’s news from the campaign—which is more than what most media outlets do.

This process of watching the news be made, essentially, could be dull, but the people behind the scenes of The Circus (it’s produced by Left/Right) take care with their craft, and elevate political TV coverage with more thought and care than the real-time TV news networks can. There are slow-motion establishing shots that really pull us into the scene; there is thoughtful editing that connects each act.

Earlier this year, Showtime president David Nevins told Variety, “I was skeptical that we would end up getting access and being sufficiently differentiated from all the different ways news divisions are covering the elections,” but added that the show “delivered on both fronts.”

He’s right. The Circus did have more access during the primaries, though notably not with Hillary Clinton herself. Bernie Sanders and Donald Trump were virtually regular cast members, and at that point, the show edged closer to being a behind-the-scenes documentary about primary campaigns, even if it was mostly time negotiated with the campaign or a question shouted at a candidate over a rope line. The Circus’ stars spent time walking with Trump around Mar-a-Lago, and lounging with Bernie Sanders backstage.

With 13 candidates who were competing when the show began in early January, The Circus had a lot of material to work with to craft its half-hour episode about the preceding week. As candidates fell away, the access thinned. In its place came access to the media, such as an episode that spent a lot of time behind the scenes at FOX News, including with Megyn Kelly.

Interviews can to be quick and fleeting, as people pass by in the spin room and regurgitate their non-answer answers. But they can still be valuable. Watch this moment with Donald Trump, Jr. after the third debate, and when Rev. Jesse Jackson happens to walk by, prompting Halperin to initiate a brief conversation that perhaps otherwise wouldn’t have taken place. It’s a striking moment, especially as Don Jr. dismissively says “we’ll see” as he walks away.

The Circus does have time to go deep when it can. Last night’s episode included John Heilemann’s candid conversation/interview with Roger Stone, the man with connections to both Donald Trump and Wikileaks, and who has defended Assange as “not a Russian agent,” over caviar.

Though all of this focus on the media is revealing, there’s surprisingly little self-reflection about the role reporters and journalists are playing. It’s the undercurrent that’s steering the ship from the first frame to the credits, yes, but I’d like to see more explicit, meta-level conversation: about what Halperin and Hellemann are doing on their Bloomberg show, and even how they’re making decision about what to follow on The Circus itself.

The show may then risk eating its own tail, but it’s worth it because of how important that conversation is. Just look at what a recent report from the Harvard Kennedy School’s Shorenstein Center on Media, Politics and Public Policy found:

“The result is that the press’s version of a presidential campaign is a refracted one, shaped as much by news values as by political factors. It’s a version that can help, or hurt, a presidential hopeful’s chances of winning the party’s nomination.

The tendency of journalists to construct their candidate narratives around the status of the horse race also affects the candidates’ images. Every candidate has strengths and weaknesses but the ones that come to the forefront in news coverage are the ones that fit reporters’ race-driven storylines. A candidate who is doing well can normally be expected to be wrapped in a favorable image—his or her positive attributes will be thrust into public view. A candidate who is doing less well has his or her weakest features put before the public. It is as if the runners in a 100-meter dash were stopped after 20 meters, with those in the lead placed at the 25 meter mark while those in the back placed at the 15 meter mark before the restart.”

That’s the kind of nuance missing from shouted and tweeted accusations of “bias,” but it’s the kind of conversation The Circus could fuel—even in non-presidential years, and I hope that the show continues long after this campaign is over.

There is not some grand conspiracy to support candidates based on ideology, but for all the good work the media does, for all the abuse its hard-working members endure (especially this year, when the press has become targets for abuse), the media does make decisions about what to cover and how to cover it. And that should be critically examined as much as possible. 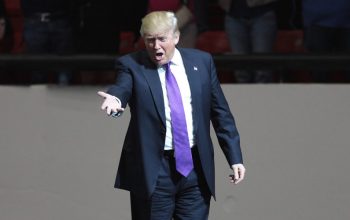 In an episode that aired in February, after the Iowa caucus, Trump railed against “the media—the worst people ever,” a refrain that has continued and amplified ever since then, contributing to hate-fueled harassment and more. (Of course, Trump has continued to seek media attention, including granting The Circus access.)

Trump was at a rally and said to the crowd, “We finished #2, the headlines were Trump comes in second; he’s humiliated. If the headline is, Winner of the night, Marco Rubio. How come the person that comes in third, on many of the networks, is being covered like it’s one of the great victories in the history of politics in this country?”

With that decent question, Trump unwittingly revealed the theme at the heart of The Circus—how the media’s narrative is shaped, and also how it the work the media does is twisted beyond recognition by politicians and partisans and former stars of The Celebrity Apprentice.

That’s why we need The Circus: to continue to explore, to show, and to humanize the process.