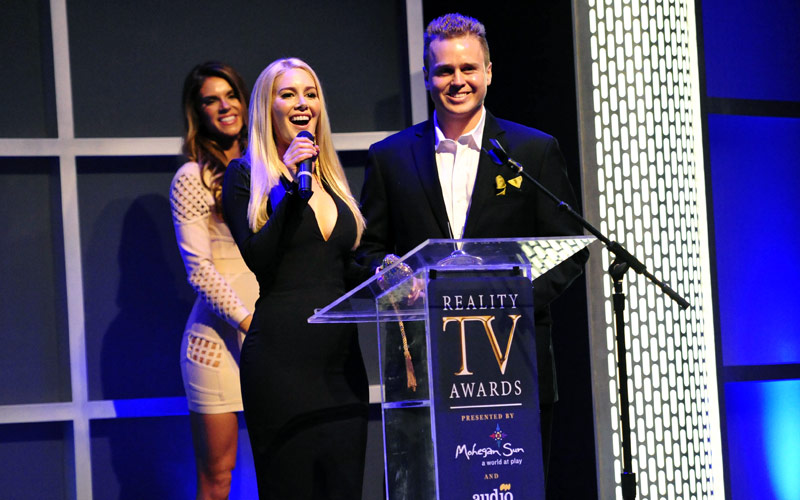 While the Emmys offered some welcome surprises this year with their acknowledgement of reality television shows, the breadth of the genre remains underserved by awards. The range of shows and the behind-the-scenes talent isn’t recognized the same way it is in the scripted world.

Enter The Reality TV Awards, whose mission statement says “supports, examines and redefines the art of reality in media by rewarding excellence, encouraging experimentation and recognizing that the public is the heart of our industry. We embrace the spirit of fun and camaraderie which is an inherent part of what makes this industry great. We value the rich diversity of programming that puts reality in media on the leading edge of entertainment.”

That’s a noble goal, but last year’s ceremony—which gave the first-ever hall of fame award to Heidi Montag and Spencer Pratt, of all people—was excoriated in these pages by a veteran producer, who wrote that the Reality TV Awards were “an embarrassment and an insult to reality television. We deserve better than a booze-fueled frat party.”

So what are the awards, exactly? How do they work? Who chooses nominees and winners? Who is behind them, and what do they think of that criticism?

I talked to the awards’ creators and producers, Kristen Moss and Andrew Ward, who are both work in reality TV: Kristen cast MasterChef seasons seven and eight, MasterChef Junior season five, and supervised casting for The Great Christmas Light Fight, while Andrew started as a contestant on I Survived a Japanese Game Show‘s first season, and has since worked in different aspects of production on shows such as MasterChef,  America’s Got Talent, and Celebrity Apprentice.

Why the Reality TV Awards exist

When Andrew moved to Los Angeles, he “realized there was no networking group out here and no award show. We wanted to recognize people behind the camera and in front of the camera for all their accomplishments.”

They founded, in 2012, a group called We Work in Reality TV, a networking group that Kristen says now has more than 3,000 members who work in various aspects of unscripted production.

Conversations with the site RealityWanted.com, which sponsored an event for the group, revealed that both organizations were planning to host reality TV award shows, so they decided to work together. That led to the first awards in 2013, though the partnership later ended. “They helped us put on the event for a couple years until we took over,” Andrew said.

The Reality TV Awards are now in their fourth year. “What we’re looking to do is get recognition to the industry,” Kristen said. “Reality TV does not get recognized. I get that there’s still a stigma about it and people have their ideas and opinions on reality television, but at the end of the day, people like us are making our living in this industry. So we want to get that recognition, we want the fans to really notice and recognize all the different aspects of reality TV.”

“We don’t want to poke fun at the industry,” she added. “We want to award, reward the industry for everything it does entertainment-wise, to keep America involved and invested in these shows.”

How shows and cast are nominated

While categories are selected by the board of governors for the awards, nominations come from production companies and networks.

The only rule: at least 50 percent of a season’s episodes had to air last year. Production companies can nominate themselves, but individual cast members cannot.

After those nominations are collected, Andrew said, “our academy voting narrows it down for that public vote.” That can be a daunting task, because, as he noted, “there might be a category that has 35 or 45 or 55 shows in it.”

Kristen said, “every single submission will go into the industry vote.” That’s done with a password-protected, individual ballot sent to each member of We Work in Reality TV.

Once nominees are chosen, typically about eight or nine in each category, they’re notified to help “get the word out” about the vote, she said.

Why the public votes

After the nominees are selected, voting is then opened to the public. Voting requires entering an e-mail address.

As of last Tuesday, there were about one million votes cast so far; voting has been extended to Friday, Oct. 14.

With all of the work that’s done to have nominees selected by those who understand the genre, why open it to an unscientific, easily manipulated online poll? People can vote multiple times, it’s easy to game the system, and online polls don’t measure a representative group.

“We totally understand that,” Kristen said. “We understand that those things can happen. We’re kind of taking the trust into people who are voting. Who knows what is going on behind the scenes.”

When I asked about the possibility that someone could automate voting to manipulate the results, Andrew told me that “our system takes into account IP” addresses and “no one so far yet” has tried to game the system—”unless they’re scrambing the IPs,” he said, in which case they wouldn’t know.

Kristen added, “up until this point, it hasn’t been broken. The people who have fun I feel like have deserved to win; nobody’s ever complained to us saying, Wait a minute: How could this person could have won? That is so clearly not the winner!”

Of course, having public, fan-driven, vote-as-many-times-as-you-can voting is valuable marketing for the Reality TV Awards. “We’ve implemented the process that we’ve had to implement to get recognition to get the name out there for the industry,” Kristen said, “and it’s been working, so it’s hard for us to say that we’re going to change that right now. We don’t feel like it’s a broken process.”

However, she added, “as people come to us with ideas and new ways of improving, we are 100 percent open to that.”

“At the end of the day, we are gaining momentum and popularity within the industry. That process may change. We may implement new processes as we grow. What we need to do is focus on building the show, getting bigger names out to the show, getting every single show to submit to us. We have a very small team that puts this whole thing together and it’s a huge undertaking.”

What happens at the ceremony

Winners are not told who won in advance, and all nominees and their associated production companies and networks are invited to a ceremony, which is being held Nov. 2 this year.

“We definitely do our best to get as many of the nominees and the casts for the nominated shows to the awards,” Kristen said. Presenters and nominees walk a red carpet and get VIP seating, while everyone else pays for admission.

Tickets are available to the public, starting at $50. “The majority of our money comes in through ticket sales and sponsorships. The only way we’re able to keep this going is if we do generate somewhat of an income off our ticket sales,” Kristen said.

In his essay here, Troy DeVolld called last year’s ceremony “a show being half-assedly staged in a club with a sprinkling of references to how much booze was being consumed.”

Andrew told me that last year’s host, Jonathan Bennett, was “making jokes during the show, but the host himself wasn’t even drinking. Yeah, he kind of poked fun that we were having fun.”

Kristen said, “We want the sponsors to see us and notice that’s worthy of having their logos and brands on, because it’s not that drunken event, it is a prestigious thing that happens in the industry.”

“But these people are cast on reality shows for a reason,” she added. “They have personalities; they’re loud and outspoken. It doesn’t mean that they’re falling over and that they’re drunk; it means that they’re having a good time and they’re going to speak their minds. It is a really fun event to be at. But I didn’t see one person who was over their limit; everyone was very put together.”

During the 2015 awards, Kristen said, “a lot of people were mixing and mingling and up by those bars that were right in that VIP, lower-level section. Everyone’s really social. You don’t work in reality television if you’re not a social person—excited about meeting people, striking up conversations with whoever. On screen or behind the scenes, that’s just how people are in the industry. So you go into an event where you know a majority of the people, and there’s going to be a lot of chatter. So I think those two bars being open was one of our downfalls, when it comes to people sitting and paying attention and watching the show happen. That’s going to be changing this year.” Those two bars will close, but the lobby bar will remain open.”

“We’re hoping that helps with people paying attention and cheering for each other and really being able to celebrate the industry,” she added.

Among the other changes this year, besides a gifting suite, is the addition of a new seating company that will help improve the show’s flow, Andrew and Kristen said. And the awards will continue to evolve.

“As we grow and as we build,” Kristen said, “we get more and more people involved, which is amazing.”