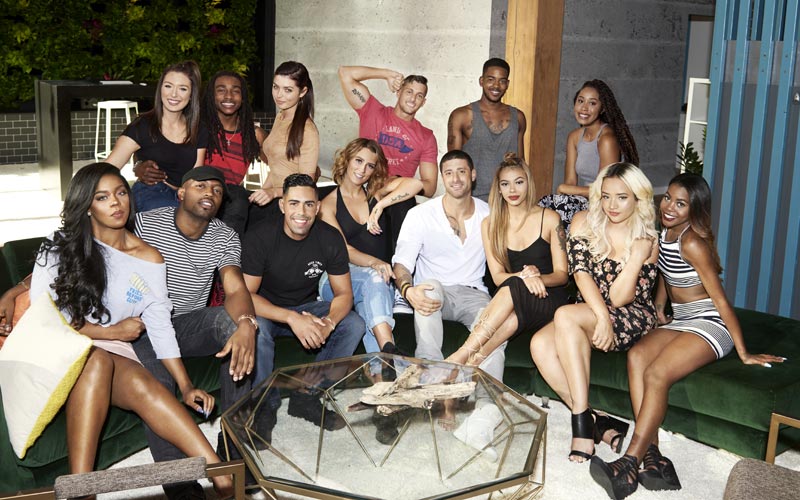 The Real World Seattle: Bad Blood cast members, the original seven and the people producers brought in to confront them. (Photo by MTV)

“On all reality shows, you take their phone away,” the executive producer of The Runner, Craig Piligian, told me this summer. “We fucking gave them phones.”

Another show that filmed this summer, The Real World, is doing the same thing, and it’s a first for the franchise: The cast members of The Real World Seattle: Bad Blood will all have cell phones so they can make calls and text.

The new season debuts tonight (MTV, 10 p.m.), and has already broken ground with another first for the long-running series: it’s the first time a cast member on another reality show was cast on The Real World. (It’s Are You The One’s Mike Crescenzo.)

While cast members will have phones, the MTV show is basically just updating what it’s done since season one: providing a phone that had its calls recorded. The smartphones “limited cast members’ access to social media,” Rob Owen reports, and “won’t have access to social media, and texts and calls will be recorded and monitored so they can be incorporated into the show.

Executive producer Jim Johnston told Owen, “Normally, we had just one phone line in the house they all had to share and that allowed us to video record all phone conversations, but it wasn’t true to how young people are today. Nobody has a [traditional] phone line anymore.”

Update: Someone reminds me that, in 2001, The Real World: Back to New York cast was given two-way communication devices.

Johnston also justified this season’s lets-force-some-drama twist, which will bring people who have “Bad Blood” into the house with the cast, by making the most paternalistic argument possible: “It’s really a way to make the roommates think more about their lives and where they’re going from here. These people are generally 21 years of age, and they’re all at that point in their lives where they’re struggling to become an adult. We wanted to challenge them with people from their past.”

I look forward to the season of The Real World when its producers—struggling to make a show that millennials will watch now that they’ve alienated its original fans—are challenged by the people they’ve emotionally manipulated while attempting to squeeze out an extra ratings point and keep their show alive.

That said, I will give them credit for the reveal: having production staff unscrew and remove a wall to show the cast that there’s more house and more drama.