Reality TV producer Mark Burnett is under pressure to release previously unaired footage of Republican presidential nominee Donald Trump on The Apprentice, following the release of audio on which Trump said his fame allowed him to commit sexual assault and grab women’s genitalia.

A producer on seasons one and two of NBC’s The Apprentice says that “there are far worse” tapes of Trump in existence than Trump’s casual conversation with Billy Bush. And another producer who once worked for Mark Burnett says that refers specifically to Trump’s use of the n-word.

Well-respected reality TV producer Bill Pruitt—who also worked on The Amazing Race and was showrunner for Deadliest Catch, Swamp People, and Amazon’s Eat the World—tweeted about “far worse” comments. Chris Nee, who worked on the short-lived Burnett reality TV show The Casino, tweeted that producers and crew from The Apprentice told her that Trump used the n-word.

All of this began Friday, when the presidential campaign was upended again by the release of unaired audio from a 2005 Access Hollywood appearance, on which Donald Trump referred to Access Hollywood co-host Nancy O’Dell, and said, in part,

“I did try and fuck her. She was married. … I moved on her like a bitch, but I couldn’t get there. And she was married. … Then all of a sudden I see her, she’s now got the big phony tits and everything. She’s totally changed her look. … You know I’m automatically attracted to beautiful—I just start kissing them. It’s like a magnet. Just kiss. I don’t even wait. And when you’re a star, they let you do it. You can do anything. Grab them by the pussy. You can do anything.”

The audio was first revealed by The Washington Post—though the tape was discovered by Access Hollywood, which decided to look into its archives after The Associated Press cited 20+ Apprentice cast and crew who said Trump repeatedly made demeaning comments about women. Access Hollywood, which is owned by NBC, was planning to wait until next week to release the audio, which was being vetted by lawyers and others internally when someone leaked it to the Post. 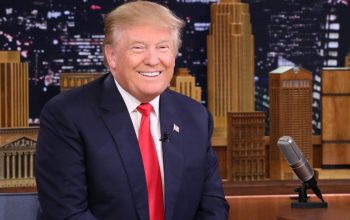 Because the AP’s story said Trump regularly made lewd and sexist comments even while cameras rolled, news organizations have been seeking footage and/or comment from Mark Burnett. But so far, Burnett has remained silent, refusing to even respond to reporters’ requests.

Even NBC doesn’t seem to have the ability to release the footage. An NBC spokesperson told Politico, “We don’t own the footage. We’re pursuing it along with every other news organization reporting on this story.” Does not owning it also mean it’s not in their possession? NBC spokesperson Rebecca Marks told BuzzFeed she didn’t know if they had Apprentice tapes and even if NBC did, “We don’t have the legal right to give out the footage from that show.”

All Your Screens’ Rick Ellis runs down the reasons why Apprentice footage may never be released. He cites an NBC executive and “two sources familiar with aspects of the show’s production,” who said that “raw footage from The Apprentice can’t be made public without the permission of Donald Trump” because of the business relationship between Burnett and Trump, which remains unclear. But “Trump’s organization did retain some sort of approval rights on decisions such as licensing, casting and control of the unreleased footage and other work product related to the production of the show.”

Ellis and others are also citing Mark Burnett’s contact with crew members, which has a $5 million penalty for leaking information. However, Survivor cast member Russell Hantz leaked the results of two seasons and, as far as we know, never enforced that $5 million penalty.

All Burnett did then was play dumb, even though his company sued to find out the identity of the person leaking information. That would be a strategy he could use now if someone leaked unaired Apprentice footage. But considering that Burnett was incredibly defensive about Trump at the Emmys, and is being silent now, it seems unlikely he’ll be the one to act. Maybe someone else will.