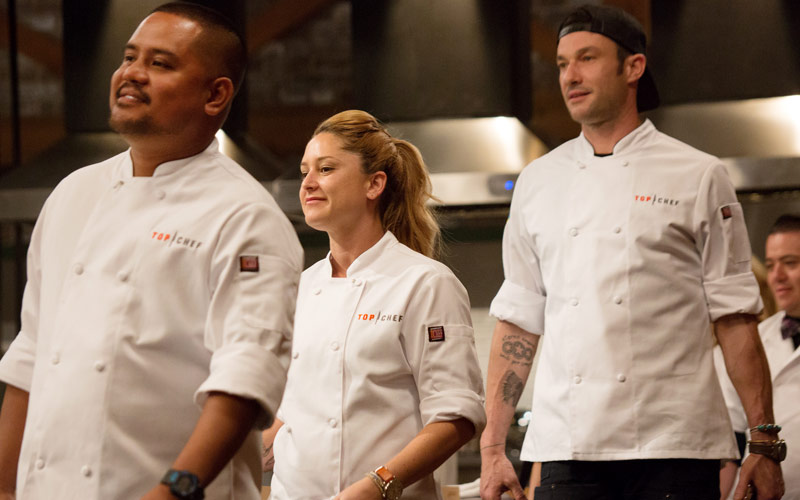 After teasing them for a week, Bravo announced the identities of the Top Chef Charleston returnees today. Seven of the eight chefs have been on the show once, and one chef appeared on a regular season and on Top Chef All-Stars.

The eight chefs are mostly from recent seasons, and are very season-10 heavy, with three coming from Top Chef Seattle alone.

Bravo previously announced the eight new contestants, who are undoubtedly going to be destroyed in the competition by the returnees, because that’s how these things go. The press release called this “the ultimate challenge of old blood versus new.”

The old blood, aka the returning chefs, plus their original seasons and their current locations are:

Behind the scenes, 30 miles from Charleston

The show filmed in Charleston at the beginning of the summer, starting in May, but was not headquartered in the city. Instead, it used a former firetruck manufacturing facility as its soundstage that is actually 30 miles from downtown Charleston.

Of course, the show will undoubtedly use locations, including restaurants, that are actually in the city. And it’s likely challenging to find a large, empty, soundstage-like space in the actual city. The same thing happened for Top Chef Boston, which was not headquartered in Boston.

While there’s no footage of the show being filmed in this segment from NBC’s Charleston affiliate, there is a really fascinating look at the behind-the-scenes area—which is full of kitchen supplies, pots and pans, production equipment, and more.

It’s a quick glimpse but worth checking out: