Skip to Content
Ken McNickle and CeCe Taylor help their Gen X tribe with its first challenge on Survivor. (Photo by Robert Voets/CBS)

So much of what I’ve learned about millennials on Survivor Millennials vs. Gen X has come from Mari Takahashi, who was voted out at the end of episode two. Last week she explained that “no one has just a regular job,” and this week she told us that TV is unique to their generation: “As millennials, we grew up with a television screen.” 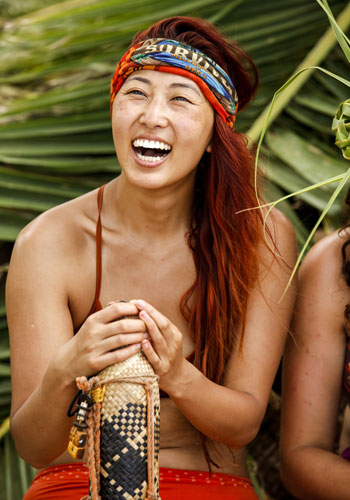 In other words, what she did was affirm that millennials imagine themselves as special snowflakes for whom everything is new—television, a varied career path, electricity—despite the fact that those snowflakes are actually just part of a giant pile of dirty, slushy, day-old snow.

I will miss Mari for those fun moments, but also because she was one of the few on her tribe willing to challenge the status quo—the status quo being a foursome with a power throuple at its center, and at the center of that, a couple willing to Netflix and chill on Survivor.

Yes, Figgy and Tails hooked up, and we got to hear every sloppy kiss/sound effect. The editors were not kind to Figgy’s choice; as everyone’s bro Taylor guzzled coconut water, and barked out, “It’s like taking shots before a game of hockey,” they cut to Figgy saying, admiringly, “I get to cuddle up with that.”

The make-out session was surprising for several reasons. As Michaela put it, “you stink, you mouth is nasty, you got sand in your drawers, and you kissing somebody. That’s disgusting.” She called them out immediately the next morning: “I heard y’all kissing.”

Jay offered an assessment of their make-out session that still confuses me: “My dude kissed her already.”

But in private, Jay was less celebratory. “Figgy and Taylor are freaking stupid, man,” he said, and then showed his ignorance of Survivor history: “no couple ever lasts on Survivor, ever.” He was right, however, that this obvious, open behavior made them a target.

But then we got a more nuanced, horrifyingly sexist assessment: “Taylor’s my boy, I love that kid. Sometimes women blind you and then you end up stuck with a woman and you’re bailing on your boys when it’s bowling night, and you’re stuck at home with your girlfriend. Wake up.”

I think the only person needing a wake-up call here is Jay, because he seems to be blaming Figgy for taking his love away from him. Perhaps I just don’t understand the millennial language because I didn’t grow up with television?

At precisely the exact moment when I could not handle any more Jay, he pulled Figgy and Michaela aside for a fascinating peace summit in order to get them to vote together by saying they were first and second on Zeke’s hit list. That seemed to work, at least according to the edit.

The millennials’ first visit to Tribal Council left several of them in awe of being on Survivor, and that appreciation of what they get to experience was certainly charming. Jeff Probst was so charmed he kind of let them off the hook—especially as Michelle whispered and tried to convince Hannah to vote for Mari. Mari wanted a reason; Michelle said she’d tell Mari later.

Hannah was so conflicted she whispered for a long time in the voting confessional, and Probst ended up peeking around the corner to check on her, a wonderful moment caught by the confessional cam—and by this awesome GIF-maker:

The only people on the tribe to not vote for Figgy were Zeke, Adam, and Mari, leaving Zeke and Adam at the bottom of the tribe of bros and hook-ups.

It’s worth noting and thinking about how, once again, a woman of color was the first voted out of her tribe. Mari’s blindside makes logical sense because, yes, she was strategizing against the couples. But so was a white male, Zeke, and he didn’t appear to ever be a target. (That’s even more incredible when you think about how Jay’s argument to Figgy and Michaela was that Zeke was targeting them, so they should vote for Mari.)

At the Gen X tribe, Paul was established as the leader of the tribe, by both himself and by others, though not everyone was thrilled with this. David and Ken bonded over their outsider status despite their physical differences, and David showed Ken the hidden immunity idol he found. (The idol was inside an obviously marked coconut, perhaps because the idol vending machine was destroyed in the cyclone.)

They plotted against Paul, and pulled CeCe in to their alliance. “I don’t want to give Paul too much time to come in and try to counter,” Ken said.

Paul affirmed his control of the tribe at the start of a brutally edited sequence—brutal because of its juxtaposition of different moments. Moments before Paul couldn’t actually breathe, he said,  “I breathe control.”

Cut to CeCe telling Ken it was time to “cut off the head” of the alliance. Cut back—and I do not think we have any real evidence these things were happening at the same time—to Paul refusing water, and then collapsing with numb hands.

The fourth wall was quickly broken as producer Drina Maruna told the cast to move back (“we’re gonna come in now”), and by we, she meant producers and then Dr. Joe, and then Jeff Probst, M.D.

As it turned out, Paul was suffering from heat exhaustion and/or dehydration alone. The “he might have had a heart attack” line from last week’s preview was actually part of a longer sentence, one Dr. Joe spoke not to his patient, but to his medical intern, Probst: “It would warn us if there’s signs that he might have had a heart attack.” There’s the power of editing; a few words chopped off and it’s a completely different thing. (However, Probst told EW that Paul himself thought he’d had a heart attack, so that was the assumption of the producers and the medical staff at first.)

Before Probst left, he declared, “the game is back on!” just so everyone was clear. And speaking of clear:

A challenge in the middle of the ocean, literally

That challenge location: wow! The opening establishing shot of the challenge build in the middle of the ocean, bright blue, transparent water—16 years later, Survivor still does this better than any other show.

It was a strong challenge, too, involving everyone, and with three stages that required several types of skills. Despite Gen X’s inability to work together at camp, and despite David’s apparent inability to swim, they won.

If there was any doubt about Paul’s health, he dispelled it by leaping into the water to claim the immunity idol from Jeff Probst, declaring, “Dr. Joe brought this old pirate back from the dead, baby!”