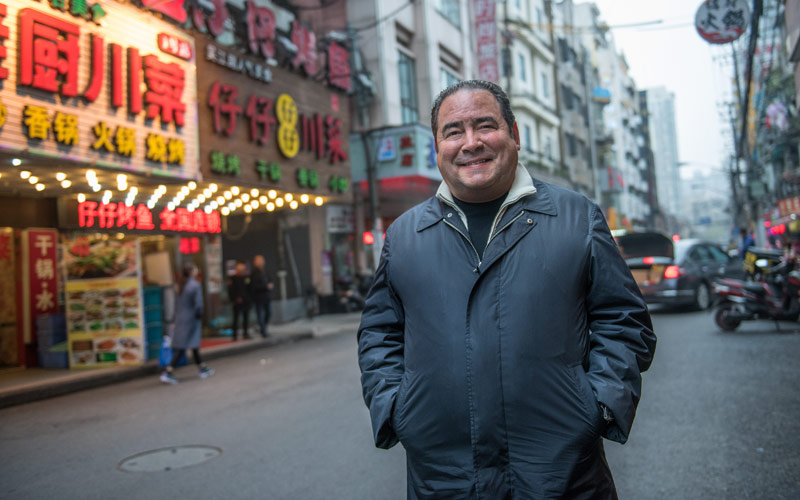 Chef’s Table offers exceptional filmmaking and wonderful storytelling, bringing human beings back into food television. But as I wrote in my review, it’s not binge-worthy, gripping entertainment. It’s art to be savored and appreciated, like the piece of precious dinnerware kept on a top shelf, attractive rather than functional.

Emeril’s new series is the plate you use every day: familiar, comfortable, and accessible. Yes, the series is well-crafted, with majestic establishing shots of cities and countrysides, clean edits and transitions between acts, and entrancing slow-motion footage of food being prepared. It looks great.

But Eat the World, which is produced by Ugly Brother Studios, offers a clear sense of the life and vitality surrounding food that Chef’s Table doesn’t quite capture.

We’re in kitchens and markets and places that themselves aren’t flawlessly composed, and watching people who are not always perfect with their cooking, even though they’re highly skilled and masters of their craft. Food and life are messy and raw, and so is this series.

In each of the six half-hour episodes, Emeril is guided by a friend and well-known (mostly) chef, including Marcus Samuelsson in Sweden, José Andrés in Spain, Nancy Silverton in Italy, and judge Aarón Sánchez in Cuba. Emeril is learning—and mostly not in that pretending-for-camera learning that is so common on food TV—and so are we. He’s a guy who knows his stuff but is also eager to learn more.

Each episode has its own flavor. For example, episode one is somewhat of a tour through Sweden and its culinary scene, while episode two, The Shanghai Soup Dumpling, focuses on a single dish. But all episodes basically follow the pattern of Emeril learning and then doing.

All of this is well-paced: deliberate without dragging, and pausing in the right moments. There’s a lot of savoring—of food, and of the moment.

What surprised me the most was the humor and emotional depth that arrived in most episodes, raw human experience that is deeply felt on each side of the camera.

These are small moments but they’re perfectly human ones, such as Nancy Silverton getting mozzarella all over her face.

After The New Yorker Presents, a series that mirrors the magazine, Eat the World is the second original reality series for Amazon, and third unscripted series overall, as The Fashion Fund moved to Amazon for its second season.

But it’s the first to really tap into something universally human.