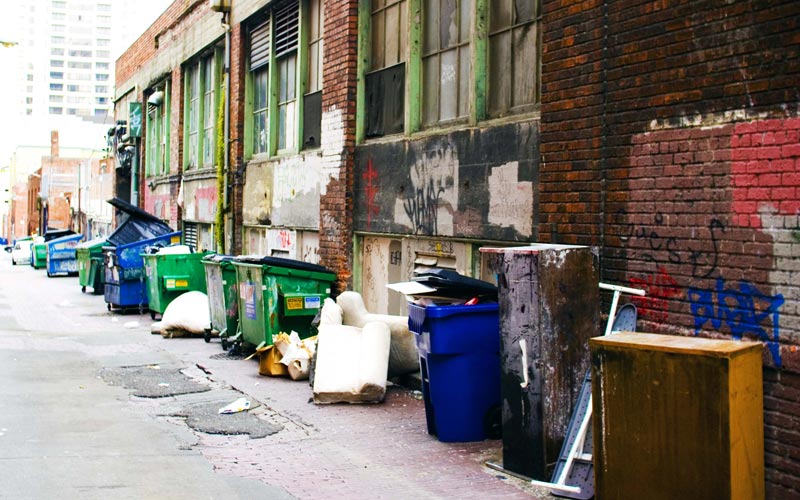 Garbage in a Seattle alley, not an actual photo of The Real World's new Seattle season. (Photo by Bobbi Bowers)

The first time The Real World filmed in Seattle, in 1998, filming lasted for five months; the big twist was that two of the cast members were pre-existing friends; and the season’s big drama revolved around a friendship gone bad that ended with an outing and a slap.

When The Real World returned to film in Seattle this summer, filming lasted for less than two months, and the season’s twist involves moving in an enemy for each of the seven cast members to create drama. And one cast member has previously been on an MTV reality series, a first for the franchise.

Once the show airs, it may or may not include what happened in a bar: a patron yelling anti-gay and racist slurs and throwing a drink on a cast member, only to have a producer insist that the bar not throw the man out, because drama.

Maybe next season will be titled, “How low can you go?”

What we know so far about the new Real World Seattle season:

Update: Sept. 7.  MTV announced the season today, and the Oct. 12 debut date for The Real World Seattle: Bad Blood. (At least they’re going back to including the city name in the title?)

The network also announced the 14 cast members (who’d previously been identified), and described the season this way:

“The Real World Seattle: Bad Blood has seven strangers move into an upscale loft in Seattle’s Capitol Hill neighborhood with the hope of starting an exciting new chapter in their lives, but what they don’t know is there are seven other people coming to crash their party. The roommates will be given the opportunity to revisit a particularly difficult relationship in their lives, capturing their efforts to work through their ‘Bad Blood’ while living under one roof. We watch as the first group of houseguests settle in, while the second group—exes, rivals and estranged family members—are set on a collision course with the people they dislike most in the world! Before long, the second group of roommates invade the house and both groups are confined to the same space. Now, the fourteen must learn to co-exist, resolve their unfinished business and move beyond the conflicts of the past.”