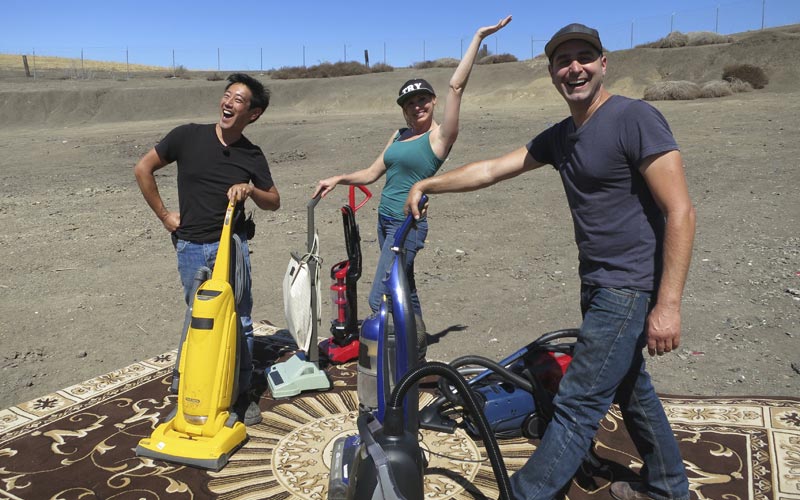 Kari Byron, Tory Belleci, and Grant Imahara, who will star in Netflix's The White Rabbit Project, which is nothing at all like their old show, pictured here. (Photo by Discovery Channel)

Almost two years after the Mythbusters build team of Kari Byron, Tory Belleci, and Grant Imahara were fired by Discovery, the three are getting their own Netflix series: The White Rabbit Project.

Their reunion for a television project has been no secret, especially as the three have posted about it on social media since March. Grant posted a photo “on the first day of studio filming,” which was May 23.

The new series, which will debut Dec. 9 and was announced at Dragon Con this weekend, sounds a lot like their old one, too. According to Deadline’s version of the yet-to-be-released press release,

“…the three head down the rabbit hole to investigate weird and wonderful events from pop culture, science and history. Under their microscope are topics as diverse as jailbreaks, superpower technology, heists and crazy world war two weapons. In each episode the hosts immerse themselves in experiments, builds and tests as they sleuth the truth behind these and other well googled themes.”

Kari insisted that “there will be no ‘busting of myths’ on the” new series. It does sound like what Mythbusters often was, however, just with a welcome broader focus that doesn’t make the “myth” part of the title seem irrelevant.

Besides having three of the same cast members from the original series, the show will also be produced by Beyond Productions, which also produced Mythbusters.