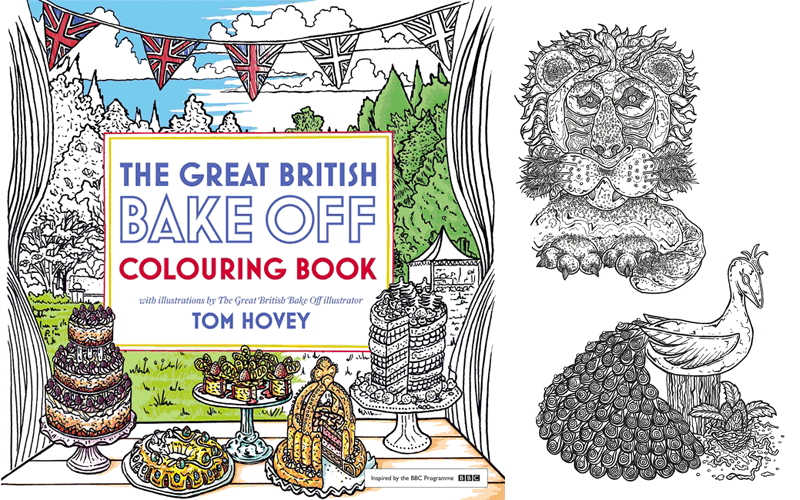 The cover and two sample pages from The Great British Bake-Off Colouring Book, which will be released this fall.

The charming illustrations of signature and showstopper bakes on The Great British Baking Show appear on-screen as line drawings, and then, to the sound of magical chimes, they are filled with color.

Soon, you can recreate that in your own home, if you have some chimes. That’s because the illustrations will soon be available in an adult coloring book.

The Great British Bake Off Colouring Book includes “90 beautiful illustrations by the official Bake Off illustrator, Tom Hovey, including all your favourite showstoppers and iconic bakes from the show,” according to its publisher, Hodder and Stoughton, which also publishes many GBBO cookbooks, such as the “Bake it Better” series.

It will be released Sept. 22 in the UK and Nov. 16 in the US, but is available for pre-order now. (Adult coloring books have become a major trend: 12 million were sold last year, and they’re often used as stress relief and a fun way to practice mindfulness.)

The black-and-white line drawings in The Great British Bake Off Colouring Book are of actual bakes from the show, but the art itself actually mirrors the first season’s illustrations.

In a 2013 interview, Hovey—who proved himself to be as cheeky as the show’s hosts, saying, “I draw everything from blue neon unicorns to Mary Berry’s creamy buns”—described season one’s illustrations as “a lot cruder, thick black lines and no colour.”

For the second series, he said, “I decreased the heaviness of the line and focused on making the colours really bright and bold so that they really popped off the screen. It changed the way I created the images and I felt much happier about how they appeared on screen.”

The book’s sample images include ones from season six, which concluded back in August on PBS, a quick run thanks to PBS’ surprising decision to double-up several of the episodes.

The seventh season of GBBO just started airing in the UK, while the second season of ABC’s new American version will star filming in the UK this month.