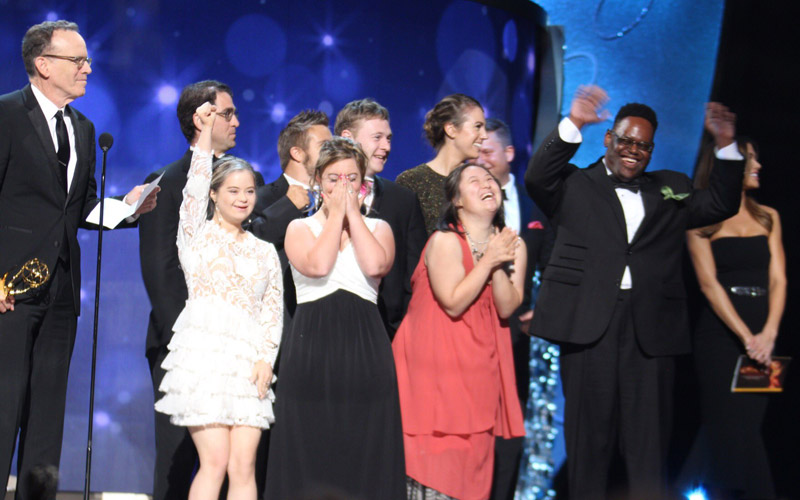 Born This Way executive producer Jon Murray (left) and cast members from the Emmy-winning show (foreground) during the Creative Arts Emmys on Sept. 11, 2016.

Sunday night on ABC are the Emmys: the one night a year that television celebrates its best with a television show that’s even longer and more drawn out than a season two episode of Mr. Robot. One part of television that will be mostly absent from that telecast are reality TV shows and their awards.

The people accepting awards on stage included two female directors, who are also in a romantic relationship; a gay man who essentially created the genre of reality TV; people with down syndrome; and a black gay man who may be most recognizable when in drag.

Why won’t any of that be on television this Sunday?

Of course, I don’t want a longer, more bloated broadcast on Sunday. And yes, FXX will show those wins, but on a small cable network, on a Saturday night. It’s just sad how relatively few people will watch that compared to the live Sunday night show on ABC, which will be preceded by approximately 12,155 hours of red carpet on cable networks and the Twitter.

The list above is an impressive range of shows. But for sure, the Emmys still have a serious reality TV problem. The Television Academy’s members voting is frequently disappointing, and the winners often feel like they’re the result of serious, thoughtful consideration that goes something like: Oh, I’ve heard of that show, from when it won last year, so I’ll vote for that.

Reality television has not helped its own cause.

Most notably, in 2008, when the reality TV host Emmy was created, the nominated hosts hosted the show as a group. They could not have fucked it up more if they tried, but they didn’t actually seem to try. Five very talented people who were all more than capable of hosting a live show spent three hours demonstrating to the world that reality TV isn’t to be taken seriously.

Since then, we’ve been we’re left with just one award being distributed during the prime-time telecast: reality competition series. And honestly, as much as I love my reality competitions—from Road Rules to Survivor to Top Chef—it’s currently the least interesting Emmy category.

In the last five years, only two shows have won: The Amazing Race and The Voice. Compare that to the host category, in which there have been four different reality host winners in the past five years. (Jane Lynch repeated in 2014 and 2015.)

Three years ago, the Television Academy split the non-competition shows into two categories: structured and unstructured reality. They’re imperfect divisions, and the structured category has basically followed in the footsteps of the competition category: the same show, again and again. It has only given its award to Shark Tank, and has nominated the same five shows each year, with just one new show taking that sixth slot.

There’s progress. But for there to be real change, Television Academy voters—and the rest of the world—need to be exposed to the diversity of reality TV. The list of winners above prove that this year would have been a perfect year to do just that, because the depth and breadth of the genre would be right there, on stage, in person.

Without those shows, without those categories, the Television Academy is  just nonsensically and absurdly excluding the the majority of TV shows from the one night a year that exists to recognize the best of television.