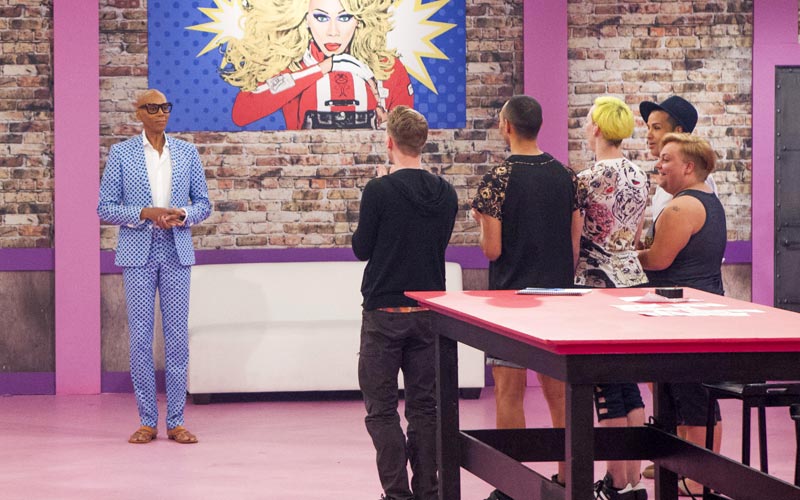 RuPaul talks to the contestants during the "Revenge of the Queens" episode. (Photo by Logo)

RuPaul’s Drag Race All Stars brought back its first four eliminated contestants on Thursday’s episode, which was titled “Revenge of the Queens,” because they had their chance to get revenge: re-enter the competition and send another queen home.

For an eliminated-players-come-back episode, it had a pretty decent structure: The eliminated contestants all performed stand-up paired with a contestant who’s still in the competition. The best two eliminated drag queens lip synced; the winner of that would get her revenge by re-entering the competition and being able to send home one of the remaining contestants.

All in all, a solid twist.

And it also provided an opportunity for my absolute favorite of the moment of the night: RuPaul saying “lip sync for your life”—and then immediately, breathlessly declaring, “god, I miss saying that!”

Runner-up for line of the night was CoCo describing Phi Phi O’Hara and Alyssa Edwards making up by saying, “That hug was like Obama hugging Donald Trump.”

Second runner-up for line of the night was every time Phi Phi said something super-shady and immediately after or before insisting she was new and different and changed this time around.

Back to the twist for a moment: Drag Race did nothing to help its trustworthiness problem, however, when RuPaul announced that both eliminated queens won the lip sync. The twist: both of them would get to send someone home. But lo and behold, it turned out both had selected Phi Phi. I’m sure that decision had nothing to do with the fact that the producers knew both winning queens previously selected Phi Phi’s lipstick.

This season of RuPaul’s Drag Race All Stars has been simulcast on VH1, giving most of the cable TV-watching world access to the show in high definition. But Logo decided that VH1 could not simulcast this episode, the most anticipated one of the season, so that all the ratings for the episode would be consolidated on Logo. (The networks are corporate siblings run by the same person, Chris McCarthy.)

So how did that go?

That means, from week to week:

This was inevitable, though; some viewers who get VH1 do not get Logo. Other viewers, including me, set a season-long recording for VH1, to watch the show in HD, and may not have seen the warnings in time to record the Logo version. In an era of time-shifted viewing, one would imagine that’d be an obvious, predictable consequence, but perhaps it doesn’t matter that some people missed it, since Logo’s viewer totals went up.