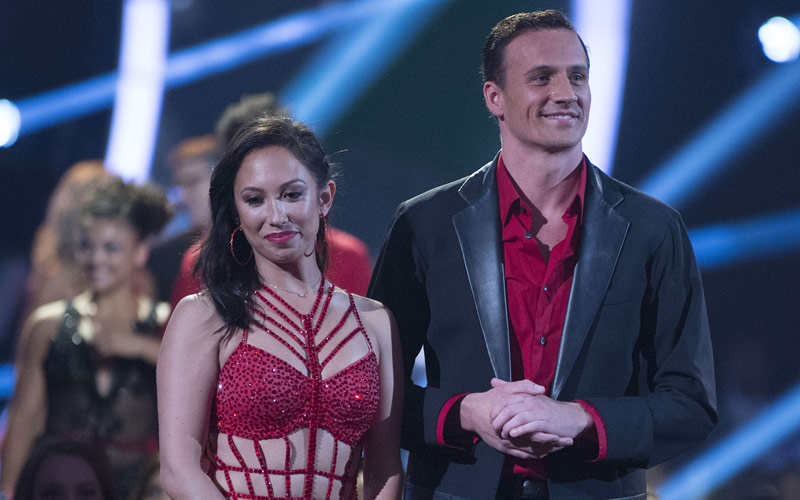 Cherly Burke and Ryan Lochte early during the premiere of Dancing with the Stars 23. (Photo by Eric McCandless/ABC)

As Ryan Lochte was being judged for his first Dancing with the Stars dance with partner Cheryl Burke, someone or some people appeared to shout and then rush onto the stage, before the show cut to commercial.

Right after Carrie Ann said, “This is a place for second chances,” there was indecipherable shouting. The image was a split-screen of Cheryl and a clip of the dance, and didn’t change until after the commotion had ended.

“Excuse me, hey, back off. Excuse me,” Carrie Ann said. There was lots of shouting and she said, “off off—excuse me.” It was unclear what she meant by “off” (Get off the stage? Get off him?).

Host Tom Bergeron said, “Wow, okay” as members of the audience screamed. He then said, “I’ll tell you what, we’ll take a break.”

After the commercial, Tom said, “We are back. We had to go to break because we had a little incident. I would like to personally thank our security team for staying in shape.”

Tom then asked Ryan, “When there’s that kind of strong emotion, what does that make you feel like?”

Lochte said he was, “a little hurt,” apparently meaning emotionally.

People reports that the two men “walked in front of the host Tom Bergeron” and “As the older of the two men approached the camera, security guards pushed him into Lochte, Burke and Bergeron.”

An ABC 7 reporter posted this photo of the two men he said were responsible. They’re wearing t-shirts with the word Lochte crossed out and appear to be in handcuffs or other restraints.

This is the cause of the #DWTS disruption. More to come. pic.twitter.com/0AMkY6P2a1

Update: Us Weekly has footage of the two men approaching the judges table and quickly being pushed away by security.