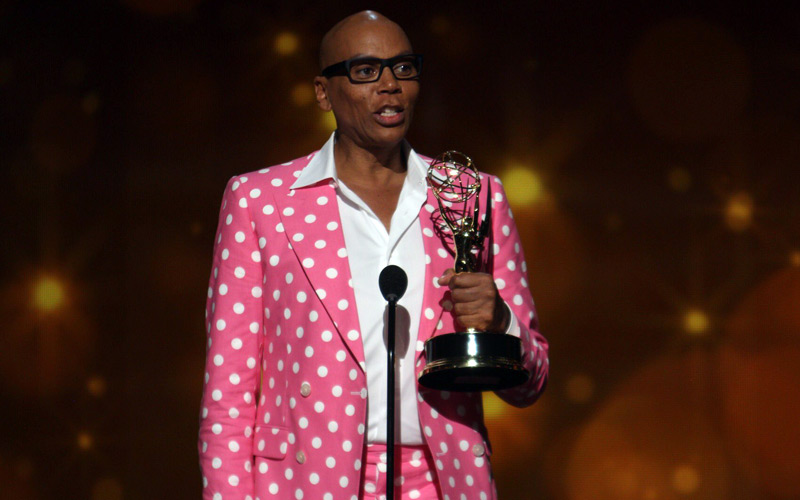 RuPaul Charles accepts the Emmy for outstanding reality program host during the Creative Arts Emmys. (Photo by the Television Academy)

The Creative Arts Emmys were awarded this weekend, and among the winners of reality TV-related Emmys were RuPaul Charles, for outstanding reality show host; A&E’s life-changing documentary series Born This Way; and Netflix’s outstanding Making a Murderer, which won four awards, for directing, writing, editing, and overall documentary/nonfiction series.

RuPaul’s win was for his first nomination, and is only the second time a cable reality show host has won (Heidi Klum and Tim Gunn’s joint win for Project Runway in 2013). He was up against broadcast reality TV savior Steve Harvey and American Idol‘s Ryan Seacrest, whose loss means he will never win for hosting what was television’s biggest show.

Accepting the award, RuPaul said, according to Deadline, “Earlier this year I was quoted saying I’d rather have an enema than an Emmy. But thanks to the Television Academy I can have both!”

Ryan Seacrest didn’t go away empty-handed: American Idol won the Governor’s Award, which was presented Saturday. That’s an award given “to an individual, company, organization or project for outstanding achievement in the arts and sciences or management of television which is either of a cumulative nature or so extraordinary and universal in nature as to go beyond the scope of the Emmy Awards presented in the categories and areas of the competition.”

The Creative Arts Emmys, which are given out a week earlier and not featured in the prime-time telecast, were further split apart this year into two separate awards shows—though they’ll be broadcast together next Saturday night on FXX, and then be online at Emmys.com. The split seems to have been between scripted and reality shows: most reality television and nonfiction awards were given tonight, while many awards for acting were given out last night.

Here are all the winners in the reality and nonfiction categories; winners are in bold. One Emmy remains: best reality competition program, which will be given out during the main broadcast next Sunday on ABC.

Outstanding Host For A Reality Or Reality-Competition Program

This category stayed the same as last year, too, with one change: Lip Sync Battle was nominated and Property Brothers was not.

This category had incredible turnover, with just two shows (Deadliest Catch and Intervention) that were nominated last year getting nominations this year. And this is a great selection of shows that all do different things with documentary-style reality.

Outstanding Directing for a Nonfiction Program

Cinematography for a Reality Program

Cinematography for a Nonfiction Program

Outstanding Costumes for a Variety, Nonfiction, or Reality Program

Outstanding Writing for a Nonfiction Program

Outstanding Picture Editing for a Structured or Competition Reality Program