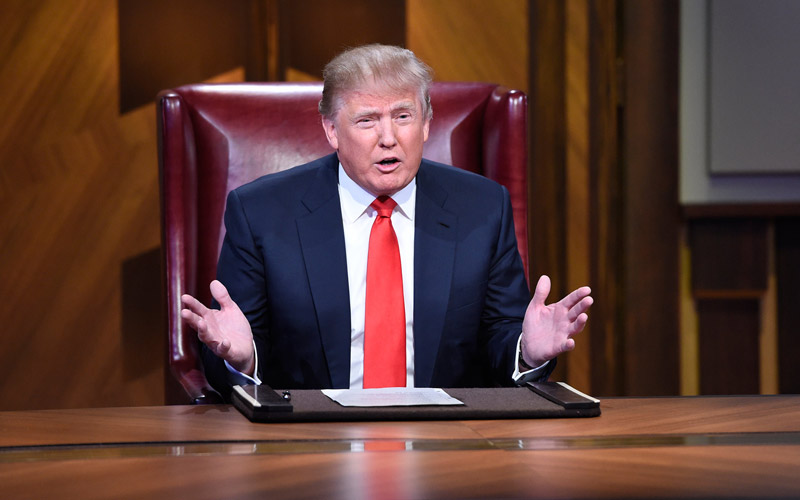 Donald Trump during the Celebrity Apprentice 7 finale. (Photo by NBC)

One of the best parts of The Celebrity Apprentice was that it raised money for charity. And frequently, that money came from Donald Trump himself, as he pledged to give money to charity “out of my wallet” or “out of my own account.” Once he said, “I’m gonna give $25,000,” while another time he promised $100,000 in memory of a contestant’s mother.

Those were impressive acts of charity and generosity.

Trump never paid. Not once. Not a single dollar.

The Washington Post reports it “tracked all the ‘personal’ gifts that Trump promised on the show—during 83 episodes and seven seasons—but could not confirm a single case in which Trump actually sent a gift from his own pocket.”

Some of those donations came from the production company. Others came from the Donald J. Trump Foundation—which sounds like it comes from Trump, but Trump stop giving money to his own foundation in 2008, the year that Celebrity Apprentice debuted.

Instead, others provided the money that was then used to pay out what Trump said he’d personally pay. In 2012, NBCUniversal gave $500,000 to the foundation.

How the foundation raised and distributed money was “very unusual,” according to new reporting by The Washington Post’s David Fahrenthold. Since 2008:

“all of the donations have been other people’s money—an arrangement that experts say is almost unheard of for a family foundation.

Trump then takes that money and generally does with it as he pleases. In many cases, he passes it on to other charities, which often are under the impression that it is Trump’s own money.

In two cases, he has used money from his charity to buy himself a gift. In one of those cases—not previously reported—Trump spent $20,000 of money earmarked for charitable purposes to buy a six-foot-tall painting of himself.”

The Trump Foundation also made at least one illegal donation.

This year, Trump paid a $2,500 IRS fine because that contribution was illegal—charities can’t donate to political candidates.

One promised Apprentice donation was never made

On 21 different occasions, Trump promised to personally donate a total of $464,000 to charities, according to Fahrenthold’s analysis in the Post. For example:

The largest donation Trump promised was not paid by his foundation. Instead, the show itself paid, according to the Post:

“Trump promised $100,000 to the American Diabetes Association, the charity of hip-hop artist Lil Jon. He said that the gift was in honor of Lil Jon’s mother, who had recently died.

In that case, a production company paid.”

NBC wouldn’t comment, and both Donald Trump and executive producer Mark Burnett did not respond to requests from the newspaper.

Perhaps that’s because one of the biggest selling points of the show—its star’s generosity—was fiction.