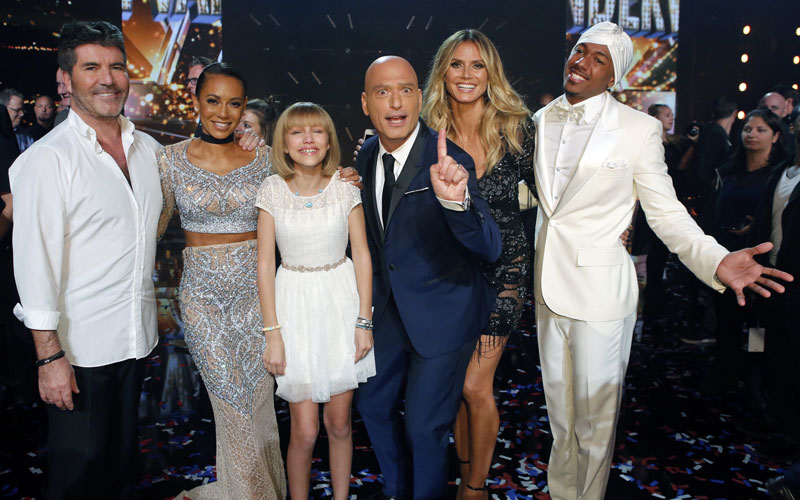 America’s Got Talent felt revitalized this season: it had new energy and a broad range of Vegas-worthy acts (even some singers!). It also had the return of Simon Cowell to American television, for which he brought his A game. Then AGT nearly selected one of its worst acts ever as the winner of $1 million.

Thankfully, Grace VanderWaal, the ukulele-playing singer-songwriter who’s also just 14, took the win and made runners-up out of The Clairvoyants, a bad magic act that pretends their act isn’t magic.

Nick Cannon said that “tens of millions of you voted” for the “biggest vote ever in America’s Got Talent history,” but the results were super close, with “less than one percent between the top three.”

Jon Dorenbos, the football player-turned-magician with very little stage presence and magic, at least compared to the other magic acts this season—and I include the two kids—came in third.

If we must have a singer as the winner of AGT, Grace is a fine winner. Besides having a ridiculously impressive singing voice that sounds both familiar yet entirely new, she performed all of her own original songs throughout the competition, rather than crowd-pleasing covers.

Rounding out the top five were Brian Justin Crum, a meh singer, and Sal Valentinetti, a Sinatra-ish crooner whose finale performance was so strong and so perfect for the stage that I was convinced he might win.

Simon Cowell reminds us of his talents

What characterized this season of America’s Got Talent most for me was the playfulness of the judges. Acts constantly  pulled judges on the stage, and that (nearly always) added to the act, rather than feeling like time-wasting pandering. For example, Tape Face kind of fizzled mid-season, but his finale performance with Mel B. and the toilet seat was so weird but so wonderful, and much of it was due to her role.

The big change going into this season was the loss of Howard Stern and the addition of Simon Cowell. While I really liked Howard Stern as a judge, I didn’t quite find myself missing him.

Simon Cowell’s addition to the panel felt like a net positive. And I write that as someone who loathed Simon Cowell’s behavior during his last few years on American television—his insufferable boredom during American Idol, his out-of-control ego on X Factor.

This new version of Simon was definitely the best parts of him. He was relaxed and funny, acerbic when he needed to be. His interaction with the other judges seemed natural and at ease, even though, as came up a few times, he’s technically their boss.

The judges are inevitably too overenthusiastic for some of the garbage acts (hello, Clairvoyants!), but I most definitely could not figure out Simon Cowell’s constant bewilderment at magic acts. He repeatedly—and quite convincingly—suggested they were examples of real sorcery.

Is he wonderfully naive? Or just playing to the cameras better than he ever has before? In either case, I look forward to next season, when he sees a ventriloquist and is astonished that a doll has come to life.

Even Simon’s wonder at magic acts made the season enjoyable to watch. Much of it reminded me of the joy of early American Idol, and not because Paula Abdul guested on the finale, and also not just because of the proliferation of singers, which is never my preference for this show. (Though now that Idol is off the air, and there are no other knock-off singing competitions left, I may be warming up to it.)

Those early years of Idol had something other shows didn’t, besides its huge audience. It had spectacle combined with human drama, and chemistry that united not just the judges and host but held the show together. To that, AGT adds variety and far more spectacle. The production design and staging for each act is nearly always incredible television.

Though the acts are not always amateur and the show is carefully cast—with a finalist who just won Romania’s Got Talent and other acts who have found success elsewhere—they’re still unknown to most of us.

Settling in for a couple hours each week to see what they deliver, how they can evolve their act (or fail to!), how they play with the judges, how the judges respond: it’s worth the time and consistently entertaining. That was not true of Simon Cowell’s X Factor or final years on American Idol, but this season, he managed to remind America of his talents, too.