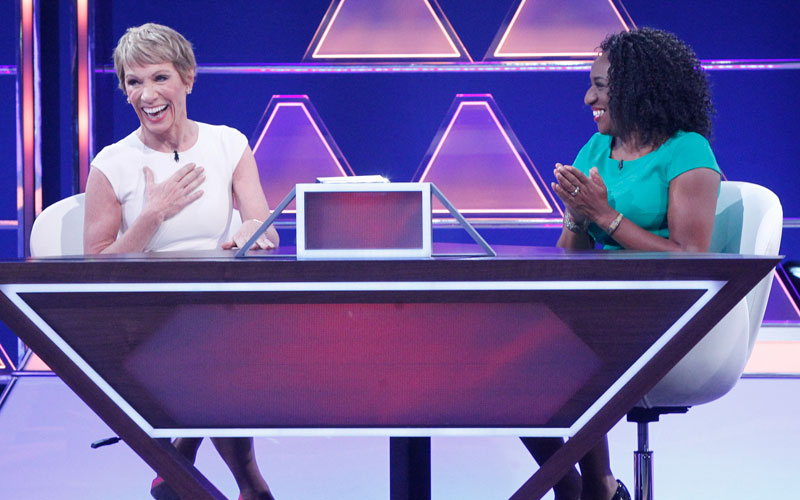 Shark Tank star Daymond John doesn’t know that Daniel Radcliffe starred in the Harry Potter movies. He called him “some guy,”  insisting he hadn’t seen the movie (there were eight movies). Barbara Corcoran isn’t at all familiar with Miley Cyrus: “I don’t even know who she is.”

As their appearance on The $100,000 Pyramid proved last night, these two sharks may have business acumen, but they also have some considerable disconnection to popular culture.

But I’m burying the lead, because beyond that one stumble, Daymond John did very well. He made it to the winner’s circle twice, and while neither of his partners actually won $50,000, he demonstrated that he was easily the better of the two celebrity contestants on last night’s episode.

Oh, Barbara! Just look at this string of hilarious embarrassments:

After her disastrous rounds, host Michael Strahan said things including, “We have been cancelled since Barbara Corcoran came on the show and tore it apart” and “Barbara, what the hell?” (She redeemed herself slightly in that moment, responding to Strahan’s “what the hell” with a reference to her previous “what the fuck”: “That’s not what I say!”)

The full episode is online if you’d like to watch all of her ridiculousness.

Because the game is timed and has such high stakes for the contestants, it seems unfair to pair them with celebrities who have no idea what they’re doing. An occasional flub is understandable and has always been part of the series; a complete inability to play may be entertaining, but it screws over the contestant. I go between laughing at the celebrity (Barbara!) and cringing on behalf of the contestant.

Match Game has a similar problem, where riotous celebrity answers can still screw over the contestants. However, because there are six celebrities, and both contestants each get two chances to match all six, it balances out. (Plus, the judges are very forgiving and give credit for answers that don’t match directly.) And the contestant gets to play for the big prize with the celebrity of their choosing, so their success is less tied to the terribly bad celebrities.

As bad as I feel for those contestants, though, such as Barbara’s hapless partners, I can’t help but laugh. The wheels on the boat go round and round, round and round…