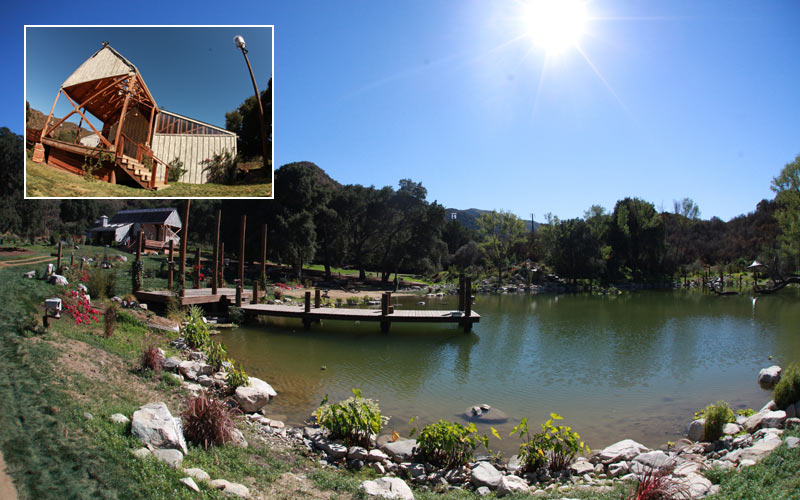 The lake at the center of Utopia's set, which was destroyed by fire. Inset: the barn where the cast lived. (Photos by Fox)

The Santa Clarita, Calif., ranch that hosted the Fox reality competition Utopia and the ABC series Wipeout, among many other film and television productions, was destroyed by wildfire in late July.

“[Ranch manager Kevin] Whitney pulled up to what was once the set of the Fox reality series ‘Utopia,’ where contestants tried to live off the land, with no electricity and no plumbing. There used to be a roughly 3,000-square-foot building where the contestants stayed — but on Wednesday, all that was left were nails poking through the ash on the ground. Whitney heard the whole thing burned down in about eight minutes.”

However, the set of Netflix’s first competition series, Ultimate Beastmaster, survived. The LA Times has a photo of its massive obstacle course structure which has gotten attention post-fire. The paper reports:

“And the set for Netflix’s new competition series ‘Ultimate Beastmaster’ — featuring a gigantic metal beast showing its teeth — survived. Even the flames, Hunt joked, couldn’t kill the beast, and curious sheriff’s deputies and firefighters have stopped in all week to pose for pictures with it. “

Other shows filmed at Sable Ranch include The A-Team, Sons of Anarchy, Robin Hood: Men In Tights, and Jackass 3D.