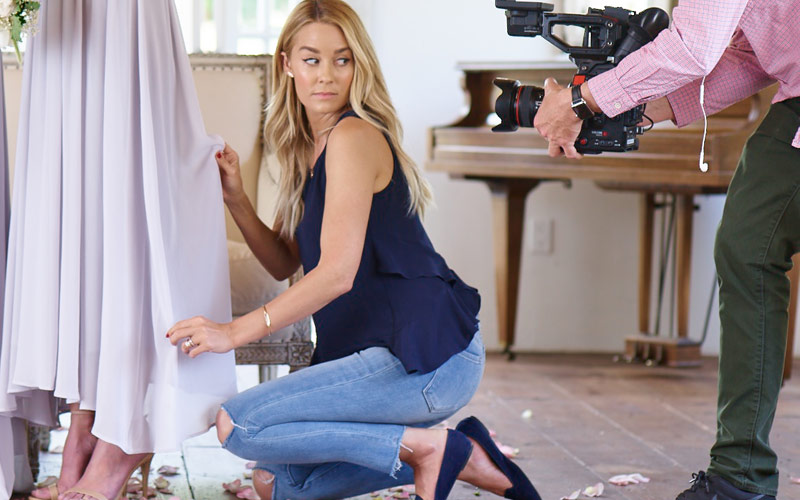 Lauren Conrad, star of The Hills, in a posed photo to advertise the anniversary special "The Hills: That Was Then, This Is Now." (Photo by MTV)

The first season of The Hills concluded 10 years ago July 13, and last night MTV aired an hour-long retrospective. Titled “The Hills: That Was Then, This is Now,” the special promised Lauren Conrad would “address some of the show’s best-kept secrets and reveal what it was really like living her pivotal years on camera.”

So what secrets were revealed? Very few.

Most of it felt like an offering from MTV to Lauren: We used your life, so here, have 41 minutes to look great and talk about your businesses and your fabulous life. It felt as produced and carefully constructed as the photo above.

Of the 41 minutes, the vast majority is footage from Lauren’s life now intercut with clips from the series and Lauren talking about the experience and big moments in her life. She discusses some of it with her parents; talent producer Sophia Rossi; and the executive producer of the special (and The Hills) Jason Sands.

Neither Lauren nor the special reveal about how she reportedly made $150,000 an episode, or $2.5 million a year. They don’t reveal that producers sent dialogue in text messages to the cast, which happened on The Hills spin-off The City. They don’t address Kristin’s claim that most of the show was scripted.

Instead, the special makes Lauren seem like the unwitting, accidental tool of the producers—just someone who was living her life in front of cameras and having that shown to the world.

How The Hills faked some scenes

The special did provide a little bit of insight via a few moments that allowed us to see raw footage from the show, sometimes juxtaposed with what ended up on television.

For example, for a scene at Les Deux, there was audio of Lauren complaining about MTV and producers inviting Spencer just to create drama. “It’s not okay that they let him up here,” she says.

Before watching that footage, talent producer Sophia Rossi showed an outline of the scene to Lauren, which said, “The party is in full swing. … Heidi and Lauren eye each other from across the room.” But Lauren—and this special—played that off not as a script, but as a producers’ guess as to what would happen.

Lauren said, “This is super creepy.” Sophia said, “I was so good at predicting. I used to be really good at it.”

At one point, Lauren said, “it wasn’t fake” and adds, “I took it very seriously, and I felt an obligation to share everything I was going through.” But there is at least one thing that producer Jason Sands—and Lauren—admit wasn’t genuine, and that was her relationship with Brody. Sands says “that was a situation where it became made for TV.”

Raw footage shows Brody and Lauren kissing, and then Lauren pulling away and looking at the crew and saying, “Can we please be done? This is the most awkward thing ever.”

Lauren blames “pressure” from the producers to have a boyfriend leading her to “let them do whatever they wanted.” In one scene filmed in a Paris club, Lauren says now, “I’m pretty sure you guys were picking guys out and sending them over, and I knew that they had already signed a release because they were mic’d.”

The special then showed Lauren riding on a motorcycle with a guy—in circles, just so The Hills could gather footage—and Lauren says that producers really wanted her to kiss him. She didn’t want to, so producers privately told the guy to kiss her, though Lauren figured that out. The raw footage shows Lauren turning her back to the guy and leaving rapidly, keeping her distance. The guy turns to producers and says, “she ran like a thief. She knew everything, you know.”

After showing us that raw footage, the special showed the edited version, which cuts out all of the awkwardness and instead appears as though Lauren is looking over her shoulder and flirting with him as she walks away.

That’s the real lesson of “The Hills: That Was Then, This is Now”: whatever the reality of the situation and footage is, it becomes television in the editing room.