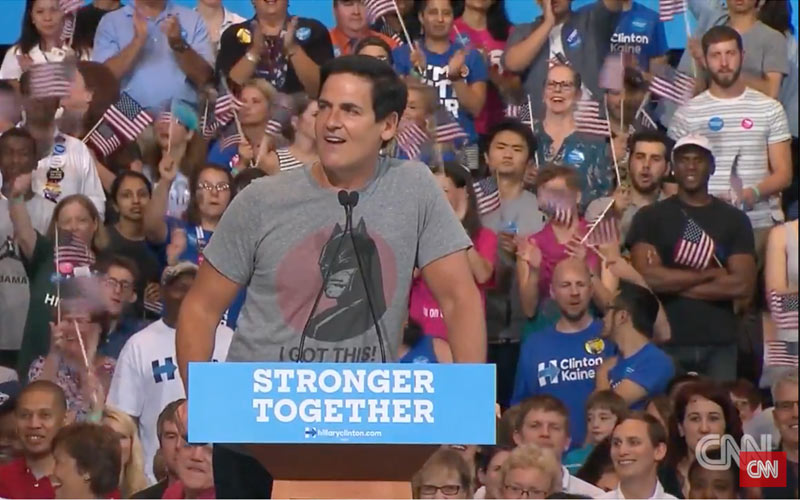 Mark Cuban endorsing Hillary Clinton for president, in a screenshot from CNN's broadcast.

Shark Tank star Mark Cuban formally endorsed Hillary Clinton for president, becoming the highest profile reality star to weigh in on the presidential race, and to take a stand against former The Apprentice star Donald Trump. He did so in a speech at a Clinton/Kaine rally in Pittsburgh Saturday.

That represents something of a shift for Mark Cuban. Back in February, Cuban said on a radio show, “I think he’d be pragmatic. Who knows, right? Do I think he’s as qualified as any of the other Republican candidates? Yes.”

In his speech, delivered while he was wearing a Batman t-shirt, Cuban said he’d initially had hope for Trump’s candidacy. But now, “Trump scares me. Donald, initially, I really hoped he would be something different, that as a businessperson, I thought there was an opportunity there. But then he went off the reservation and went batshit crazy,” he said, according to CNN.

During his endorsement Saturday, Cuban said, “Leadership is not yelling and screaming and intimidating … you know what we call a person like that in Pittsburgh? A jagoff.  Is there any bigger jagoff in the world than Donald Trump?”

After the endorsement, Hillary Clinton praised Mark Cuban, saying, according to CNN, “I can’t tell you how happy I am to be here with a Pittsburgh native, who worked hard for everything that he has made and has helped a lot of people along the way what he exemplifies is the American dream.”

Earlier this year, Cuban repeatedly suggested he was open to being the VP for either candidate, but with conditions. He told NBC’s Meet the Press, “If [Trump] asked me, I’d be like, ‘Okay, Donald. That’s great. Let’s talk about it. But we’re both going to have to dig in and really look and understand the issues so we can come up with solutions.'” At the time, he said Clinton “would have to go more to the center” for him to run alongside her.

Other reality TV stars, including Jennifer Lopez and RuPaul Charles, have previously indicated their support for Clinton, while many others endorsed various candidates during the primaries. None of them have yet appeared with a candidate at a campaign rally, however.

Cuban’s fellow Shark Tank star and terrible Pyramid contestant Barbara Corcoran previously talked about Trump on CNN, saying, “He was my best advocate when I was on his side and supporting him; if you ever differed with him, he was your worst nightmare. He hasn’t changed a bit; it’s remarkable to me.”