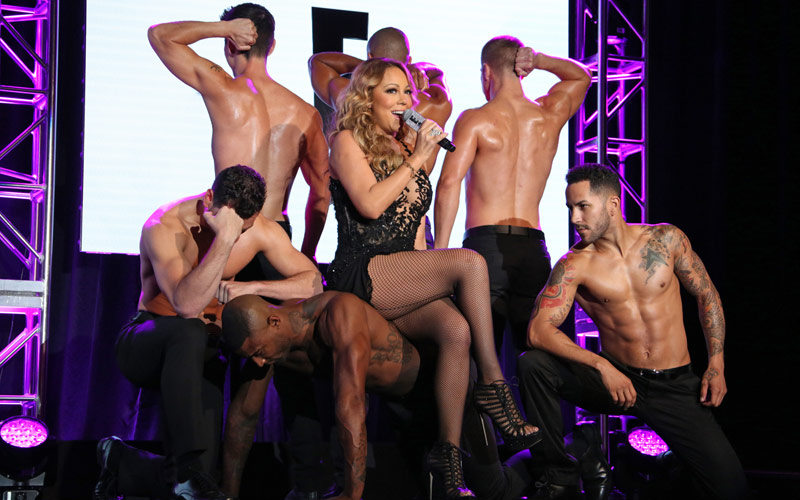 Before Mariah Carey even took the stage at the Television Critics Association’s summer press tour to talk about her forthcoming E! reality series Mariah’s World, she and her network, E!, signaled that this would be a different sort of press conference. Instead of a chair, stagehands brought out a couch—but not just any couch, a purple velvet couch. But not just any purple velvet couch, but one with a throne at one end. Next to it, a side table with white flowers, carefully arranged by a stagehand.

And that wasn’t even the most incredible part.

Mariah was preceded on stage by six men, all wearing pants but no shirts, all of whom had negative body fat and had ever before been in the same room as a carbohydrate. They presented her, and then arranged themselves in the formation above, so Mariah could sit on one of them instead of on her velvet ThroneCouch.

“Shalom,” she said. “So is this perfectly normal. And I don’t know. Should we get into the first question? I’m just so comfortable here on this couch that I just wasn’t sure we should start taking questions.” She was still sitting on the hot guy. The guys, by the way, were either sweaty or covered in something shiny, and those in attendance got a close-up look, because they transitioned into pages, delivering microphones to whoever wanted to ask Mariah a question.

Mariah moved to the real couch, but before any questions began, she started posing for the photographers. “This couch is okay. Let me see. Hi. Photo op. Photo op.”

That was just the beginning of a riotous and wonderful press conference, during which she was both self-deprecating and self-assured. Highlights of what she said about the show and her life are below.

Even better, based on this trailer below, her eight-episode show—which debuts Dec. 4 and is produced by Bunim/Murray Productions—looks like it might be just as fun as the press conference was.

The most amazing things Mariah said during her TCA session

Mariah’s press conference was full of levity and insight. These are the 14 things that stood out to me—which probably lose some of their magic in text form. Maybe just read them aloud in Mariah’s voice to get the full experience.