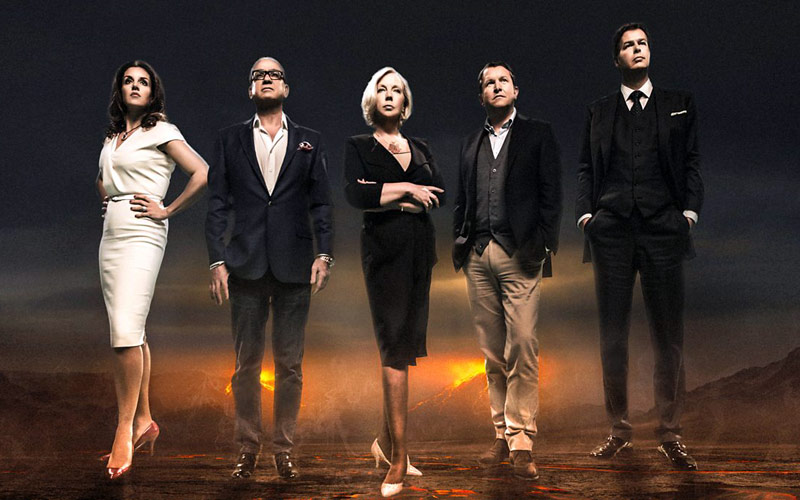 The stars of the 13th series of Dragon's Den. (Photo by BBC)

The UK version of the show that became ABC’s Shark Tank, Dragon’s Den, and the Japanese series that evolved into NBC’s American Ninja Warrior, Sasuke, are both coming to US television.

Tonight, BBC America is debuting Dragon’s Den season 13, and will be broadcasting a total of 15 episodes on Wednesdays nights. (The first three episodes air from 6 to 9 p.m. ET tonight, and then episodes 1, 4, and 5 air from 9 to midnight.)

The network previously aired seasons one through six in 2008 and 2009. In a press release, BBC America president Sarah Barnett said, “There’s a great reason why this franchise is such a global phenomenon: the show has excitement, fun, and a high degree of competitiveness along with the universally shared emotion of cheering for the underdog. We think Dragons’ Den will be a terrific addition to our line-up at BBCA.”

The UK version of Dragon’s Den debuted in 2005, and was based on Money Tigers, a format that aired three seasons in Japan starting in 2001.

Sasuke is back in the US

Meanwhile, Esquire Network announced today that it will bring back Sasuke, known as Ninja Warrior elsewhere, a decade after it aired on G4. It has licensed both the library and future episodes of the show from Tokyo Broadcasting System Television.

A Labor Day weekend marathon of the original 26 Sasuke and Kunoichi (“Women of Ninja Warrior”) tournaments will begin Saturday, Sept. 3, at 7 a.m. ET and end Tuesday at 4 a.m.

TBS executive Makito Sugiyama said in a press release, “As there have been so many requests to bring ‘Ninja Warrior’ back in the US, we are very happy and excited that Esquire is bringing back ‘Ninja Warrior’ and ‘Women of Ninja Warrior’ along with the brand new episodes based on ‘Sasuke #28’ and beyond which were never broadcast in the US.”

New tournaments will air next year on Esquire.