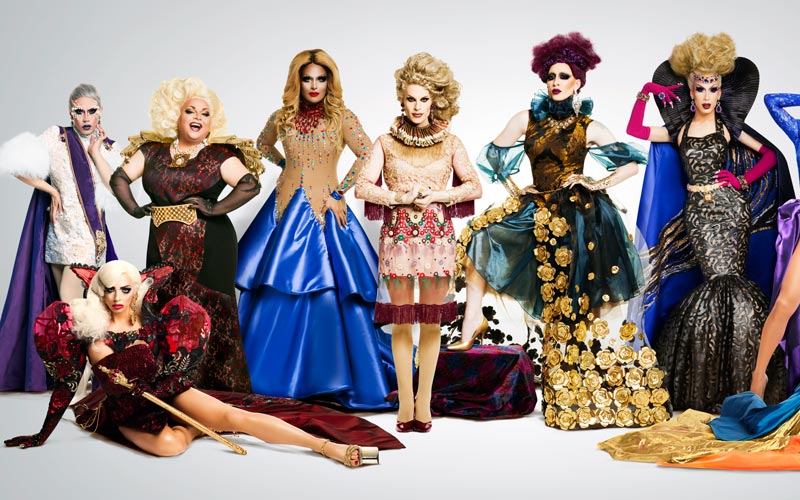 Seven of the 10 drag queens competing in RuPaul's Drag Race All Stars 2. (Photo by Logo)

RuPaul’s Drag Race All Stars 2 released its trailer yesterday, and it reveals a major change to the structure of the competition: instead of lip syncing for their life and being sent home by RuPaul, the contestants will be sent home by each other. In addition, the show will air on VH1.

Instead of the two worst-performing drag queens lip syncing, the best two drag queens will lip sync. The winner gets the right to send someone home.

“The top two will lip sync for their legacy,” RuPaul says in a new trailer published by Vulture. “You’ll be eliminating each other.”

It’s not clear yet how that will work, exactly. Will the winner be able to choose any other person? Will the queen who also lip synced have immunity or also be vulnerable? Will the judges still identify the bottom two and allow the winner to choose between those people only?

However, the trailer suggests that Drag Race will now include alliances and strategy. At one point, RuPaul asks the contestants, “Now who’s your sister in drag?”

While their certainly have been informal alliances, friends and enemies, in the seasons that I’ve watched, I welcome a more strategic version of the show. It’s perfect for an all-star season, where the cast presumably knows each others’ strengths and weaknesses, and may or may not already have pre-existing relationships outside of the show. I’m looking forward to seeing how this plays out.

The new season debuts Aug. 25 on Logo with a 90-minute episode.

VH1 will simulcast the show

Update: Also today came excellent news for those of us who don’t get Logo in HD: VH1 will also air this season.

The network said “it will be simulcast on VH1” starting with the premiere on Aug. 25 at 8 p.m. ET.