Skip to Content
Born This Way stars Rachel, Sean, Cristina, and Steven in season one of the A&E reality series. (Photo by Adam Taylor/A&E)

“This is a show that was not an easy show. Most networks ran the other direction,” Jon Murray told me. He’s talking about a reality show he producers, Born This Way, a documentary-style reality series on A&E that’s currently in its second season. It has a cast of seven young adults—not unlike Murray’s iconic The Real World—though they were mostly friends before the show. They also have Down syndrome.

That may be why other networks wouldn’t buy the series. “It was too niche—it just, yeah,” Murray said, pausing. “They just felt like people wouldn’t watch. It was like, Oh Jon, this is really good that you’re doing this, this is a really good thing, and I hope you find a network.”

The show, now in its second season (A&E, Tuesdays at 10) has been nominated for an Emmy, and has been well-received, both critically and by viewers.

“We’re getting so much feedback from people who say, I just find out I was going to have a baby with down syndrome, and I decided not to terminate the pregnancy because I saw what life can be like,” Murray said. “There are still 80 percent of people who are given a diagnosis of down syndrome, prenatally, terminate the pregnancy. This show—it’s obviously not why we did it—but it is giving people a real honest look at what life can be like.”

Born This Way even affects its executive producer. “I had a distant relative who back in the ’30s and ’40s was instutionalized because they had down syndrome. What a waste that was of that person because, as you see on this show, these people contribute to their families, they contribute to their community,” Murray said.

How Born This Way is filmed 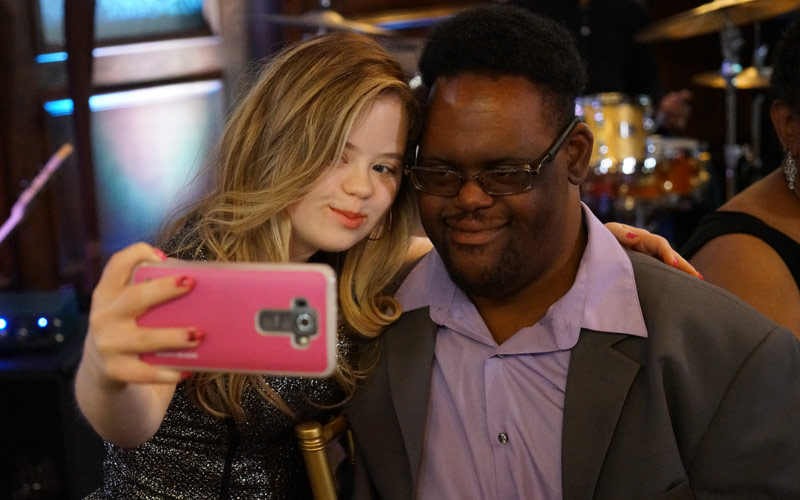 “The challenge of producing reality today is finding those people who are genuinely going to be themselves and who aren’t giving you something they think you want. With this cast and these partents, we’re getting an honest look into their lives, in a way you don’t get that kind of authentic reality,” Jon Murray told me. “That’s what I fell in love with when we first started doing The Real World. Even though we’ve created [the situation] by putting people together, you still got very authentic stories.”

“What I love about this show is there’s an honesty to it because our cast doesn’t have a lot of filters,” he added.

As more than one parent told several TV critics at an informal TCA event last week, their kids aren’t coachable. “We cannot make them do things,” one parent said. “They cannot memorize!”

Instead of coaching its cast or forcing them into situations, Born This Way is filmed over 20 weeks or so, a lot longer than most shows. Murray said they use just one camera crew, allowing the extra time. Similar shows might film a season in just a few weeks because it’s expensive to shoot longer.

Showrunner Laura Korkoian, who started at Bunim-Murray working in casting for The Real World Hawaii, told me, “We have a good amount of time to shoot this show, because change doesn’t happen overnight. Because it’s not manipulated storytelling, I just spend the day with them and sometimes see what I get, and from there, start building your stories.”

For interviews, Murray told me, “We use two cameras. Knowing that our cast sometimes has trouble getting their words out, we can cut back and forth between the cameras and edit those interviews in a way that you don’t notice it as much, as if we had to jump cut it.”

The cast is enthusiastic about the process, as a few of them told TV critics. Korkoian told me, “when I show up at their home, or when we go bowling, they’re just ready to be on camera and live their lives. … We do not force them to do anything they don’t want to do, but I spend a lot of time getting to know them and their families, so I know what they love to do, and  I know the things they’re interested in. So from there, we pursue and we follow those dreams or those stories or those experiences.”

An example from season two: Cristina, Korkoian said, “called me and said, I want to be on Dancing with the Stars.”

Korkoian replied, “I don’t know if we can do that right now, but would we need to do in order to be on Dancing with the Stars?”

“Well, I need to take a dance class,” Cristina said.

Korkoian said, “So we found her a dance instructor who is a dream, who worked beautifully with her.”

Both Cristina and Born This Way’s showrunner are hopeful it will pay off. “Her big goal is Dancing with the Stars, and if anything, these young adults have taught me, put out there what you want in the universe. It will come to you if you believe in it, and they all do. So I think Dancing with the Stars, I hope, will be calling!”

During our interview, Korkoian said she “[thanks] our cast for being brave enough to share their stories.” And because the show is “authentic,” she added, “people are connecting to these young adults, they’re seeing how relatable they are to their own lives. It’s creating discussions between families.”

Korkoian said she’d recently learned of an eight-year-old who watches the show, and told her mother that she’s now sitting next to a girl at lunch who has special needs. Born This Way has made the young viewer want to get to know her classmate.

“I know it sounds really earnest, but it’s the truth, why I’m so proud of this show,” Korkoian said. “Because that young girl who’s at the lunch table, her life’s going to change now, because people are going to see her in a new way, and I think it’s really important.”