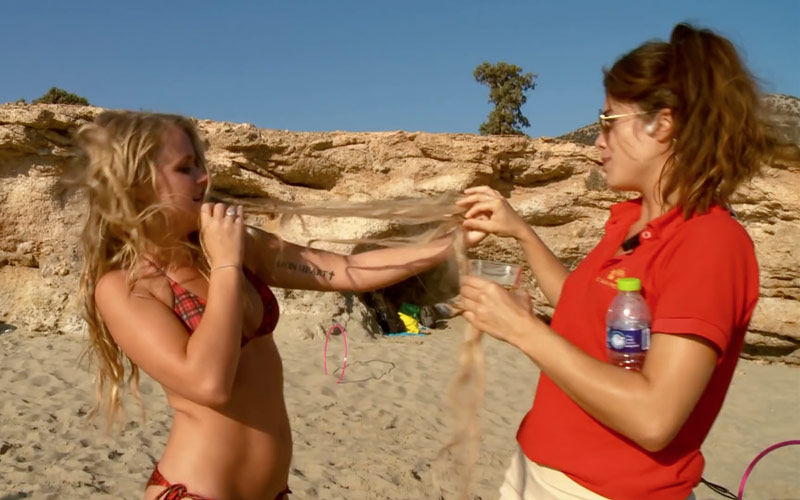 A Below Deck Mediterranean season one crew member helps a passenger with her hair extensions.

A second season of Below Deck: Mediterranean is on its way, thanks to the show becoming Bravo’s “fastest growing show over the past three years among” people 25 to 54.

That means it needs new passengers who will become key temporary cast members, making outrageous demands and adding drama while the yacht sails around.

Bravo describes those passengers as “wealthy and uncompromising guests” and “elite clientele who present a new set of challenges, all while offering the crew a glamorous lifestyle and exotic perks that most people only dream of experiencing.”

Of course, they also seem to come on board with a clear narrative and telegenic demands.

“This is an opportunity for travelers who enjoy the height of luxury to go on a vacation aboard a luxury super yacht at a discounted rate. You and up to seven guests will be wined, dined, and treated like royalty while yachting in and around the Mediterranean.”

A casting request sent to to the site The Forward Cabin said the producer was more specific, however.

It says the show is currently “searching for amazing successful groups of 8 people- family, friends, co workers or couples to charter a 150ft luxury yacht at a discount price.”

That “discount” is more than half-off, according to the producer’s numbers—though it still ends up costing more than $10,000 per person.

What Below Deck passengers get for their money

While season one was filmed in Greece, season two will be filmed in Split, Croatia, according to the casting notice.

The passengers will only be on the boat for three days.

The grand total: $55,000 for five people, including airfare and hotel, alcohol and tips, and “water sports.”

Here are the details from the e-mail message:

“its $55k for a group of 5 people, that includes everyone’s roundtrip airfare to Croatia, 2 nights at a 5 start hotel, 3 days on the 154ft yacht- that normally charters for $207,000 a week, all food and alcohol on yacht, all water sports, crew tip and ground transportation, the trip normally would cost over $100k so its a great deal.”

Not included, obviously, are apostrophes.

The trips will apparently be taking place now until mid-October 2016.

The casting notice for crew members said they would “need to be available to the production commencing August 15, 2016, through and including October 15, 2016.”