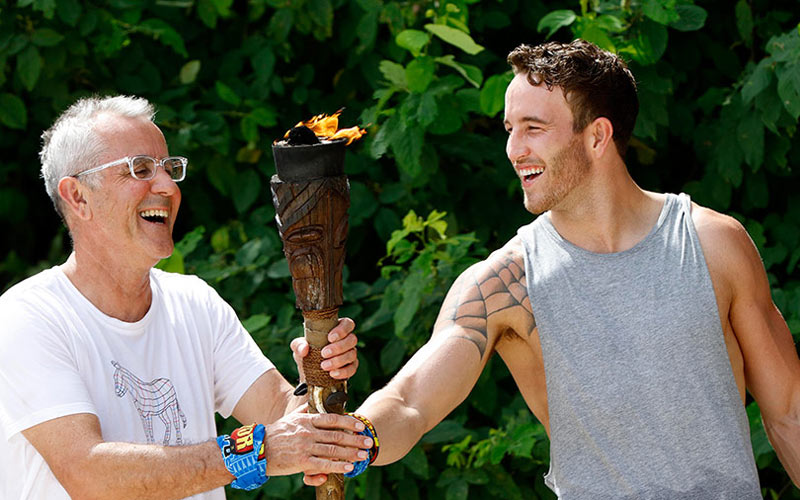 Seven seasons and 19 days was how long it took before someone quit the CBS version of Survivor. Australian Survivor reached the same milestone in just four episodes and 10 days.

On the CBS version, Osten Taylor quit Survivor Pearl Islands, and became the first to suffer the withering shaming of Jeff Probst.

On Sunday’s episode of Australian Survivor, the fourth episode of the reboot, Peter Fiegehen, the oldest contestant at age 62, quit the game. He hadn’t eaten and was sick when the game started, thanks, he says, to chicken he ate two days before the game started, presumably at the Ponderosa hotel.

When he quit, he told host Jonathan LaPaglia—who definitely needs a Survivor logo baseball cap like Probst’s, because the blank cap just looks odd—”I haven’t eaten in 12 days, apart from about 50 calories a day. … I have a big responsibility to the tribe, but I have a lot of responsibility to my family.”

Previously, on day four, Peter said he might quit and sat out the immunity challenge.

“I got gastroenteritis and all the colourful symptoms that happen with that, that we don’t need to talk about. Two days of that and I jumped off the truck. You want to go into the game on your feet and firing off — and I felt like I was crawling backwards from the start. I felt, very, very sick,” he told the Canberra Times.

He also told News Corp Australia Network, “Of course I have big regrets about leaving. But I’m struggling because I don’t see how I could have gone in another direction. All the people I spoke to, including on my tribe of Saanapu, said if they were me they would have done the same thing.”