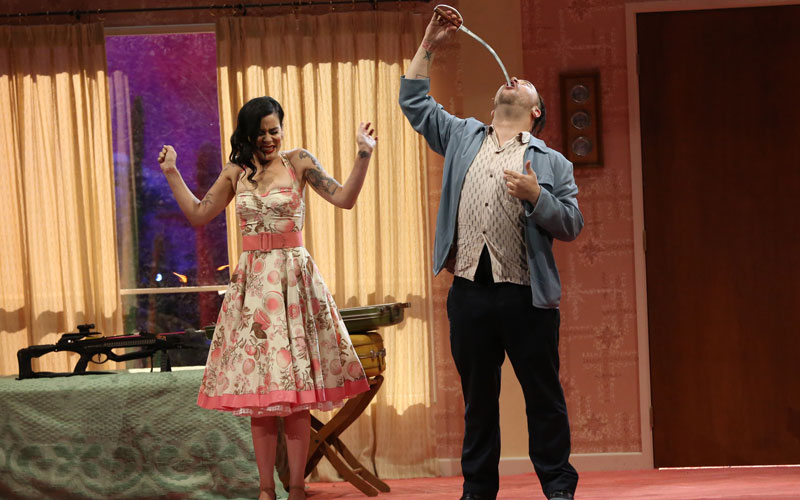 On America’s Got Talent’s second live show, a stunt went very wrong, as a flaming arrow hit performer Ryan Stock in the neck. He was, however, uninjured. But how exactly did the stunt go wrong? Why did the arrow hit him instead of the target in his mouth?

The person who shot the arrow, AmberLynn Walker, told an interviewer for OntheSpotNews,

“It was nerve-wracking for me. I thought I had done something wrong, I thought I messed up, but we reviewed the footage. My aim was on point; we found out it was a weapon malfunction.”

Ryan Stock explained how they knew her aim was correct:

“Amber didn’t shoot it at me on purpose. Looking at the footage, we could see that the laser dot was right where it was supposed to be.”

Amber and Ryan have been working together for 15 years; People reports that they met in 2001 at the Edmonton Fringe Festival, and also starred in a short-lived Discovery Channel reality series, Guinea Pig.

On Twitter, Ryan called it “a very unfortunate mechanical failure.” But what really happened? He explained in the red carpet interview:

“The back of our arrow had broken, and it slipped off of the string, which is actually the only reason it didn’t go through my neck. So I got very lucky: because of the way it slipped off the string, it hit with less power and kind of sideways, and my shirt caught a lot of it. Got lucky tonight—and really unlucky at the same time. … We’ve never had anything go wrong like that on stage.”

In a 2012 interview with The Vault that People links to, Walker said,

“The science aspect is really important. Guinea Pig aside, everything we do for our stage show is researched scientifically. We’re one of the only freak/side/stunt shows that is full time and we’ve never had an injury, and the majority of them have.”

“The whole show is about science. That’s what makes it different from being Jackass. Doing stupid shit is nothing new, it has been around forever, but adding the science to it is what makes it easier to watch. You can watch somebody get hurt, but you can learn something at the same time.”