Skip to Content
Shiri Appleby as Rachel in the second season of Lifetime's UnReal. (Photo by James Dittiger)

Twelve years ago, a hit drama inspired by a popular reality television show captivated the rest of the television-watching world. Lost, a fictionalized version of Survivor and its strangers-on-a-beach dynamic, offered a character-driven ensemble about how survivors of a plane crash coped with their new reality.

Then Lost spiraled out of control, wasting its actors and its other talent by escalating the bad writing and implausible mysteries that were never resolved despite promises from its creators. There was no hatch opened during the season-two premiere of Lifetime’s UnReal, but its second season similarly collapsed into disappointment.

Blind to its own hypocrisy, UnReal has been consistently guilty of the very thing it accuses reality television of doing: mercilessly using its characters as puppets for its creators’ well-intentioned but melodramatic, ratings-obsessed whims.

The only effective thing the second season has done is highlight the show’s weaknesses, in its storytelling and verisimilitude, and allowed UnReal to become the very show that one would have previously expected from a Lifetime, women-in-peril drama.

A satirical Bachelor turns into something even more crass

The pilot episode of UnReal established a very tight core: two strong, complicated characters, Rachel and Quinn, who worked together on a dating reality show. There’s never been a more high-profile, intimate, behind-the-scenes look at reality television, and it was riveting, even when played as a highbrow soap opera.

The pilot (re)created the world of The Bachelor so vivid and precisely that producers who worked on early Bachelor seasons had flashbacks. It took many liberties, sure, but it offered real insight. The manipulated contestants and people doing the manipulating were both products of toxic environments (a dating reality series and misogynistic Hollywood, respectively). UnReal connected us to the humanity of reality TV’s creators and their work product.

As the first season progressed, the show sometimes drifted from that core, but the spiral was tightly wound enough around that strong, well-established center that it always stayed true to that initial vision. It could have continued down that path, satirizing reality television in order to explore how it works and why we are so attracted to it.

Instead, this season the spring has lost all its tension, and it’s just a sprawling mess, with one insane plot point stumbling into the next. None of this is believable, like when Chet and Quinn battle for power by filming different versions of the same show, with competing crews. As part of that, suddenly Chet has an  obstacle course set up on location, as if that takes no time or effort at all to construct. UnReal no longer cares about the details of reality TV production, instead preferring to just hit the same note it played loudly last season.

In UnReal’s version of reality television, producers mercilessly play naive contestants, using knowledge of their psychological history to manipulate the women into increasingly-dramatic scenarios. That reached absurd heights in season one as a producer swapped out one contestant’s meds, and then the contestant hurled herself off a roof.

You’d think this would cause some soul-searching, even among the most callous of producers, but UnReal insists the opposite: it’s just another day in reality TV. It’s also now become just another episode of  UnReal.

A season of producing a show-within-a-show has apparently caused a collapse of the lines between the two, because UnReal is now consistently doing the same things that its characters do on Everlasting. That’s a cloud of irony thicker than the smell of melting candle wax in the actual Bachelor mansion.

In episode three, UnReal producers orchestrate a contestant’s meltdown by encouraging her to confess secrets from her childhood, and then convince the bachelor that she’s lying, by using an actor who pretends to be her mother. She’s carted off by security.

In the same way the reality show Everlasting discards her, so does UnReal. The character is underdeveloped and used only as a tool by the writers. But that was only a shadow of what was to come.

UnReal’s most recent bad decision was to have Rachel, Everlasting’s long-suffering but highly talented producer, deciding to be a good liberal and use her dumb reality show to illustrate how some cops mistreat black men.

She calls the police on her star—the first black suitor, as she can’t stop saying to everyone around her, using it as a blanket excuse for her behavior—and his manager/cousin, Romeo, and then secretly films the traffic stop. When things start to go badly, she runs out of the bushes, and in the chaos a cop shoots Romeo.

The most inexcusable thing, however, is actually not Rachel setting up the circumstances in which there’s a police shooting—as credibility-straining as that is, it just might have made sense in the same world where producers led a woman to suicide and then used it to their advantage.

Instead, after the incident, UnReal completely shifts its focus to Rachel, ignoring the man who was shot. The black characters disappear and it becomes about Rachel. She may be the protagonist, but once again, UnReal is accusing reality television of ignoring black men (which The Bachelor has done!) and yet it does that by actually ignoring black men and their experience.

UnReal wants to tackle big, important issues. But it’s giving us the middle school essay version that it thinks is worthy of a Nobel Peace Prize, or at least an Emmy. It’s neither.

UnReal has turned its characters into caricatures

In another Important Moment Brought to You By UnReal, this season also gave us Rachel being physically assaulted by fired camera operator Jeremy. Rachel is rescued by Chet, the creator of Everlasting, who also kidnapped his own baby. Rachel wants to call the police but is convinced not to, because of fear for the things Jeremy might tell the cops.

Like most characters this season, Jeremy seems to have gone insane, making bizarre decisions that are inconsistent with what we know of his character. Nothing seems to have an impact; everything seems disposable, though Rachel suffers from the assault. Even that, however, is used to generate more plot points—Rachel produces the southern bachelorette, who has taken the black suitor to her home, into revealing her pregnancy in front of her family—instead of actually exploring it. 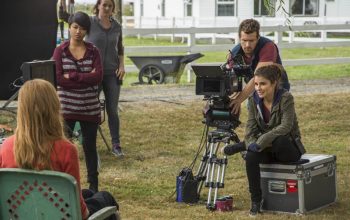 A contestant interviewed by Shiri Appleby’s character Rachel is filmed by Josh Kelly’s character on UnReal season one. (Photo by James Dittiger/Lifetime)

The actors do their best with the material that’s presented. Their characters’ actions, however, rarely feel real because the actors are being asked to play puppets operated by a child.

Why is Quinn suddenly in love with a network executive? How do Rachel and new showrunner Coleman have time to carry on a romantic relationship and develop pitches for new reality shows while actually producing Everlasting? Where are their motivations? Why should we care about them? Never mind, UnReal is on to the next crazy thing!

What I loved about season one was that these characters—the two female leads, especially—weren’t just cartoon versions of some bitter Hollywood writer’s version of reality producers. No, they were complicated and imperfect: often behaving in reprehensible ways but also sympathetic, products of a gross environment that prioritizes all the wrong things.

There’s no one left on this show who’s sympathetic, save perhaps for Jay, a producer who, as played by Jeffrey Bowyer-Chapman, is constantly wondering just what is going on. Good question. The characters vacillate between being brutally manipulative, easily manipulated, bizarrely naive, surprised and hurt, depending upon whatever nonsensical scenario the writers of UnReal have conjured.

What’s failed the characters and their actors is the writing. Everything is convenient, not realistic. For a show that already stretched its timeline, season two has been leaping from one thing to the next in less time than it takes Chris Harrison to say “this is the final rose.”

Why is this reality TV satire failing?

As it has meandered into the black hole of its own self-importance, UnReal has gone from soapy fun with dark turns to unbearably stupid and irredeemably miserable. How could a show turn so quickly?

A recent New Yorker profile of UnReal co-creator—and former Bachelor producer—Sarah Gertrude Shapiro offers a possibility of what went wrong. Showrunner Marti Noxon says that, during season one, “There was about as much drama behind the scenes as ended up on the screen,” but she also calls her relationship with Shapiro a “contentious and fruitful … collaboration.”

This season, Noxon left early on for Girlfriends’ Guide to Divorce. She’d had final script approval last season. Meanwhile, supervising producer Alex Metcalf told the New Yorker that, in season two, “you have to raise the stakes.” And the magazine reports that “Shapiro was proud to have found a way to insert the national debate about race into her seemingly lightweight show.”

Artificially raising the stakes is something that’s hampered reality television for years now, as producers have to find ways to force cast members into unlikely scenarios or just create that in editing, turning people into human debris just to crank out another hour of television.

UnReal wants to be a reflection of reality television’s worst instincts, the over-dramatizing and sensationalizing of reality at great cost to both the cast members and the people behind the scenes. This season, the monster has climbed out of the mirror.