Skip to Content
The Runner host MatPat talks to the media about the game in Control90, the show's headquarters. (Photo by Jeff Lewis/AP Images for Verizon go90)

More than 14 years after it was to debut on broadcast television, Matt Damon and Ben Affleck’s competition reality show The Runner has arrived.

Starting at noon ET today, the runner will be released and five teams will chase that person, armed with clues and their phones. Those teams have just half of the information they need to figure out clues, however; viewers receive the other half, and can help the teams. Those teams can give cash to helpful viewers—$1,000 a day per team—and one viewer will receive $50,000 at the end of the season just for participating.

The show will unfold over the next 30 days on Verizon’s go90 app and Aol.com—and even if the runner is caught, the show will start again the next day with a new runner.

Where and when to watch The Runner

Watch The Runner on:

There will be three daily episodes, which are five minutes long each. Yes, it’s just 15 minutes per day. Those episodes air at:

What happens every day

The Runner will take off, heading for a specific destination. That person may actually walk or run, but can also travel by car, airplane, boat, or train. At noon ET, the teams receive half a clue and viewers receive the other half, and work to solve it together. The 3 p.m. episode will show who solved the clue first.

The teams will have full access to their phones all day, not a filtered stream. “On all reality shows, you take their phone away. We fucking gave them phones and said, You gotta use this tool. They can build their community of social followers to help them catch the runner,” Piligian told me.

Teams will be able to anything from search to FaceTime-ing their followers. Nichols added that they can even “watch the show on go90 as they’re playing the show. … They can do whatever they want to solve that clue.”

The Runner is geofenced, meaning that there’s an invisible, GPS-driven perimeter around them, and when teams get close and cross that boundary, they’ll receive another clue.

That second clue forces each team to make a choice about solving it: “Do we crowdsource from America, or do we try to solve it ourselves? It’s a game of strategy,” Nichols said. “The reason they would try to solve it themselves,” he said, would be to not publicly reveal the information they’ve received and thus “not let the other teams benefit from my lead.”

Teams inside the geofence will then try to capture The Runner.

At the end of each day, if The Runner has not yet been caught, they will enter a safe zone, and the process begins again the next day.

What happens if The Runner gets caught?

A new Runner will start running the next morning.

The team that catches The Runner will stay in the competition and try to catch the next runner.

Word of the show first surfaced in Nov. 2000, just a few months after Survivor concluded its first season. The Runner was initially supposed to debut Jan. 7, 2002, on ABC, and it even held open casting calls. In Oct. 2001, after the Sept. 11 attacks, the show was put on hold. Five years later, in 2006, Mark Burnett teamed up with Damon and Affleck (via LivePlanet) to develop the show on Yahoo, though it was never greenlit.

Piligian was actually involved with the ABC version, and told me, “It’s been a 16-year gestation period so we’re over the moon to launch.” Back then, he said, “it was a national game, people could play, catch the runner, win a million dollars,” and today, the central concept remains the same: “it’s a national manhunt played out over 30 days.”

The one major difference is in how viewers will interact with the show. Nichols said that because of the shift in technology—smartphones, social media, GPS, et cetera—“you could have never imagined back then the things that we could do today. Otherwise, at its core, it’s the same show.”

There were two major challenges to producing the show, according to Piligian:

Involving the audience in the chase safely

In his description of the 2001 version, Piligian said “it was interactive, but it was unsafely interactive.” He elaborated, hysterically: “At that time, the way to catch the runner was to tackle him in the middle of the fuckin’ street,” he said. “The runner would have been tackled and tied and drawn—I got the fucking runner right here! He’s tied up in my fuckin’ basement, come give me my million dollars. You couldn’t even insure that, all of America looking for him. It was just too unsafe for the runner. The insurance was difficult…you just couldn’t do it.”

Now, audience members participate from home. “All of America can play because it’s all played out on the computer, on the app, you don’t have to leave your armchair,” he said.

Nichols said “you can win a lot of money playing this game at home”—teams themselves have a combined $150,000 to give away throughout the season to fans. 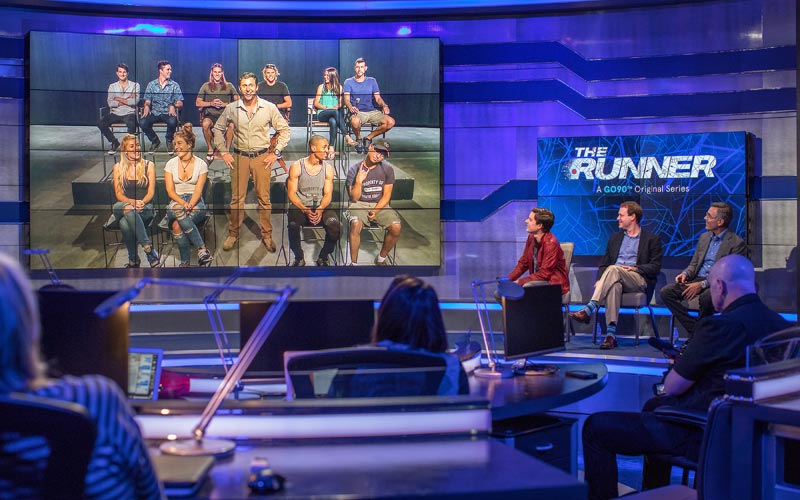 The Runner co-host Kaj Larsen, on-screen with the five chase teams, at a press event in the show’s Control90 headquarters. (Photo by Jeff Lewis/AP Images for Verizon go90)

All chase-style reality competitions raise a key question for me: How can you have someone being followed by a camera crew without giving away their location?

The Runner will be filmed, of course, but without giving away that person’s identity. Piligian told me they solved that problem. “That’s a little trade secret. We’ve developed a way to shoot,” he said. While chase teams will be filmed normally, “The Runner we have to have to shoot very surreptitiously all the way through. We’ve developed a system of how we’re going to shoot that to where we can have the great coverage but not reveal what we’re actually doing. And I don’t want to get into to how we’re doing it, but you’ll see that the coverage is going to be fabulous.”

The identity of The Runner is secret for now, but Piligian told me that “the longer the chase team runs, the more identifable they will become.”

Nichols added that viewers can try to figure out who it is. “Hopefully America will get out there and take pictures and try to help the chase teams by identifying The Runner,” he said.

What’s on each of the three daily episodes

Although the episodes are just five minutes long each, and are made for viewing on mobile devices via an app, Nichols said that the show is “edited just like you would edit a broadcast-level show. It feels big and exciting and has a lot of action. It’s very raw, you know what you’re seeing is real and unvarnished in some way. It’s not overproduced, but it looks big and it’s very exciting. We already cut some tests and it’s heart-pounding.”

Here’s what to expect during each five-minute episode, according to press materials:

Daily Episode #1 (9 am PST/12 pm EST)
This first daily episode includes a recap from the prior day’s action and the LIVE reveal of the day’s first America’s Cash Task (ACT). As the ACT is announced live–anyone watching live on go90 or AOL.com can view and start participating for chances to win cash prizes.

Daily Episode #2 (12 pm PST/3 pm EST)
The second daily episode is a LIVE in-studio update and analysis of the current game status. The Runner hosts will also break down the current social media conversations that are happening across multiple platforms.

Daily Episode #3 (7 pm PST/10 pm EST)
The third daily episode will be the final daily update, as the game concludes for the day. During this episode, viewers will get insight into the Chasers and their relationships. Our Hosts will also provide analysis on the Runner and Chase teams’ current standings and strategies.

How to play at home

The Runner is pitching itself as highly interactive, and viewers can win $1,000 a day by giving tips and other support to teams. The show also says viewers should:

Who are the cast members?

The Runner is unknown at this time, but will be revealed over time.

The Chasers, aka the teams competing to find The Runner, were revealed Tuesday, along with their team names:

The live episodes and host segments will be filmed at a studio that’s being called Control90. “Picture a bustling newsroom where there are a number of people, dozens of peopple, who are tracking the game in real time,” Nichols said. “They’re watching social, they’re watching all of the chase teams’ social following, all of their interactions with the audience. They’re watching GPS. We’ve got all of our players tracked on GPS in a way that you’ve never seen before and it’s incredible.”

The future of The Runner

When I interviewed him Thursday evening, Piligian was enthusiastic about both the show and its potential. “This is why we’re so excited and you hear my heightened sense of excitement in my voice—it is the first time you’ve taken a broadcast quality show, you’ve put it on an app, you’ve made it 30 days straight live, and it’s a national game that everyone can play,” he said.

“If it is successful and this works, this is the tip of the iceberg. We can create content with gameplay and all of this internet social stuff, for anything.”