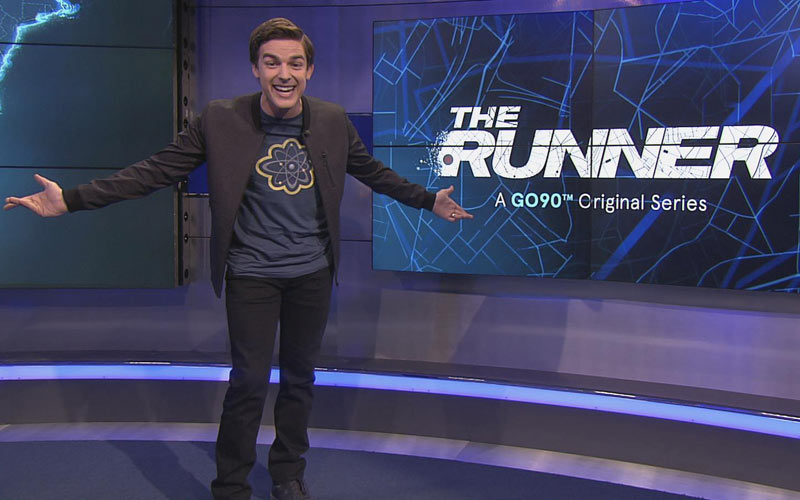 The Runner host MatPat in the show's studio control room.

Two-thirds of the way through The Runner, go90’s cross-country chase reality competition, the show that’s been 15 years in the making has proven the value in its concept, delivering a non-stop, interactive, compelling, cross-country competition.

At its best, the show is simply thrilling, just a cat and mouse chase. Watch what happened when the game confined the teams and a runner, who’d changed clothes and shaved his beard, to a small area of New Orleans.

The show is frequently and delightfully tense, even when—or especially when?—the footage of the runner isn’t great thanks to whatever covert way they’re filming that person. And even if there’s some Amazing Race-style playing with time to make people seem closer to each other than they actually are, it works.

Every day is a new chase on The Runner, and the daily chase unfolds over three episodes, though there’s enough recapping and summary that it’s possible to dip in any time and understand what’s happening. The evening episodes—which are live at 10 p.m. ET—are the ones to watch, since they recap the day’s action and feel the most like a traditional reality show.

The chase teams have to solve puzzles and complete challenges to find out where the runner is, while the runner has to complete tasks before she or he can rest safely for the night. Those parameters are set by producers, but the production has found balance between overly controlled movement and freedom.

For example, on the day Steve was captured in Louisiana, he said later, “I had no information other than I had to move around the city.” If he stopped moving, the teams would be given his location.

That’s a nice realization of the raw central conceit: one person being chased.

The Runner has some rough edges. Last Saturday’s episode made the odd decision to show the runner’s capture by separating each team’s footage with host segments, so it wasn’t presented as a narrative. The episodes could use more character development, too—they trickle out information about each runner, but the teams remain a little more elusive for me.

The show could also do a better job of explaining what’s going on sometimes. There are occasional gaps in time, geography, and my understanding of exactly what is happening and why. I wouldn’t mind a companion web site that collects all the information, history, and episodes; scrolling through social media posts isn’t an easy way to catch up. Of course, social media makes sense as a primary home for a show that’s unfolding live.

A host of energy—and a lack of it

I do appreciate the challenging nature of this production, which is longer than The Amazing Race and is crossing the country with a 100-something person production team. The editing is happening in near-real time, which is impressive considering how fully formed many of the episodes feel.

And of course, the production has no idea whether or not the runner will be captured or will keep going. The production’s preparation keeps the game moving regardless of what happened the day before. And producers have also introduced at least one unexpected twist: after two runners were captured, they joined the competition.

As engaged as I’ve been with the show, I find myself losing interest sometimes, and that’s mostly during the first daily episode, and specifically the live start to the day’s action. That episode lacks the energy the rest of the show has in abundance.

In-studio host MatPat’s exuberance at first made me pull back from my screen a little. But he’s a pro at hosting, juggling all the moving pieces while charmingly improvising his way through any stumbles or unexpected moments. It’s impressive.

On-location host Kaj Larsen could use some of that energy. Even his countdowns, which start the teams on their chase for the day, lack any sense of urgency, and other moments can be cringe-worthy. Yesterday, as teams searched through barrels of salt water taffy, he tried to suggest that the surfer team would be good at this because of the salt water connection. His daily Q&As with the teams are equally flat—a slog that lacks the spirit of what’s coming and makes me long for Julie Chen’s insightful questions.

Neither host has an easy job, of course, considering the nature of this competition. And they both shine sometimes in their platonically flirty interaction with each other, which The Runner smartly uses to its advantage.

Interactivity yields a waterfall of cash for viewers

There is cash flowing to users—two friends of mine have together have earned $2,500 so far—who solve twice-daily puzzles and help the teams on social media.

At least, that’s the idea. The teams, however, don’t always seem to need viewers’ help, perhaps just because they’re good puzzle-solvers themselves, and so the interactivity doesn’t always play out on screen.

Sometimes it seems like they don’t actually use viewers’ information, like on Saturday, when the second runner was caught. Chaser teams had a clue with a missing line; most teams seemed to figure out that it referred to St. Martin. Then they were just told to go to Lafayette.

Still, The Runner is engaging its viewers far more than most attempt. (I am consistently saddened by how Big Brother squanders the opportunity it has with its passionate, active fan base. And I wish more of them would discover The Runner.

Discovery does seem to be an issue for the show, which is broadcast live on go90’s app and on its web site. There have been some technical stumbles—the first few days, one URL wasn’t working for me, and finding the live stream was oddly challenging. This past week, watching live on the app, I hit the rewind 10 seconds button (a nice feature!) and I was rewound to the beginning.

The real-time interactivity is awesome, and the production of three daily episodes with live components is an impressive feat. And so, too, is producing a show that works online and on mobile devices.

What I long for, however, is a television show version of this. This may be my inner late-30s talking, but I just want to watch a narrative, linear version of the events. The evening shows come close to this, and I’ve found myself watching those more than anything else.

Those episodes are strong enough that I could see a version of this on TV. At the very least, I long for a maybe a once-a-week, hour-long episode that covers everything from the preceding week in a more traditional package.

That could help draw more viewers, and while Verizon hasn’t released any numbers beyond saying the app has doubled its number of users, it doesn’t seem to be taking off on social media, as Variety recently reported.

Even if Verizon is happy with the numbers and gives it a second season, which I hope they do, The Runner needs more exposure, more marketing. It’s delivering a product that deserves a larger audience. People aren’t going to chase The Runner in this era of too-much-TV-content, but once they find it, it will capture them.