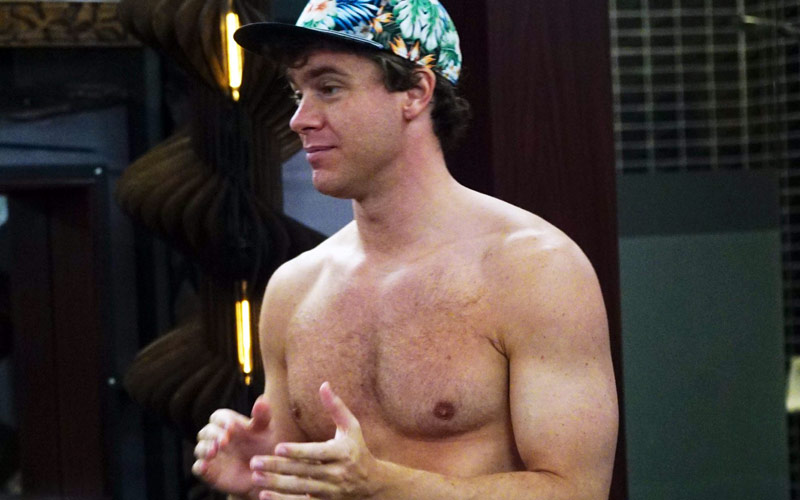 Frank’s behavior consumed most of the first half of the episode, and to the show’s credit, it both included examples of his behavior and the editing, at least, didn’t try to dismiss it or ignore its consequences. (The show has a long history of sanitizing bigotry and other bad behavior. For example, the show has not yet included Bronte’s statements about James, such as, “I want to kick his little Asian ass back to Hong Kong…wherever he came from.”)

The editing introduced a montage of Frank’s harassment by having him say, in the Diary Room, in yet another disingenuous-sounding soundbite, “I might be the old man of the house, but I’m a kid at heart, and I love this game and so while I’m here, I’m going to have as much fun doing it.”

The editing then cut to footage of:

This culminated in Frank actually hitting Da’Vonne and leaving her in tears.

The actual moment happened off camera—in a soundstage house with 87 high-definition cameras. We heard Da’Vonne say, “Stop hitting me on my ass, Frank.” Frank then admitted what he’d just done, telling others: “I got her pretty good.

Da’Vonne went into a bedroom, crying, upset with his unwanted physical contact and his verbal harassment. As others comforted her, Frank walked in and said immediately, “Whoa, what’s up girl—I didn’t. I’m sorry, Da.”

Da’Vonne went to the Diary Room and told the producers, “Can I just sit in here please?” She then said, “I don’t want my daughter to see that and think it’s okay for guys to hit girls on the butt and guys to call girls sluts, or guys to tell women to shut their damn mouth. I’m raising a daughter.”

In a clip shown later, she told the Diary Room camera, “I don’t care how much I make you feel like we’re good friends, I ain’t never told you you got permission to slap me on my ass. Them words have never come out of my mouth and I have never given the impression that was okay.” She added, “I am trying to play this game, but I don’t know how to handle it in a way where I don’t jeopardize my game in the house.”

In a conversation about Frank, Zakiyah called him a “creep” and Tiffany said, “He’s not worth you risking your game for.” Both said that they would all just have to wait for him to be voted out in two weeks.

When some of the other cast members encouraged Da’Vonne to not react to Frank’s harassment, she said, “I’m trying, but I don’t want to be Da’Vonne from last year, so I’m just trying to shut up.” She added, “Damn, I feel like a punk. This man just say whatever he wants to say to me.”

Meanwhile, Frank tried to dismiss this. “I just kinda popped her butt. It’s not the first time. Usually she laughs. It’s something I do with my mom and my nana,” he told James. “If it’s something I do to you, it’s usually because I feel really close to you, and also I was really excited.”

Later, he talked to her, and in a rambling apology—he did say “I apologize”—he also kept pushing responsibility onto Da’Vonne:

“I apologize. I don’t mean anything by it. I didn’t mean to offend you or anything. I do that, it’s usually because I look at you—because I’m really close to you. I didn’t mean it in a bad way. I won’t cross that line if it makes you uncomfortable. You know what I’m saying? If I don’t understand you don’t want that done like that and people seeing that, so I just want to know I obviously apologize and don’t mean anything bad by it. I think you know my intentions were all good. I’m just sorry. That’s the last thing I want to do is offend someone I feel close to.”

Even if his apology and rationale are entirely genuine, what’s clear is that his behavior has created an atmosphere where Da’Vonne has to pretend like his unwanted advances and verbal taunting does not bother her.

That sounds like sexual harassment, or something very close to it. The EEOC defines it this way:

“Unwelcome sexual advances, requests for sexual favors, and other verbal or physical conduct of a sexual nature constitute sexual harassment when this conduct explicitly or implicitly affects an individual’s employment, unreasonably interferes with an individual’s work performance, or creates an intimidating, hostile, or offensive work environment.”

“I have to go along with his apology because he’s running this HOH this week, so I have to make sure that I’m on his good side. For my game, I just smiled and told him I appreciated him coming to me, but I’m still going to get his ass next week.”

What was entirely absent from the episode was any consequence at all for Frank’s behavior, beyond several players indicating that they want to vote him out next week. He went on to win the challenge and get even more power in the game.

The houseguests, including Da’Vonne, worked hard to not let this affect their game play, but there was nothing shown on television that suggested the producers condemned or prohibited his behavior in any way.

But then, Big Brother’s producers and CBS have previously  tolerated harassment in the house. Why would anything change now?