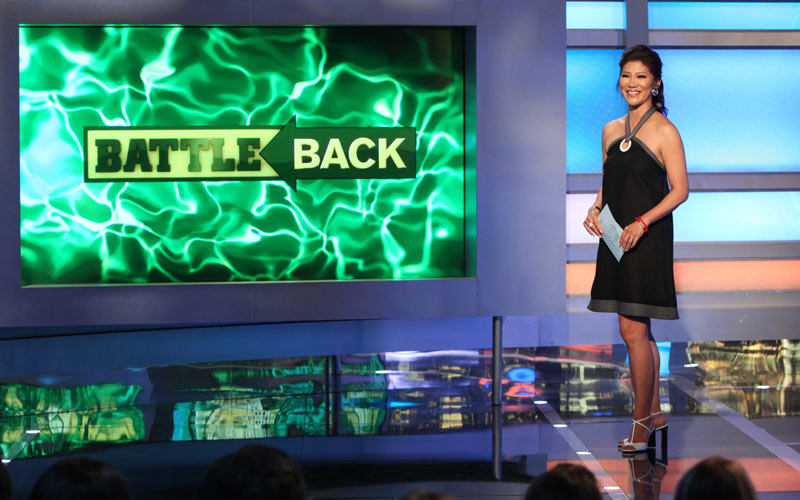 Big Brother has upped its challenge game this season. The limitations of the back yard still make it impossible to do Survivor-style challenges, of course, but the challenge team has been pushing those limitations in creative ways, thanks to the new back yard design. That’s especially true in terms of the set decoration, which really transforms the back yard into an entirely different space.

The challenges had their own episode tonight, as the Big Brother 18 version of Redemption Island or Last Chance Kitchen played out. The Battle Back gave the first five evicted houseguests the chance to reenter the game via a series of competitions.

When the first competition was revealed as a recycled HOH team challenge, I was a little disappointed. Of course, creating four new challenges—especially considering how elaborate the set decoration has become this season—for two players would be a lot. And I’m sure it was no small undertaking just to set up four different challenges in a relatively short period of time. (Update: It seems possible, if not likely, that the first three competitions may have been filmed shortly after the HOH competitions took place.)

But my disappointment faded immediately, and I was surprised to see how each of the first three challenges actually improved from its previous incarnation.

The balance beam, berry-fetching competition, for example, added a strategic component, the ability for each player to flush a column from their opponent. That led to one of the most tense moments of the episode, as Glenn went for his poison berry as Jozea went for his 10th, which would lock in his column and make Glenn’s poison berry useless. Jozea came from behind, and then he turned around and flushed Glenn’s column—and flushed Glenn out of the game.

The second round had the houseguests bouncing balls across the tennis court, but they had to 1) knock down pictures of their opponent and 2) act as their own ball retrievers. As fun as it was to wonder who the ball boys were during the live HOH version of that challenge, adding a physical component to the challenge made it more difficult and more entertaining.

The fourth competition was new, though reminiscent of one of the now-standard three final HOH competition: a massive puzzle on a wall that required Victor and Tiffany climb up the face of a massive build. The scale was impressive, and having them also have to listen in order to match times to band names (which were Big Brother references) was a nice touch.

The results of the BB18 Battle Back

After all four competitions, Victor reentered the house.

Here’s how it played out:

While the challenges were good, the production of the episode left something to be desired.

Julie Chen acted as host of the challenges, but it seemed very clear that she wasn’t actually talking to the competitors, but rather narrating footage that was previously shot. So Julie acted as if she was talking to the contestants, and they completely ignored her (because they weren’t hearing her).

After Victor won, Tiffany told him, “Trust Frank, don’t trust Da.” Julie Chen carefully pointed out to the houseguests that all the evicted players “were sequestered separately,” in order to preserve the integrity of the game, and then one contestant is just allowed to tell another something?

Those stumbles aside, having a Last Chance Kitchen for Big Brother makes perfect sense. If the show is going to bring someone back, the most fair way to do that is let them earn it, so this feels like the best iteration yet of the now-predictable a-houseguest-is-returning twist. And the challenges themselves can take a lot of that credit.