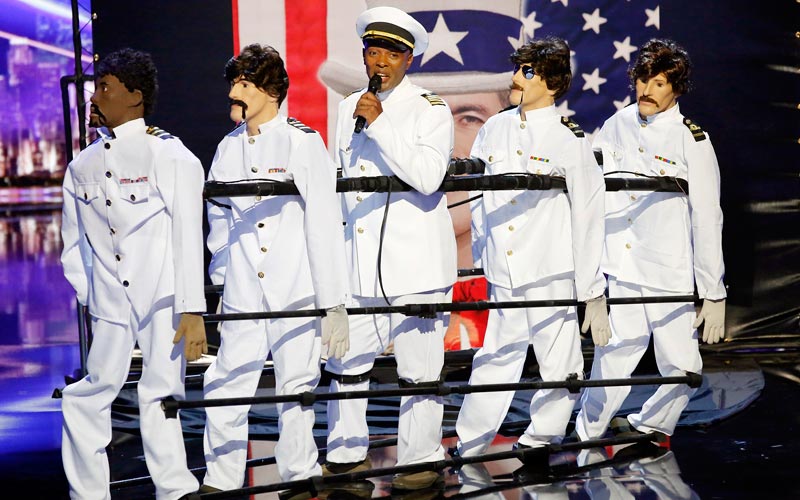 Christopher, 54, performs "In the Navy" with his puppets. (Photo by Trae Patton/NBC))

America’s Got Talent has reached its “judge cuts” rounds, four episodes of performances that result in eliminating most of those performers.

This is the most engaging stage in the competition for several reasons. First, we get to see our favorite performers again, though also our least-favorite, and all of them have to demonstrate that they’re not just one-note acts. Since many of these acts are recruited and/or have had national platforms before, including on NBC reality series such as Last Comic Standing, they need to demonstrate that they’re worthy of moving on. Can they truly grow and evolve on stage, which is what this competition requires—especially for non-singers, who really face pressure to make what they do seem different and special?

Second, the show is more efficient. Even with two hours and packages that give in-depth introductions to performers who didn’t get a backstory the first time, the show moves along at a faster clip, in part because the judges don’t have to go through the motions of voting. They also just can’t send through everyone and have to make tough choices.

Finally, there’s a guest judge who gets to see acts for the first time, providing us with a fresh perspective. This can backfire, especially since the guest’s golden button allows them to send an act straight through to the live shows, and I’m not quite sure the two acts that were golden buzzed last night were truly better than some of the acts that were sent home.

As a bonus, the red Xs are still in play, and that leads to my new favorite thing this season: watching the audience members behind the judges jump and react to the unexpected loud noise when a judge presses their button.

After two rounds of judge cuts, these are the acts that will make it to the live shows for a shot at making it into the semifinals:

While the auditions were not as strong as last year for me, this group mostly represents the strongest of the acts that performed Tuesday and Wednesday, but there are still some baffling decisions (#2, #7, #9, #12, and #13 and #14, mostly because I’d rather see non-singing acts).

Rubix cube magician Steven Brundage somehow did not make it through, and I’d easily swap him in for the Hara, the illusionist who does familiar tricks. I understand why Kadan, the 10-year-old magician, was sent on—his 10-year-old charm and stage presence is enough to overcome the relative easiness of his tricks.

When contortionist Vello was put through, Simon Cowell said to Heidi Klum, “You know America’s going to thing we’ve gone literally insane. What are they thinking?” An excellent question, especially since the judges cut this genius act.

Okay, yes, Christopher—who dances with four life-size puppets—has a one-note act, but his second performance was just as full of joy and life as his first. Here are both:

For me, the best acts this year have had terrific playful interaction with the judges. That includes jugglers The Passing Zone, who guest judge Ne-Yo said had “17 tricks all rolled into one, and you’re funny.”

Finally, I am usually anti-singer on America’s Got Talent. That’s mostly because of my fatigue over singing competitions, and because too many AGT singers feel like rejects from The Voice. But two singers—well, one singer and one a capella group—have really won me over.