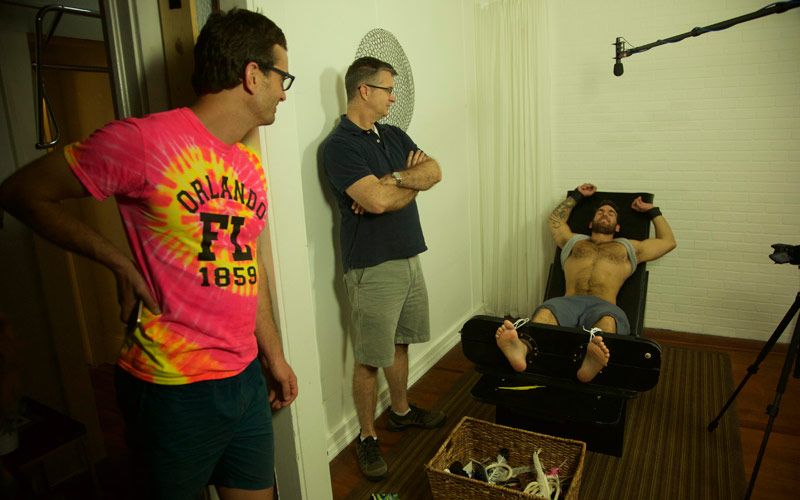 Tickled Director David Ferrier with Richard Ivey, center, the owner of the My Friends’ Feet web site, and "a tickle subject." (Photo by Magnolia Pictures)

Out today is a new thriller documentary that critics are comparing to Catfish, the documentary that spawned an MTV series. The film, Tickled, is about competitive tickling—but as its poster says, “it’s not what you think.”

Seth Abramovitch’s THR review says “it spins a gripping tale of sex, lies and (online) videotape in the same cyber-detective vein as Catfish.” Since debuting at Sundance in January, Tickled has earned positive reviews.

The film is in some theaters today, and HBO has acquired the television rights, though no air date has been set yet.

Here’s how Tickled describes itself:

“Journalist David Farrier stumbles upon a mysterious tickling competition online. As he delves deeper he comes up against fierce resistance, but that doesn’t stop him getting to the bottom of a story stranger than fiction.”

That “fierce resistance” came from tickling video producer Jane O’Brien Media, which responds to  Farrier’s request by attacking him personally—refusing to talk to a gay journalist—and making legal threats. One producer for Jane O’Brien Media is now working hard to discredit the movie on a web site he created, tickledmovie.info, while Farrier was sued for defamation twice, though both lawsuits were dismissed.

Why all the defensiveness? Watch the trailer: