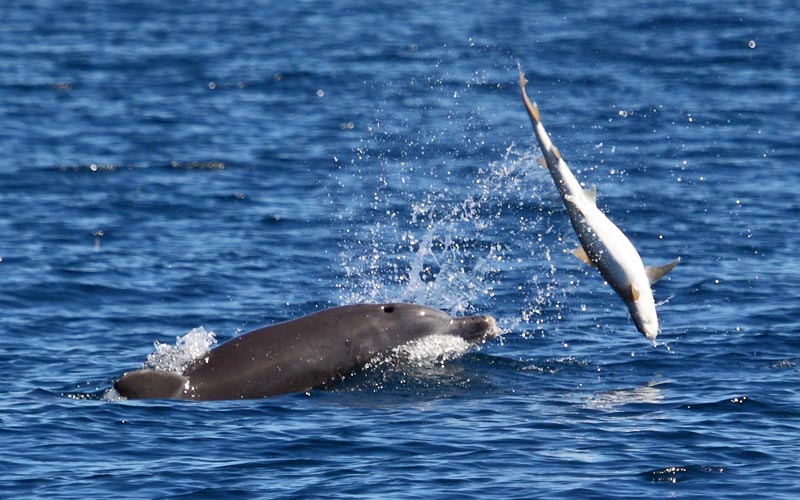 A dolphin knocks a baby shark out of the water in a scene from Sharks vs. Dolphins: Face Off, part of Shark Week 2016. (Photo by Discovery Channel)

The Discovery Channel’s Shark Week returns Sunday for its 28th year, and now its second year in a row of focusing on entertaining with truth rather than fiction. This year’s Shark Week includes 16 specials plus a five-night talk show.

Last year under, Discovery’s new leadership course-corrected and abandoned fake documentaries, resulting in Shark Week’s highest ratings ever. The most vocal critic of the earlier, misleading programming, shark researcher David Shiffman, analyzed this year’s line-up and only really objects to one show, concluding by saying “Shark Week seems to be making a serious, concerted effort to improve the quality of their programming from a low in 2013 and 2014.”

As part of their promotion of the week, Discovery representatives have offered one reality blurred reader a Shark Week prize pack; scroll down for details about how to enter.

This is the complete list of Shark Week specials airing this year, followed by Discovery’s description of each one.

Shark After Dark, the talk show hosted by Eli Roth, will air nightly at 11 p.m. from Sunday through Thursday.

“Dr. Neil Hammerschlag is the world’s leading tiger shark expert. Now, he’s on a quest to answer what he calls the trifecta of tiger shark science: where do these giant sharks mate, where do the pregnant females gestate, and where do they give birth? He hopes to find answers by tagging and tracking 40 individuals across a shallow area off the Bahamas called Tiger Beach. Second only to great whites, the tiger shark’s killing power and voracious appetite is legendary – and Neil has to deal with some aggressive sharks while on expedition.”

“Professional shark tagger Keith Poe, and marine biologists Greg Stuntz, Matt Ajemain and their team use state-of-the-art technology to try to document a live-predation of a thousand-pound mako shark — what fishermen call a “grander.” Granders are enormous makos that make a kind of transformation when they reach 10 feet and 1000 pounds – they become more secretive and begin to hunt bigger prey, like seals. And they’re hard to find on the East Coast – until Joe Romeiro and team jump in the water after dark and come face to face with them.”

“In 2016, award-winning shark cinematographer Andy Casagrande discovered that great white sharks had strangely and completely disappeared from the Neptune Islands off South Australia. Where did the sharks go? Searching west along the known great white migration route, he stumbles upon an incredible discovery – a concentration of all male great white sharks off an uncharted island. Andy calls in marine biologist Dr. Jonathan Werry, and together they get up close and personal with a dozen large great whites in the hopes of solving two of the most closely guarded of all the great white’s secrets… where they mate and where they have their young. Within this program, viewers will be able to immerse themselves into the adventure with virtual reality by using the DiscoveryVR app.”

“Using a self-propelled shark cage called ‘The Explorer’, marine biologists Mauricio Hoyos and Grant Johnson will investigate a recent discovery at Guadalupe Island – great whites moving into shallow waters at night. This movement shows that sharks entering shallow water are normal behavior – which would account for some of the shark encounters happening with greater frequency in the shallows along coastlines.”

“Marine biologist Greg Skomal and the REMUS SharkCam team return to Guadalupe to find the world’s largest great white shark, Deep Blue. This time, they deploy two robot subs: one that dives to 300 feet, and another that goes to 2000. Together, they build a profile of how the great white uses the entire water column. The team uncovers hunting techniques and strategies great whites use to ambush their prey—and film a great white’s attack on the sub!”

“Shark encounters are increasing around the globe. The solutions to deal with the public’s growing anxiety range from culling to using nets and drumlins—all of which kill sharks. Dr. Craig O’Connell believes he has developed a system that will prove once and for all that sharks and people can peacefully coexist—and live!”

Wrath of a Great White Serial Killer (Tuesday, June 28 at 9)

“A newcomer has taken residence in the waters of the Pacific Northwest… the great white shark. Shark expert Ralph Collier and Brandon McMillian seek answers to the main questions in this case – why are great white sharks traveling so far north and why are these encounters focused on this one particular place?”

“Famed shark photographer Chris Fallows embarks on his 8th Air Jaws adventure with shark expert Jeff Kurr and shark biologist Neil Hammerschlag as they discover how great white sharks hunt in total darkness. Narrated by Lena Headey (“Game of Thrones”), it turns out that great whites can hunt effectively with or without any sun or moonlight – but how do they do that?”

“Using cutting-edge research and thrilling historical evidence, Dr. Michael Domeier and Dr. Barry Bruce go looking for rare oceanic white tip sharks, to see if the species deserve the reputation as the ‘World’s Deadliest Shark.’ History says they are—and when the scientists dive in the Bahamas and off Hawaii, they’re spooked by this very dangerous shark.”

“Sharks and dolphins have shared the ocean for ages, but only recently, scientists have begun to understand the true nature of the relationship between these two masters of the sea. It’s hostile, and dangerous, mainly for dolphins. Dolphins would rather eat fish and swim with humans; sharks would rather eat dolphins and anything they can sink their teeth into. Dr. Mike Heithaus and his team bring new research that may solve why sharks attack dolphins far more than we ever knew.”

“Grandson to legendary underwater explorer and filmmaker Jacques Cousteau, Philippe Cousteau, and his wife Ashlan Gorse Cousteau travel with marine biologist Luke Tipple to Bikini Atoll to explore a marine environment once destroyed by nuclear testing during the Cold War. The nuclear devices detonated across the atoll vaporized two islands and destroyed everything living. Today, nature has proved resilient and restored the marine ecosystem, re-populating the atoll with reef sharks. But since reef sharks are considered non-migratory, where did they come from?”

“Marine biologist Dr. Craig O’Connell and Andy Casagrande travel up the Serena River in the rainforests of Costa Rica to try and find out why young bull sharks swim up the river, and how they avoid the 12-14′ American crocodiles living there. O’Connell deduces the sharks smell the crocs and creates a first-of-its-kind croc scent-based bull shark repellant—and SHARK WEEK reveals a possible important discovery that could save human lives.”

“There’s been a war going on between seal and great whites for millions of years. Now there’s a new battleground on the map called Cape Cod. It’s different in every way from the usual rocky islands where sharks and seals usually face off in other parts of the world. The great whites have had to learn new ways to hunt seals here. Dr. Greg Skomal and his team wonder, what are the sharks doing here, how do they get here, and how do more sharks learn of Cape Cod’s bounty of seals? And more importantly: if the number of seals and sharks continue to increase at the present rate, what’s the future?”

“Famed marine biologist and shark expert Barbara Block has been studying the white sharks off of California for more than 27 years. Now, with breakthrough camera technology and tracking technology, she’s giving scientists and viewers a portrait of a formerly unseen domain. She calls it the Blue Serengeti—it’s a vast, rich, and hidden world, now more visible thanks to new camera tags deployed on both predator and prey.”

“We scour the seas to bring you the greatest moments from SHARK WEEK 2016! Only the closest calls, biggest bites, and greatest gadgets made the cut! Then, we’re revealing your top picks for the best of SHARK WEEK history.”

“Dr. Jonathan Werry and shark cinematographer Andy Casagrande travel to a special location in South Australia to research a new great white hunting strategy, where they no longer wait for seals to enter the ocean—they come out of the water and snatch them from the shore! But is this unique to Australia? It isn’t; sharks are smarter than we thought and can learn new things when there’s food involved.”